With neighboring Iran diverting rivers and building dams, the Kurdistan Region of Iraq is in the midst of an already severe water crisis that threatens to get even worse, thanks to national and regional governments failing to acknowledge the urgency of the problem. 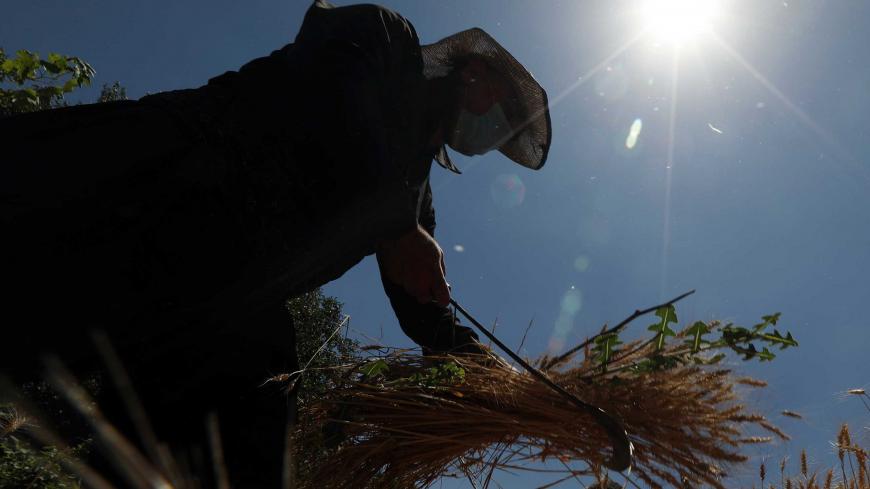 SULAIMANIYAH, Iraq — Dead fish lay in dry river beds, and a drinking water crisis is afoot, because neighboring Iran is diverting the flow of a river. The disaster that hit the towns of Qaladze and Khanaqin this summer has shocked the Kurdistan Region of Iraq.

Much of the problem, however, is far less visible. In the cool, green mountains near the Kurdish town of Biara, a walnut-growing area for decades, farmers complain that the mountain wells are drying up. Among them are Backtiar Hamakhan, who uses a spade to remove stones and sand to allow what little water there is to reach his trees. Despite this, the supply is no longer enough to fill his water cistern, and he watches as it flows downhill to his neighbor’s land.

“It’s been getting less and less for four years now,” Hamakhan sighs. “And now one of our two wells has completely dried up.”

Those who farm these slopes overlooking the rugged border area with Iran still remember how only forty years ago they could grow tomatoes and tobacco here. Now, as three of the 10 wells feeding the village of Balkha have dried up and the others are producing less water, the walnut years may soon be over as well.

On the slope near Hamakhan’s land, some farmers have installed pipes to transport precious water from their remaining well directly to their orchards. The surrounding hillside is drying up, because the water no longer flows along the riverbed. This has already resulted in a dispute, with one of the farmers going to court because he no longer gets any water.

Anyone with money drills a well and buys a pump, but these pumps are the cause of much of the problem, explained Shahpoor Ghaffar Amin, an engineer who owns an orchard on the hill. He works for the municipality of Halabja, at the bottom of the mountain. There, drilling wells is now prohibited, he said.

“But farmers go ahead and drill anyway, without a permit,” Amin remarked. “And because they use too much water, the water table has dropped tremendously.” The mountain wells have dried up due to the low level of the underground aquifers and the drop in water pressure.

The problems farmers face in Balkha are the result of a combination of longer, hotter and drier summers as well as the building of dams in neighboring Iran. Although Balkha still has water, it’s not clear for how much longer. The aquifer contains “old” water, meaning it is not replenishable by rainfall, but only after a long, natural filtering process.

About 93 miles away, in Khanaqin, the Alwand River's bed has been dry since June, when Iran finished a project to divert the river so it no longer crosses the border. This is part of Iran’s solution to its own problems, said Rozhan Faraidun, manager of the Earth Network, a nongovernmental organization based in Sulaimaniyah.

“We went to protest against it at the Iranian Embassy, but Iran is also suffering from the effects of climate change,” Faraidun remarked. “And apart from water, they also need electricity, so they built dams.” To be specific, Iran built 14 dams, most of which directly effect Iraqi Kurdistan.

Although the Kurds are talking to Tehran about the problem, they cannot sign any agreements to resolve it. That is the legal right and responsibility held by the central government, and Baghdad is not addressing the even more pressing water problems facing Iraq. Faraidun stated, “Tehran is under the impression that the Iraqi government does not care much about water management.”

As a result, in June, when Turkey, Iraq’s other neighbor, began to fill the lake behind the controversial Ilisu Dam on the Tigris, the river's water level fell so low that people in Baghdad could wade across it. The filling of the lake has been postponed, but Baghdad is not known to have taken measures to counter any future effects.

“The Iraqi government has priorities other than water — namely oil and money,” Faraidun said. Farmers from southern and central Iraq are already migrating to the Kurdistan Region, she observed, “in the hope of finding land and water so they can get back to farming or a job.”

Falling water levels in the Tigris do not significantly affect Kurdistan, which is only 40% dependent on water from outside, thanks to its underground lakes and streams being filled by winter snow from the Zagros Mountains. Decreasing aquifer levels and rising summer heat are, however, having an effect, with low levels in artificial lakes hindering the production of hydro-electricity in some places. Experts are pushing to revive plans for 18 dams in the Kurdistan Region that were suspended because of the recent recession.

Faraidun is calling primarily for education and increased awareness, but new laws are needed as well. “Unfortunately, the Kurdish government is not eager, because implementing them is hard,” she said.

For instance, a law is needed to prohibit the drilling of wells, Faraidun explained. In the city of Sulaimaniyah alone, there are now 600. “People do not understand that aquifers do not refill, even when it rains a lot,” she said.

One positive development is that Sulaimaniyah has begun to install water meters to reduce consumption, which, at more than 185 gallons per day per person, is among the highest in the world.

At the same time, Faraidun pointed out, projects to help farmers move away from water-intensive crops have stalled for lack of money and an aggressive government. Take for instance projects for rice farmers in Khellan, a village near Kurdistan’s border with Iran, where the Sirwan River is threatened by Iranian dams.

Sirwan Houssein and 69 other rice farmers in his cooperative already face water shortages, even before the last dam, the Daryan, is completed later this year. This summer, half of their lands remain uncultivated, and their harvest will drop from 200 to 35 tons per year.

“We need money, and the government does nothing!” Houssein exclaimed at the edge of a field whose rice plants stand partially submerged in water. Considering the water flowing past the field leaves the impression that all is well, but Hussein is quick to point out the problem: The farmers depend in part on a well that not only produces less than before, but also loses half its water to a nearby bottling factory. The rest comes from the Sirwan, but because its level has fallen, they need an electric pump that they cannot afford.

A big part of Kurdistan’s water crisis, Faraidun said, is due to failing governments. She continued, “Solutions need political decisions and money. We should be collecting rainwater in basins and planting olive and almond trees to create more humidity.”

It is also vital to decrease water usage. Baghdad has prohibited farmers from growing water-intensive crops this summer, but Kurdistan allows the rice farmers in Khellan to ignore the ban.

When asked why they do not grow another crop, the farmers claim that they tried growing watermelon, but found that they earned less. “Our rice is the best,” they say. “It’s what we know best, as we’ve done it for generations.”