The acute drought that Iran is going through has started to show its political face as lawmakers from crisis-hit areas protest the "unjust" distribution of the already shrinking water resources. 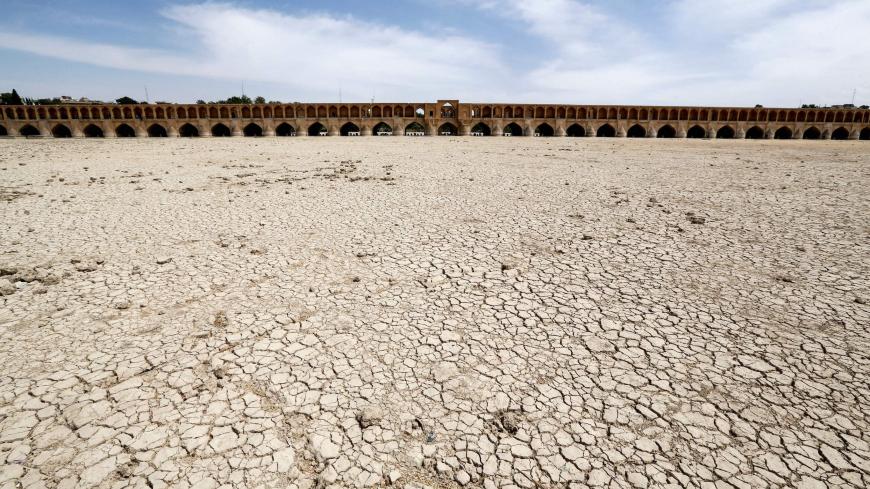 A general view shows the Si-o-Se Pol Bridge (33 Arches Bridge) over the Zayandeh Rud River in Esfahan, which now runs dry due to water extraction before it reaches the city, Esfahan, Iran, April 11, 2018. - GETTY/Atta Kenare

Eighteen lawmakers representing constituencies from the central Iranian province of Esfahan, where water scarcity has reached an alarming state, have resigned collectively in a symbolic move against what they believe is an unfair distribution of water resources. In response, their counterparts from three other provinces, which share the same water supplies, hit back. They demanded in a public letter that the heads of the three branches of the Iranian state — president, parliament speaker and judiciary chief — as well as the country's powerful Supreme National Security Council intervene to bridge the widening divide over who should have more water.

The latest confrontation has not been without a precedent. Last August, Iran's interior minister reported at least 20 water-related clashes, some of them deadly, in a period of less than 140 days.

Local tensions over water resources in Iran are not a novelty either. In recent years, the crisis has not only worsened but has also witnessed new implications. Provinces that were traditionally considered water-rich areas — such as west Azerbaijan, east Azerbaijan, Kohgiluyeh and Boyer-Ahmad, Chahar Mahal and Bakhtiari, Khuzestan, Mazandaran, Gilan and Golestan — are already battling it out to win the bigger share, bringing the fight to political levels in the open.

The collective resignation by parliamentarians Dec. 5 was specifically a protest against the government's decision to take off Esfahan province water transfer projects from next year's budget bill. The angry lawmakers are still digging in their heels. The key water supply of the province is Zayandeh Roud, central Iran's longest river originating from springs in Chaharmahal and Bakhtiari province. Distribution of water from Zayandehroud has been the main driving force behind tensions between the authorities in Esfahan and the neighboring provinces of Yazd, Chahar Mahal and Kohgiluyeh as well as Khuzestan further away in the southwest.

While seeking solutions in their public letter against the resignation by their colleagues from Esfahan, lawmakers from Chahar Mahal, Kohgiluyeh and Khuzestan implicitly warned that the gesture could fan the flames of water-related conflicts.

Similar differences are also growing elsewhere between the three northern water-rich provinces of Gilan, Mazandaran and Golestan on the one hand, and the central provinces of Semnan and Markazi on the other. Semnan is the birthplace of President Hassan Rouhani, who only one day before the Esfahan parliamentarians' resignation promised cheering crowds there an ambitious water diversion project from the Caspian Sea. The pledge, however, was met with fury from lawmakers representing the three northern provinces on the shore of the Caspian Sea. Rouhani's words angered even his allies in parliament. This case has rallied Rouhani supporters and opponents behind one flag in the opposition against him.

"This treason will not be permitted," one pro-Rouhani member of parliament warned about the project.

Earlier, the water crisis had already pitted parliamentarians from Sistan and Balouchestan province against Foreign Minister Mohammad Javad Zarif over Iran's share from the Hirmand River running in from the Afghan border. An older water-related political conflict in Iran is the constant and unsettled tension between lawmakers from west and east Azerbaijan provinces, and different sitting governments over Lake Urmia's critically falling levels.

Such a background of political implications of Iran's water crisis has in recent years triggered public protests, in many cases turning ugly, with security forces making arrests in their heavy-handed response. The latest of such unrest rocked Khuzestan province last summer.

To overcome the crisis, the Iranian government has launched at least 10 water transfer megaprojects in the target areas. The projects, however, remain incomplete and have only complicated the situation by sparking protests in areas from which water is meant to be transferred to drought-hit regions.

Given the current circumstances amid the deteriorating water scarcity, the political ramifications and the public-level tensions are expected to only grow further. The graveness of the crisis was laid bare last August by head of the country's Environment Department Issa Kalantari, who warned that Iran's water resources would completely vanish within 40-50 years. He had already raised the alarm on a mass exodus of inhabitants from the areas suffering from water shortages.

This was corroborated in a 2018 NASA report that underlined a looming water crisis in Iran, where large swaths of territory could turn into complete deserts in 30-40 years' time. The study also places Iran on the fourth in a list of 45 countries believed to be on the verge of drought.

With the threat getting increasingly serious, Iran's Ministry of Energy has set up the Center for Water-related Social Affairs. The director, who serves as an adviser to the country's energy minister, has made it clear that the center cannot create miracles in the short term.

As a deep-rooted crisis with multiple aspects, Iran's water problem continues to unmask its social and political face. Prospects for a successful handling of the issue are also bleak as the existing statistics paint no positive picture. During last summer alone, 34.5 million Iranians across 334 cities and towns were exposed to water tension. This has also left negative impacts upon an economy already facing serious threats from US sanctions and has provoked widespread discontent from Iranian citizens.

Despite the alarmingly complex situation, little has been done to contain the social tensions triggered by Iran's water crisis. To make matters worse, politicians are on no good terms and remain vigorously engaged in a conflict over how to address the problem. The continually unresolved tension could serve as a catalyst by fueling fury at different social levels. Only time will tell, therefore, where the vicious cycle will end.