A new, grim estimate says Iran's already underdeveloped Sistan-Baluchistan province will have to brace not only for a worsening water crisis but for ripple effects as well, including severe economic and social repercussions. 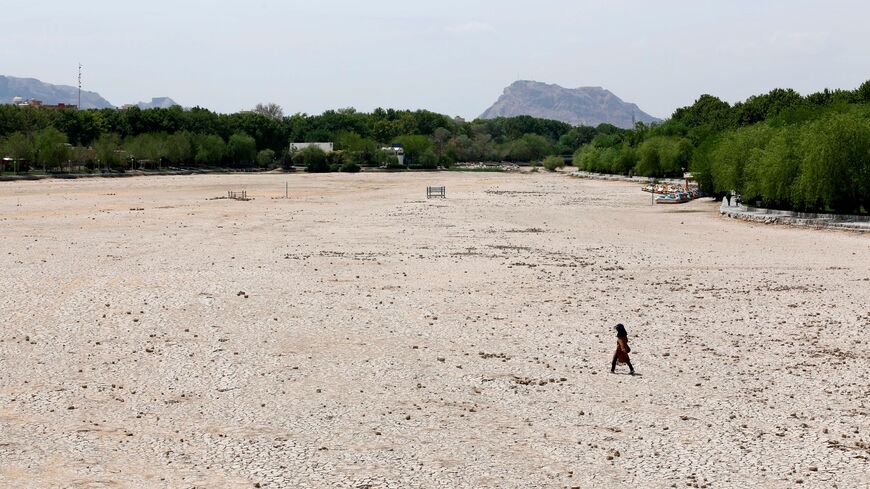 An Iranian girl walks across the Zayandeh Rud river in Isfahan, which now runs dry due to water extraction before it reaches the city on April 11, 2018. - ATTA KENARE/AFP via Getty Images

The director of the state-run Office for Meteorology in Iran's southeastern Sistan-Baluchistan province has painted one of the bleakest pictures ever for the impoverished area's water shortages.

According to Mohsen Heydari, all-time low precipitation over the past months is only complicating the consequences of a decade-long drought in the region. Heydari told Iran's Tasnim News Agency that over 95% of the entire province is now effectively engulfed by drought.

The province has recorded a total of only 4.3 millimeters of rainfall over the past year, which Heydari fears "would deal irreparable blows to the [area's] economy, natural resources and agriculture."

Yet the implications do not stop there. In a stern warning, the Iranian official expressed concern about "social and economic droughts" due to the tremendous impacts of the water shortages upon the livelihood of the locals.

Plagued by decades-long insecurity and perceived discrimination, the province populated by Iran's Sunni Baluch minority is already coping with one of the nation's highest unemployment rates, as well as low indices of literacy and welfare.

Ordinary Iranians are feeling the pinch of drought in their daily lives. Weeks of furious and deadly protests shook the southwestern province of Khuzestan in summer, and similar but larger rallies in the central city of Isfahan late November, were crushed by Iran's riot police.

Blaming part of the crisis on global warming, Iranian officials have promised action. To the Iranian protesters, however, the main culprit is the ruling establishment's overall mismanagement of water resources, such as unregulated dam construction and the transfer of water from relatively water-rich areas to dry regions housing major industries. The projects are believed to have drained the vital underground reserves, especially in wester provinces.

Iranian authorities are also facing criticism over securitizing and politicizing the water crisis by refusing to heed alarm bells and instead accusing some experts of "espionage" and working for foreign enemies.

Madani argues that Iran has reached "water bankruptcy."  In his metaphor, the balance sheet of Iranian water is in the red and "the check has been bounced," as the gap between Iran's water resources and its consumption is widening with unprecedented pace.