The election of the first female mayor by the city council of Kalat in the Sistan-Baluchistan province can open doors for many other woman in a province where woman face societal discrimination. 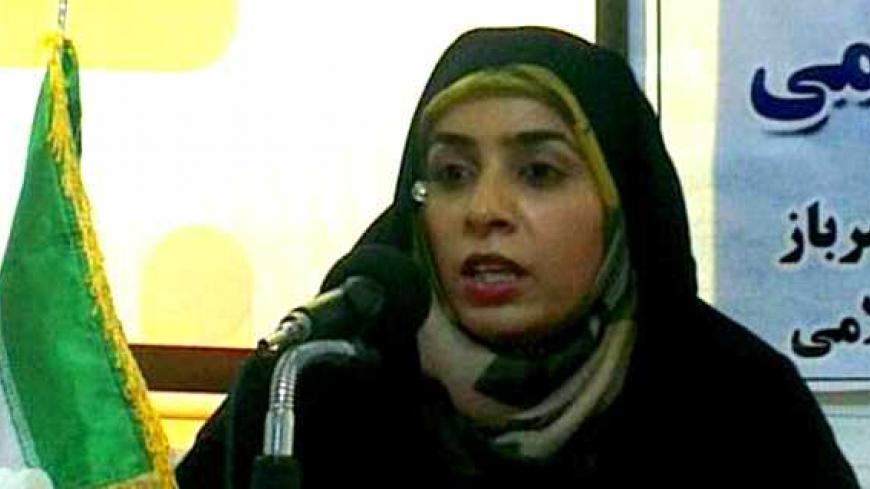 Samiyeh Balochzehi, 26, was elected mayor of Kalat in Sistan-Baluchistan, an unprecedented event in one of Iran's most conservative provinces. She is an engineer with a master's degree in natural resources management. - Asrehamoon

A correspondent in Tehran
December 5, 2013

The election of the first Baluch woman last week as the mayor of Kalat, a city in the south of Iran, was an unprecedented event in one of the most underprivileged and conservative provinces in Iran. It is a significant step which local experts believe that can inspire Baluch women to work for more rights and break boundaries that have been created by both the state and society.

Samiyeh Balochzehi, 26, who was elected mayor by the Kalat city council, is an engineer and has a master’s degree in natural resources management from the Islamic Azad University Science and Research Branch in Tehran. A local who spoke to Al-Monitor on condition of anonymity said that Balochzehi is a widow, that her sister is on the city council and that she comes from a wealthy and influential family.

The five-member city council voted unanimously for Balochzehi. The significance of the election was not lost on the president of Kalat’s city council, who, according to a local website, Baluch Press, said, “The election of a Baluch woman can encourage local women. This could be an opportunity for all those who are, in spite of their qualifications, isolated from society.”

The province of Sistan-Baluchistan is situated in southeastern Iran and at 187,502 square kilometers [72,395 square miles, roughly the size of Washington state] is Iran’s largest province. From the north of the province to the city of Zabol (famous ancient city) is the region of Sistan, whose population is mostly Persian-speaking and Shiite. The Baluch people, who speak Baluchi and are Sunni, populate the area between Zahedan and Chabahar, in the south of the province. Of the 2.6 million inhabitants of the province, approximately 65% are Baluchi.

This province has historically suffered from political repression, economic deprivation, and has witnessed violence through terrorism from extremist Sunni groups and drug smuggling.

According to the head of the Literacy Movement Organization of Iran, in an interview with the Ghanoon newspaper, the province of Sistan-Baluchistan has the worst literacy rate for those ages 10 to 49 in Iran. The province also has the highest number of married girls under the age of 15. According to the 2013 demographic report, in Tehran only 0.8% of girls under the age of 15 are married. In Sistan-Baluchistan, however, the number is 2%.

The city of Kalat stands out as being a particularly traditional and conservative area in Iran, with many societal restrictions on women. Also, according to the Criminology Center of Tehran University, there is a high level of violence against women in Sistan-Baluchistan.

However, it appears that Balochzehi has overcome these barriers. One of her acquaintances who spoke to Al-Monitor said that Baluchzehi is not like most woman from Kalat. “She only knows how to make spaghetti and that is because as a student she has lived away from home for a long time,” the acquaintance said, attempting to demonstrate how Balochzehi has ignored the traditional role of women in society. The acquaintance credits the support of her wealthy and influential family in allowing her to break with tradition. “Her father is an admirable man. When his daughters were going to school, they had his complete support.”

The support of her family will be necessary if Balochzehi is to be successful. Based on the information gathered by Al-Monitor, the municipality of Kalat, which is to be directed by Balochzehi, has no female employees. There are 16 men working at the municipality; five of them are full-time employees and the rest are part-time.

A Baluch university professor told Al-Monitor, “This young lady will have a difficult time given the conservative and patriarchal atmosphere of the city of Kalat and the all-male staff of the municipality. But she is lucky since, because of her father, she has powerful and influential supporters such as the local clerics and community elders.”

Mohammad, who is from the Sarbaz area, which is part of the city of Kalat, described Kalat as “a small city with three banks, a local administrative office, one clinic and few shops. The city works like an office. It starts in the morning, people from nearby villages come to shop, and in the evening the city shuts down. It only has about 10,000-15,000 inhabitants.”

This Baluch citizen also believes that the new mayor has a tough road ahead: “People of that region are very conservative, especially when it comes to women. I cannot stress that enough. It is the most conservative city in Baluchistan. For example, until just a few years ago many would not allow their daughters to attend university. But thankfully the situation is improving.”

The armed Salafi supporters of al-Qaeda, such as Jaish al-Adl, which is a branch of Jundallah, are also active in Baluchistan. From time to time there are bloody conflicts between these groups and the Iranian armed forces. These armed groups, because of their radical religious conservatism, are strongly opposed to the idea of women as active members of the public sphere.

One of Samiyeh Balochzehi’s friends, however, says that the new mayor will not back down. She told Al-Monitor, “I asked her if she thinks she can succeed given the male-dominated environment that she has to work in. She responded that she does not doubt her own abilities.”

According to local Iranian media, in her introduction ceremony, Balochzehi laid out some very modest goals. She said that she would focus on “building parks and recreational centers for woman and children” in addition to other restoration and renovation projects.

Even if Baluchzehi is not successful in her endeavors as mayor, however, a sociologist in Tehran who specializes in woman’s issues told Al-Monitor that Balochzehi’s new position may have a symbolic impact that can open doors for other woman. “It will help break taboos for women,” the sociologist told Al-Monitor. “It will give them confidence. Baluchistan is very conservative, but we should remember that after the revolution and the Islamization of schools, more families were willing to let their children attend school and university. People like Samiyeh encourage the other educated girls to become active members of society instead of staying at home.”

The lack of media attention, however, demonstrates how ignored this province is and how far they still have to go. News of the first female Baluch mayor was not really reflected in either the reformist or the conservative newspapers. The only media to reflect this news were the local Baluch press. A journalist working for the reformist Shargh newspaper said that he had not even heard of it until I informed him. He believed that the nuclear deal and the domestic disputes have overshadowed this unprecedented news.