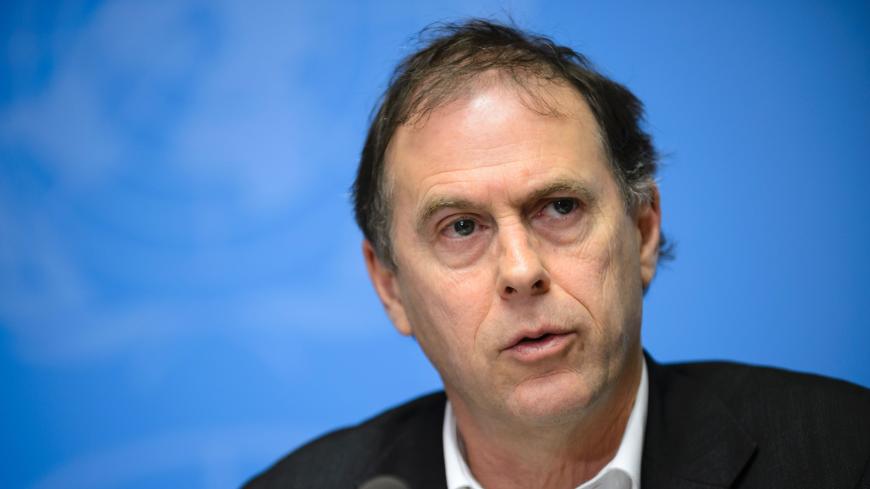 UN High Commissioner for Human Rights spokesperson Rupert Colville give a press briefing on Jan. 29, 2016, in Geneva on new claims of child abuse by foreign troops in Africa.

The United Nations said Friday that as many as 23 people were killed in Iran’s impoverished Sistan-Baluchistan province when authorities opened fire on fuel porters and protesters last month.

In an effort to crack down on the cross-border fuel trade, Iran’s Revolutionary Guards reportedly use live ammunition on a group of people transporting fuel across the Iranian border with Pakistan. Citing local monitoring groups, Human Rights Watch said shooting on Feb. 22 left at 10 Baluchi people dead and five injured in the town of Saravan.

The shootings sparked protests across southeastern Iran, during which security forces reportedly fired on the crowds to disperse them. According to Baluchi human rights defenders, two people, including a child, were fatally shot during the protests.

The UN’s human rights spokesman, Rupert Colville, told a news briefing in Geneva on Friday that as many as 23 fuel porters and protesters may have died, but the true number is difficult to verify.

“The series of violent events and unrest began on 22 February, when Revolutionary Guards are alleged to have shot and killed at least 10 fuel couriers, known as sookhtbar, in Sistan and Baluchistan Province at the border with Pakistan, after a two-day stand-off triggered by the Islamic Revolutionary Guard Corps blocking the road to the city of Saravan,” Colville said, according to Reuters.

Located along Iran’s border with Pakistan, Sistan-Baluchistan is among Iran’s poorest provinces and is rife with drug traffickers and separatist ethnic Baluch militants. The region is majority Sunni Muslim, whereas Iran’s population is majority Shiite.

Baluch rights activists organized a demonstration in the Pakistani port city of Karachi this week to protest the violence, RFE/RL reports.