The Iranian city of Saravan is reeling after security forces shot several unemployed locals who earn a living by trading untaxed fuel across the Pakistani border. 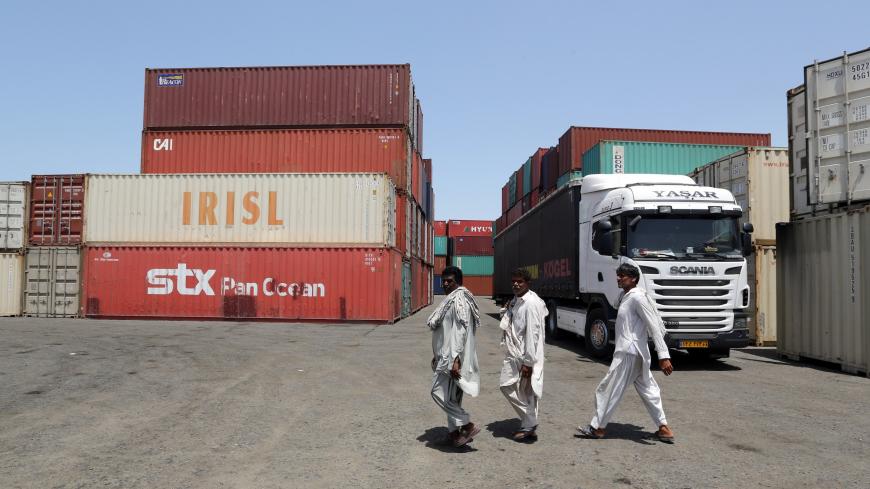 Iranian workers walk near containers at the Kalantari port in city of Chabahar on May 12, 2015. - ATTA KENARE/AFP via Getty Images

Videos inundated social media showing protesters storming the governor’s office. Outside the building, police cars were set ablaze as security forces tear gassed the crowds. Roads to the city were closed off and internet connections were down in most areas.

The turmoil came after the Islamic Revolutionary Guard Corps (IRGC) opened fire at a number of local Baluchis trying to smuggle fuel across the border to Pakistan. According to activist groups, up to 10 people were killed and scores of others were injured in the shooting. Eyewitness accounts heard on the videos put the death toll at over three dozen.

Iranian officials have so far confirmed at least two deaths. Tasnim News Agency, affiliated with the IRGC, offered a different narrative, saying the rounds were fired from the Pakistani side of the border and that Iranian forces were not responsible.

Human rights monitors campaigning for the rights of the Baluchi ethnic group said the deadly shooting began after the fuel traders, stuck for two days at the border, attempted to make their way over IRGC trenches.

Locally known as sookhtbars, the fuel carriers take untaxed fuel into Pakistan as their only option in the face of extreme unemployment. The province has one of the highest rates nationwide.

Fears are now growing that the accumulated rage may spill over to other cities in Sistan-Baluchistan. The province witnessed an iron-fist response from security forces back in November 2019, when Iran was rocked with discontent over a government plan to increase fuel prices.

Sistan-Baluchistan has for decades been Iran’s most restive region. The Islamic Republic’s crackdown on the Sunni minority has also served as a breeding ground for radical groups that every now and then launch violent attacks against security forces. Iran accuses neighboring Pakistan of harboring the militants, a charge that Islamabad denies.

Iran’s judiciary has also intensified its clampdown on Sunni Baluchi activists. At least five of them have been executed in local prisons since January. Over 120 other inmates are also on death row in the central prison of the provincial capital Zahedan.

Despite the overall state of neglect, Sistan-Baluchistan has in various presidential elections posted significantly high voter turnout, likely in hope of the minimum development and equal rights promised by moderate candidates, including President Hassan Rouhani.

However, the Rouhani administration’s perceived failure to live up to those promises seems to have further added to the disillusionment of the locals. “The Rouhani government has not met the satisfaction of the Sunni minority,” Mowlawi Abdul-Hamid, a top local Sunni cleric and Friday prayer leader, said in August.

“Nowhere in the Iranian constitution is there any mention that Sunnis cannot be appointed as ministers, presidential deputies or governors,” he complained, echoing a recurring demand from Iranian Sunnis, who argue that they are being systematically sidelined by the ruling Shiite government.