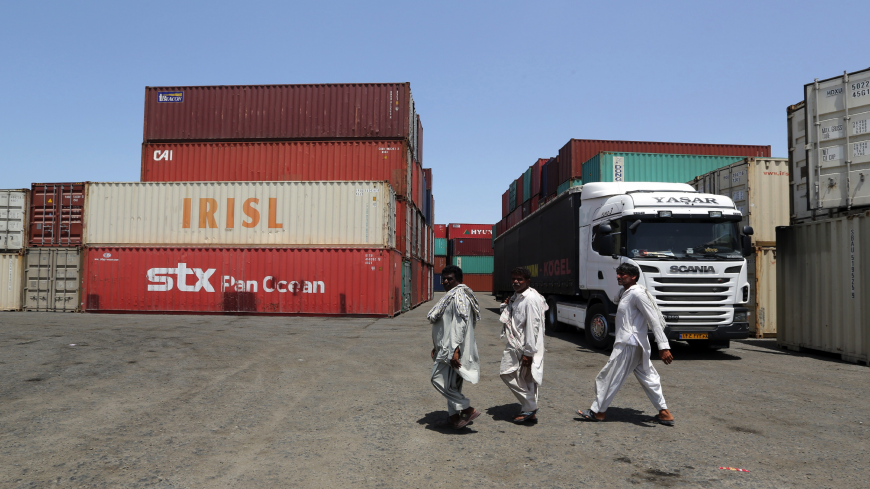 Iranian workers walk near containers at the Kalantari port in the city of Chabahar on May 12, 2015. Chabahar, located on the coast of Sistan-Baluchistan, is open to the Oman Sea and the Indian Ocean. It is Iran's gateway to Pakistan and Afghanistan in the east, the Central Asian countries to the north, and Turkey and the Gulf countries in the west. - ATTA KENARE/AFP via Getty Images

Angry protests continued to break out several cities across Sistan-Baluchistan province for the third day in a row. According to local activists, at least two more people were killed, bringing the overall death toll to 12. Those figures, however, have been denied by Iranian officials.

The turmoil began in the city of Saravan earlier this week after members of the Islamic Revolutionary Guard Corps opened fire on unemployed locals who have been struggling to earn an income by carrying untaxed fuel across the border to Pakistan.

The killings prompted demonstrations from angry people who broke into the governor’s office in Saravan. Yet in the past two days, the rage has spilled over into other cities, including Mehrestan, Iranshahr and the provincial capital, Zahedan, where a heavy police presence has been reported.

In an attempt to curb the tension, Iranian officials have largely disrupted internet connections across the province, making it harder for protesters to organize new gatherings.

While authorities said at least one officer had been killed by “armed gangs” during the clashes, they declared the situation “under full control” across the province. Still, videos came out purportedly showing people storming new military bases and public institutions.

Mowlawi Abdul-Hamid, a top Sunni cleric and Friday prayer leader, urged the protesters to exercise restraint and avoid attacking military and civilian institutions. He also called on the Iranian authorities to punish those behind the deadly fire on the fuel traders.

Meanwhile, exiled Iranian Nobel Peace Prize winner Shirin Ebadi attempted to echo the plight of the Baluchi protesters. “Amid the silence of international institutions, the Islamic Republic is committing crimes in Iran,” she wrote on her official Telegram channel. Ebadi also argued that “had the international community reacted properly when Iranian authorities shut down the internet and massacred people in November 2019, the Islamic Republic would have not comfortably resorted again to the same tactic in Sistan-Baluchistan.”

Ebadi was referring to the deadly clampdown on nationwide rallies over the 2019 fuel price hikes that left at least 200 Iranians dead. The same reminiscence of the 2019 crackdown was reflected in an open letter by the Iranian Center for Defenders of Human Rights. The group called on the UN Human Rights Commissionaire to immediately investigate “the Islamic Republic’s brutal killing of the defenseless and impoverished people of Saravan.”