Israel is worried that the Americans are heading for an interim agreement with Iran that will wipe away the sanctions. 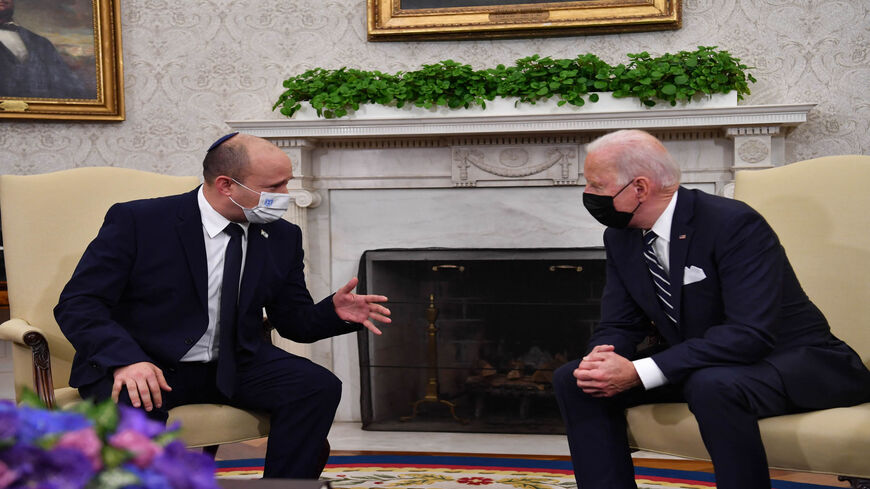 A week before the resumption of the Nov. 29 Vienna talks between Iran and world powers on a return to their nuclear agreement, a significant deterioration has emerged in one of the most intriguing and sensitive arenas of this ongoing saga — not between the United States and Iran but rather between the United States and Israel. In Israeli slang, this development would be called “shooting inside the tank,” in other words, instead of shooting at the enemy, the allies are targeting each other as they prepare to storm the other side’s forces.

It began behind closed doors with veiled hints and exaggerated politeness, but went on to trickle down and out into the public domain. Over the past week, Israel and the United States appear to be waging a public fist fight in the media. Right now, the skirmish is confined to snide remarks, exchanges of irate messages and signals of mutual dissatisfaction. Neither side wants an escalation. Israel does not have any other strategic ally while the Biden administration — despite being conciliatory toward Iran — views Israel as a strategic asset and does not intend or want to fight it.

To the credit of the Americans, it should be said that Israel started it. To Israel’s credit, let it be said that it had no choice. First came anonymous briefings by senior Israeli officials over the past two weeks according to which the United States was determined to return to the Iran nuclear deal at all costs. The briefing remarks escalated, accusing the United States of willingness to reach an interim agreement with Iran in return for a lifting of sanctions and a freeze on continued uranium enrichment — a complete capitulation to Iran, according to these unnamed officials.

Israel views this approach as unadulterated, disastrous defeatism. On Nov. 15, when President Joe Biden’s Iran envoy Robert Malley visited Israel, a meeting with Prime Minister Naftali Bennett was not on his schedule. Malley met with Defense Minister Benny Gantz and Foreign Minister Yair Lapid, as well as the head of the National Security Council Eyal Hulata, but Bennett did not invite him to meet. This was explained in Jerusalem by citing protocol that does not oblige a prime minister to meet a visiting senior official, but everyone knows that under normal circumstances, Bennett would have been keen for a meeting with a special envoy who holds the administration’s Iran portfolio. These, however, are not normal circumstances.

An associate of Bennett, who spoke on condition of anonymity, quoted him saying this week, “I am concerned, very concerned. We will not enter into a clash with our American friends at any cost, but we must make our views clear about what is happening and about the intention to start easing sanctions without even returning to the previous deal. This is simply a disaster and it is happening at a critical juncture of growing unrest in Iran. The West will simply be throwing Iran a lifeline. We cannot allow that to happen.”

Addressing a Nov. 23 conference of the Institute for Policy and Strategy at Reichman University near Tel Aviv, Bennett reiterated what he had said in the internal meeting. “The Iranian regime is being corroded, with a weak economy and corrupt regime. … Iran is much more vulnerable than is commonly thought,” he said. “We face complicated times. It is possible that there will be disputes with the best of our friends.”

The harsh language stems mostly from the fact that Israel finds itself alone on the battlefield. Defense Ministry Director General Amir Eshel, formerly commander of the Israel air force, said in a radio interview Nov. 21 that the Israel Defense Forces (IDF) were ready and able right now to attack Iran and cause heavy damage to its nuclear program. Bennett, Gantz and Lapid have allocated billions of dollars for a speedy buildup of military capabilities to strike Iran, and Bennett has instructed the IDF and the Mossad to prepare to thwart the Iranian nuclear program. The West has attributed recent cyberattacks in Iran — including this week’s attack on Mahan Air, a private Iranian airline carrier, after last month’s disabling of half the country’s fuel pumps — to Israel, which has not assumed responsibility for them.

This past week, the Americans appear to have lost patience. The response came in a series of New York Times reports saying senior US officials had recently told their Israeli colleagues the bitter truth. All the attacks, sabotage, mysterious explosions, assassination of the father of Iran’s nuclear program and the cyberattacks have not blocked Iran, on the contrary, the Americans reportedly said. All these operations, they reportedly added, simply prompted Iran to accelerate its nuclear program. According to these reports, Iran had successfully repaired all the nuclear facilities that had come under attack, upgraded them and resumed work under better conditions.

The leaks seem to have been the administration’s way of making clear to Israel that continued aggression would bring down the entire strategy, just as the Trump administration’s “maximum pressure” policy failed to yield the desired results.

What is more, in explaining why it avoided responding to an Oct. 20 attack by five explosives-carrying drones on its al-Tanf base in Syria, attributed to a militia under Iranian influence, the United States said that strike was actually a retaliation for Israeli strikes in Syria. Nonetheless, when asked last week at the Manama Dialogue forum about the lack of a US response, even Defense Secretary Lloyd Austin and presidential adviser Brett McGurk insisted that the United States was reserving the right to protect itself and its allies in the region. Most of those present at the event were not convinced. The general sense in the Middle East, among the moderate Sunni axis and Israel, is one of abandonment. The way these states all see it, the only ones who can be relied on right now to stop Iran are the Israelis.

If the sides do indeed adopt an interim agreement freezing Iran’s uranium enrichment and lifting most of the US economic sanctions, Israel will have to make a decision. Will we see a repeat of the events of 2010-2012 when the Obama administration mounted a strenuous and ultimately successful campaign to convince Israel not to strike Iran? It would appear so. Bennett is more determined than was his predecessor Benjamin Netanyahu in 2010 and the sword, as the late Mossad Director Meir Dagan was fond of saying, “is poised on the neck.”

Foreign Ministry Director General Alon Ushpiz told Al-Monitor this week that Israel was closely monitoring events, including US officials’ comments at the Manama Dialogue. “They made clear that they will not enter into an exchange of blows with the Iranians, but a time may come when they will have to make clear in harsh and no uncertain terms that they will not allow anyone to attack them. As for Israel, we have a clear policy, we will know how to defend ourselves and our interests,” he said.

Bennett himself spelled it out at his speech to the security conference at Reichman University. “The mistake we made after the first nuclear deal in 2015 will not repeat itself. … In any case, even if an agreement is renewed, Israel is not a party to the deal, Israel is not committed, and will not be committed, to an agreement.”