Left-wing members of the government held a conference at the Knesset dedicated to what they consider a significant increase in violence by West Bank settlers. 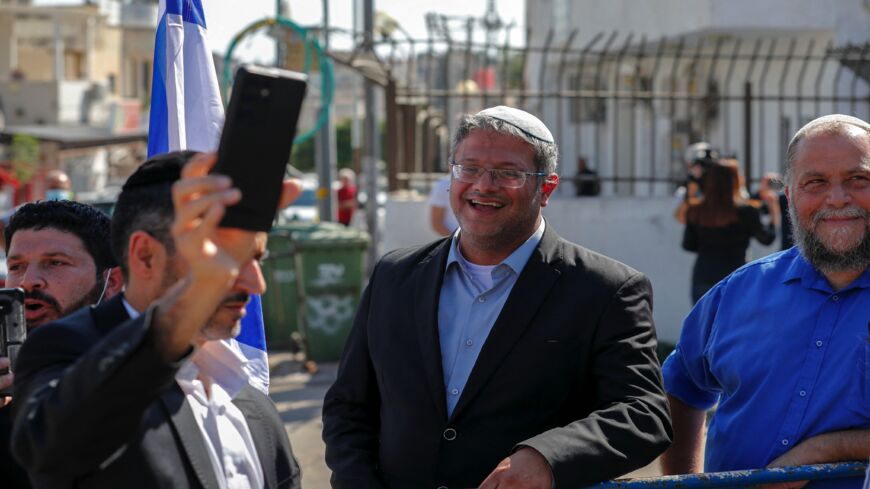 Itmar Ben-Gvir (C), member of Israel's Knesset (parliament) and head of the one-man far-right "Jewish Power" (Otzma Yehudit) party, and supporters demonstrate in the predominantly Arab town of Kfar Qasim in central Israel near the border with the West Bank on Oct. 5, 2021. - AHMAD GHARABLI/AFP via Getty Images

The fact that the two events coincided was typical of the tense state of Israeli security affairs. On Nov. 22, while the Knesset was discussing a rise in settler violence targeting Palestinians, a 25-year-old Israeli named Eliyahu David Kay was being laid to rest. Kay was killed in Jerusalem’s Old City a day earlier by a member of Hamas.

The combination of these two events turned a conference organized by members of the Knesset from the left into the site of a bitter clash with far-right members of the opposition. They argued that holding the conference when funeral services were being held for a man killed solely because he was a Jew showed an extreme lack of sensitivity.

That same morning, members of the Religious Zionist party and others tried to prevent the conference from taking place at all. They appealed to the speaker of the Knesset, Mickey Levy, asking him to cancel what they called “a conference of incitement and hatred.” They explained their opposition to the event, saying, “While Jewish blood is being spilled like water in the streets of the Old City, right next to the last remnant of our Temple, the Knesset is planning to host a conference led by the extreme left in the government on how to stop settler violence.”

Oded Revivi, head of the Efrat local council south of Jerusalem, is considered a moderate voice within the settlement movement. He wrote, “Since last Thursday, we have counted one dead and others injured in Jerusalem. Someone needs to tell the people behind the incitement — the people who scream ‘settler violence’ — that they are exaggerating the number of victims and the scope and regularity [of the violence]. The Knesset is not the place to deceive the public. Taking a marginal phenomenon and using it disproportionately to stain an entire sector of the population borders on a lack of logic and integrity.”

In response, Knesset members from the left said that while they share in the grief of the family of Kay, they cannot stand idly by in the face of the violence raging in the West Bank, which targets innocent Palestinians.

It seems as if a conference like this in which three ministers from the Meretz Party participated could not have taken place in the last decade during the various Netanyahu governments. It certainly would not have been such a high-profile event. There is no doubt that the organizers of the conference — legislators from the Labor Party, Meretz Party and Arab Joint List, along with left-wing groups opposed to the occupation — felt that they had a certain level of support, given indications of a change in government policy under Defense Minister Benny Gantz, who heads the Blue and White party.

Gantz recently asked senior Israel Defense Forces officials not to stand aside but to intervene when they encountered instances of settler violence. A few days ago, he also ordered the IDF to return the corpse of a 14-year-old boy to his family after he was shot and killed by Israeli troops. It is also worth noting that in the weeks and months preceding this, the government began showing a change in attitude toward Palestinian President Mahmoud Abbas. It renewed contact with him, including meetings with Israeli ministers, after years of deadlock in the peace talks and open hostility.

The conference that took place on Monday should be seen in this context. It is an interesting development in government policy that has come about because, for the first time in two decades, the Meretz Party and other left-wing Zionist parties have a respectable level of representation in the government and its Security Cabinet.

Organizers explained that the reason for this conference was a sense of urgency resulting from a record number of attacks by West Bank settlers in the last few weeks. According to data presented to the participants, the number of incidents has increased by about 60%, with 416 attacks by Jews in the first half of this year alone. Invitations to the conference were sent to nongovernmental organizations and even to Palestinian victims of violence, who testified as to how they were injured.

Human rights groups presented at the conference a recent report that examined some 1,200 cases of violence from July 2012 until last July. The data was collected by the group Yesh Din, which also investigated the location of the events and their proximity to various settlements. It concluded that most cases of settler violence against Palestinians (63%) occurred near illegal outposts. Peace Now estimates that the total population of these outposts is less than 5% of all settlers, or 22,000 out of 450,000 people.

The most senior speaker at the event was the Meretz Party chairman, Health Minister Nitzan Horowitz. He warned that there are those on the right, including some members of the coalition, who are trying to detract from the severity of the phenomenon. “Some people in the Knesset minimize its existence or even deny it entirely. I invite them to visit the area, to meet with the victims of this violence, and to see the photos and video clips they produce,’’ he said. Horowitz did not stop there either. He also recommended the creation of some formal mechanism to compensate Palestinian victims of settler violence.

He then addressed the right-wing members of his own coalition: “The struggle against violence should lie well within the consensus. Knesset members and ministers from the right should be here with us too. Their silence and their failure to engage in this issue signals agreement with and encouragement of continued violence.”

Another senior speaker was Minister of Environmental Protection Tamar Zandberg, also of the Meretz Party. She spoke about tensions in the coalition over respect between the right and the left. “It is no secret that we entered the coalition fully aware that the occupation was not on its agenda. Nevertheless, that does not mean that we have to accept settler violence.”

It was inevitable that things would spin out of control when Knesset member Itamar Ben Gvir of the Otzma Yehudit (Jewish Power) party, the most right-wing member of Knesset, arrived at the event. He started shouting, “A man was killed yesterday and you are holding a conference on settler violence. Are you stupid?" He then asked for a moment of silence in Kay's memory.

Labor Party Knesset member Ibtisam Mara’ana, who helped organize the conference, responded: “Get out! Stop haggling with human lives. Stop trading in the lives and deaths of people.” Knesset member Mossi Raz of the Meretz Party, who also helped organize the conference, physically blocked Ben Gvir and said, “What we have here is live footage of settler violence.”

Ben Gvir was eventually removed from the room. By then, however, video clips of the provocation were already being spread across social networks.

The discussions that took place at the conference led to lively online debates between the right and the left long after the conference was over. This included a disturbing video featuring a well-known left-wing activist named Haim Shadmi.

“Give us the authority to bear arms. We will do the work for the Palestinians,” Shadmi said at the conference. “We will not harm anyone. If you are not capable of doing the work, we will protect human life, because you do not know how to do it.” Although the organizers stopped him from continuing, the damage was already done. He provided the settlers with a rhetorical weapon. They could now claim that they were the ones who were under attack.

Shadmi’s speech went viral on right-wing groups and pages across various social network platforms. It ended up embarrassing the organizers of the conference, who found themselves under attack for what looked like violence coming from them.