Palestinians clash with Israeli security after terrorist attack in Jerusalem

Expressing their support of the assailant who killed an Israeli and wounded four others in the alleys of Jerusalem’s Old City, residents of the East Jerusalem Shuafat refugee camp clashed with Israeli security forces. 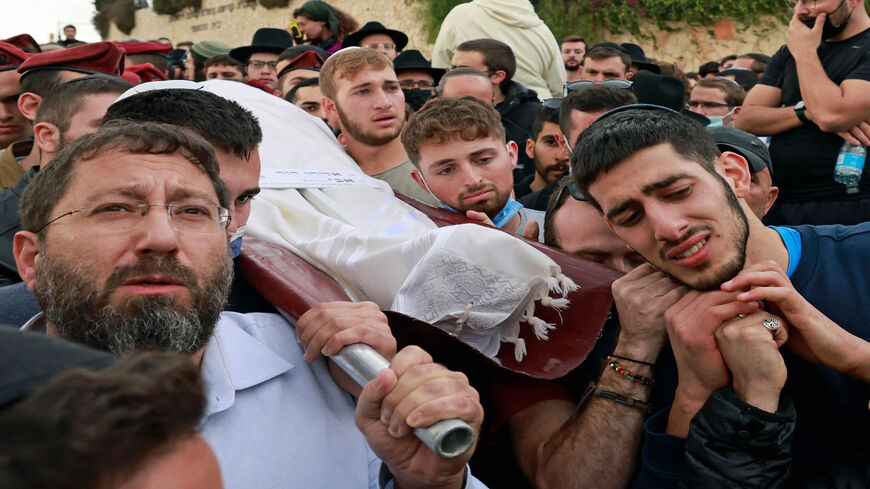 Mourners carry the body of Eliyahu David Kay during his funeral, a day after he was killed by a Palestinian gunman while on his way to the Western Wall in the Old City, Jerusalem, Nov. 22, 2021. - Menahem Kahana/AFP via Getty Images

Hundreds of Palestinians marched Nov. 21 through the East Jerusalem Shuafat refugee camp in support of Fadi Abu Shkhaydam, who shot and killed one Israeli national and wounded four other Israelis earlier in the day. After the shooting incident, Israeli security forces arrived to the camp, to arrest several family members of Abu Shkhaydam suspected of having assisted him. Suspicions reportedly rose after it became known that Abu Shkhaydam’s wife and some of his children left their home in Shuafat three days before the attack.

Reportedly, residents of Shuafat gathered in protest of the raid. The demonstrators set tires on fire and threw rocks at Border Police officers who arrived at the scene while praising in chants the military wing of Hamas. They also called for a general strike in Shuafat today.

The shooting incident took place on the morning of Nov. 21 in Jerusalem’s Old City. Abu Shkhaydam, known to Israeli security agencies as a Hamas member, fired with an automatic rifle several times at a group of Israeli civilians and Israeli police officers in the alleys of the Old City. One of the people targeted by Abu Shkhaydam was 26-year-old Eliyahu David Kay, a tour guide at the Western Wall Heritage Foundation who immigrated a couple of years ago from South Africa and who was engaged to get married. Abu Shkhaydam shot him multiple times, including a fatal shot to his head. Police officers at the scene shot at Abu Shkhaydam after he opened fired, and killed him.

Public Security Minister Omer Bar Lev said that the assailant “moved through the alleys and fired quite a bit. Luckily, the alley was mostly empty because otherwise — heaven forbid — there would have been more casualties. The entire incident lasted 32 or 36 seconds. The actions of the female officers were operationally at the highest possible level.”

Thousands of people attended Kay’s funeral this morning. One of the four people wounded is apparently hospitalized in Jerusalem in critical condition. Prime Minister Naftali Bennett tweeted yesterday, "The heart weeps over beloved Eliyahu David Kay, who was killed this morning by a heinous terrorist in Jerusalem. Eliyahu immigrated to Israel from South Africa, served as a paratrooper in the 202nd Battalion and for his livelihood worked as a tour guide at the Western Wall. He embodied the beautiful Israeli who is connected to his country and to his homeland."

The incident was a first of its kind in Jerusalem’s Old City since 2018, when a Jewish man — Adiel Kolman — was stabbed to death there. Kolman had worked at the time in the archaeological digs at the City of David site nearby.

Reports said that Abu Shkhaydam was an Islamic studies teacher and frequent visitor at Al-Aqsa Mosque. Other reports said he was preaching from time to time at the Temple Mount compound. A statement by Hamas praised Abu Shkhaydam for his act, saying, "The Holy City continues to fight against the foreign occupier, and will not surrender to the occupation."

Hamas has not claimed responsibility for the attack.

This morning, the French Foreign Ministry condemned the attack in the Old City of Jerusalem.