The individuals were part of a West Bank-based cell that was planning attacks on Israelis, according to the Israeli military. 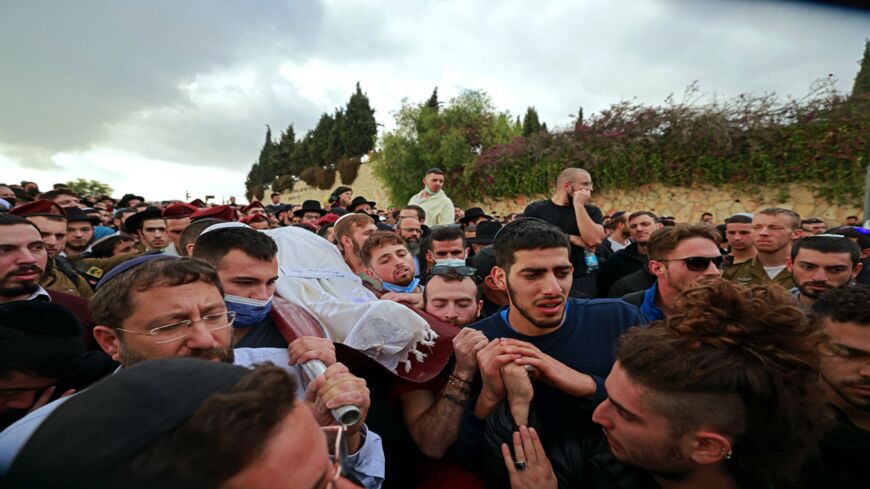 Mourners carry the body of 25-year-old Eliyahu Kay during his funeral in Jerusalem on Nov. 22, 2021, a day after he was killed by a Palestinian gunman while on his way to the Western Wall in the Old City. - MENAHEM KAHANA/AFP via Getty Images

Israeli security forces announced today the arrests of alleged Hamas members after a deadly stabbing of an Israeli man in Jerusalem.

The Israel Defense Forces (IDF) said today that the arrests took place over the past few months. The cell possessed an explosive belt, ammunition and other weapons, the IDF tweeted.

The announcement followed a deadly incident in Jerusalem yesterday when Hamas member Abu Shkhaydam fired a rifle into a crowd of Israeli civilians and police in Jerusalem’s Old City. His gunfire killed 26-year-old Eliyahu David Kay, a tour guide who had immigrated to Israel from South Africa. Police fatally shot Shkhaydam on the scene following the attack, according to Israeli authorities.

Following the shooting, hundreds of Palestinians in East Jerusalem’s Shuafat refugee camp marched in support of Shkhaydam. Some of them clashed with Israeli forces when the latter came to arrest members of Shkhaydam’s family in the camp.

The Hamas-affiliated news outlet Safa reported some arrests by Israeli forces in Jerusalem today, including a man in Shuafat. The outlet did not report any affiliations of the detained.