Israel calls on Ankara to close Hamas offices in Turkey

Following the killing in Jerusalem of Eliyahu Kay by a Hamas member linked to Turkey, and following the exposure of a West Bank Hamas cell led by the Hamas Turkey office, Jerusalem is calling on Ankara to shut down the group’s activities in the country. 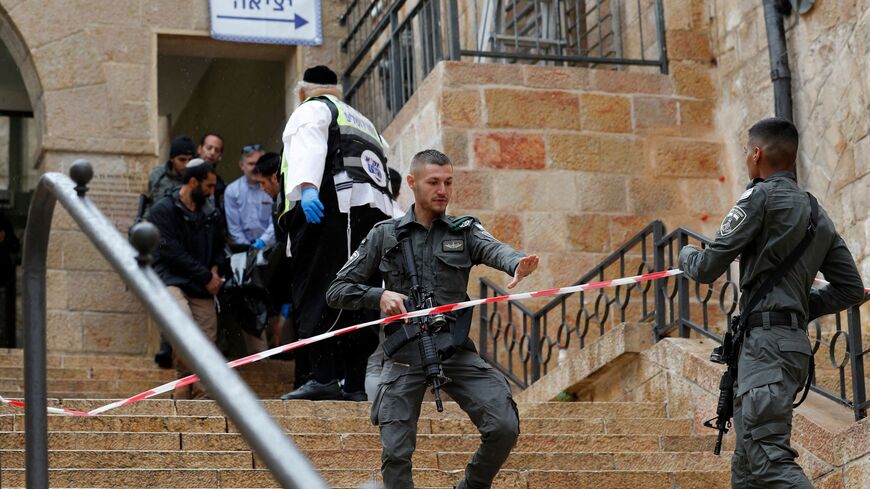 Israeli security forces clear the way for first responders at the scene of a shooting in the old city of Jerusalem on Nov. 21, 2021. One person died and three others were wounded. - AHMAD GHARABLI/AFP via Getty Images

Israel has intensified its diplomatic and security campaigns against Hamas, and is also calling on Turkey to shut down the group’s activities and offices in the country. These calls come after a Nov. 21 terror attack in Jerusalem’s Old City, perpetrated by a member of Hamas who had contacts with Hamas seniors in Turkey, and following the exposure of a large Hamas cell in the West Bank, also affiliated with operatives of the group in Istanbul.

Israel’s public broadcasting Kan channel reported after the attack in Jerusalem, in which 26-year-old Eliyahu David Kay was killed and four other Israelis wounded, that the gunman had traveled to Turkey several times in recent months. Security agencies said that during these trips the gunman, Fadi Abu Shkhaydam, met with senior Hamas officials, who guided his plans. Family members of Shkhaydam denied that, claiming he flew to Istanbul to meet with his son who studies in the country and to inspect real estate he owns there.

Shortly after the Jerusalem attack, on Nov. 22, the Shin Bet revealed that in recent weeks it had arrested over 50 members of a sophisticated Hamas cell in the West Bank.

The security agency said that the cell was in advanced stages of planning major terror attacks both in the West Bank and in Israel. The Shin Bet seized weapons, materials for at least four explosive belts for suicide attacks and an undisclosed amount of money. Israeli security officials said the cell was managed by Hamas politburo deputy Saleh al-Arouri, and by another senior Hamas member, Zacharia Najib. Both men live in Turkey, at least partly.

Israel has been calling for many years on Turkey to act against Arouri. After the news of the large Hamas cell in the West Bank, Foreign Minister Yair Lapid reiterated the Israeli demand, saying that Hamas’ offices in Istanbul must be shut down. He also called for the international community to designate Hamas in its entirety, not just its military wing, as a terror group, as did the United Kingdom last week. “Hamas’s offices in Istanbul must be closed. We need to prevent these criminal terrorist activities against Israeli citizens in every place and under all circumstances,” he said in a statement.

“It is not only Israel's duty to act against Hamas terrorism, it is the duty of the entire international community. The nations of the world must act as Britain did and outlaw Hamas. Hamas’ offices in Istanbul must close. We must prevent these criminal acts of terrorism against Israeli citizens anywhere and under any circumstances,” tweeted Lapid.

Some reports in Israel claimed the exposure of the Hamas cell was delayed, so as not to embarrass Turkish president Recep Tayyip Erdogan and not to harm diplomatic efforts last week for the release of Israelis Mordi and Natali Oknin. The couple was arrested in Istanbul Nov. 9 after taking photos of the presidential palace, and suspected of espionage. After eight days of detention, they were freed and flown home.

Prime Minister Naftali Bennett and President Isaac Herzog each spoke on the phone with Erdogan, hailing his contribution for the release of the Oknins. The release and the phone calls were regarded in Israel as signal of rapprochement between the two countries, after years of cold bilateral relations.