Turkish President Recep Tayyip Erdogan’s friendly chat with his Israeli counterpart Isaac Herzog could be signal that he is ready to turn a page in Turkey’s strained ties with Israel. 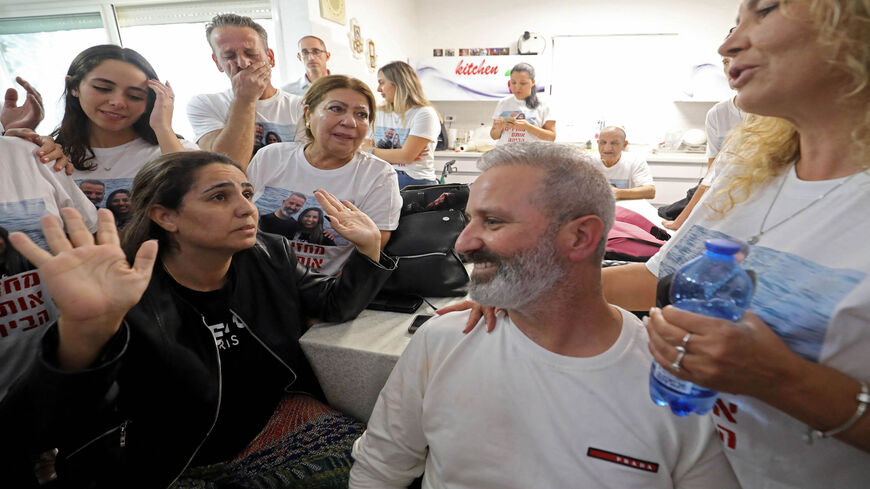 Israeli couple Natalie and Mordi Oknin, who were held in Turkey for a week on suspicion of espionage, are greeted upon their arrival home following their release, Modi'in, Israel, Nov. 18, 2021. - Gil Cohen-Magen/AFP via Getty Images

Natali and Mordi Oknin, detained by Turkish police Nov. 9 for photographing a presidential residence. in Istanbul, arrived back to Israel Nov. 18. But the road to their release and bringing them home was nothing short of a saga.

Senior Israeli Foreign Ministry officials spent several anxious hours on the night of Nov. 17-18. Although relieved that the Israeli couple had been released, they had no idea where the two had been taken. “We tried to get to them as fast as possible, but we failed,” a senior Israeli diplomatic source told Al-Monitor on condition of anonymity. “We were told they had been taken to a police station, but Istanbul has dozens of police stations.”

The Israeli diplomats found themselves racing around the city to different police stations trying to locate the Oknins, whose highly publicized detention had turned the husband-and-wife bus drivers on a visit to Turkey into instant folk heroes and freedom fighters back home.

With Israelis riveted by the story and the family’s teary interviews, what threatened to turn into a modern-day Dreyfus affair had a happy end. The two were found safe and sound, driven to the airport and flown on a private jet sent by the Israeli government to Ben-Gurion International Airport, where a euphoric, tearful welcome awaited them. The scene was reminiscent of previous returns home by Israelis imprisoned abroad.

The affair, which followed shortly after the Turks exposed what they called a "Mossad spy ring" operating in their country, threatened to derail the already brittle Ankara-Jerusalem relationship. Instead, the couple’s release appears to have hit the restart button for the relationship.

It all began when the two Egged bus company drivers from the central Israeli town of Modi’in traveled to Turkey to celebrate her birthday. They went up to the observation deck of the Istanbul Communications Tower, a popular tourist spot with its panoramic views over the city, snapping a photo of the president's residence visible in the distance. They then asked a waitress whether that was indeed President Recep Tayyip Erdogan’s residence, circled the building in the photo, and posted the snap on their family WhatsApp group to show the folks back home. Turkish police confronted them immediately, demanding to see the photo, setting off a saga that threatened to veer out of control when the prosecution announced it was going to charge the Israelis with “diplomatic and military” espionage.

Israel’s top three leaders quickly mobilized to handle the affair and contain its potential damage to relations with Turkey, tourism and trade between the two countries, and the image of Israel’s new government. Prime Minister Naftali Bennett worked closely with Foreign Minister Yair Lapid alongside President Isaac Herzog. The new head of Israel’s Mossad David Barnea was also thrown into the fray, immediately contacting his Turkish counterpart. The Foreign Ministry, meanwhile, contacted one of Erdogan’s closest aides. “Once we managed to get to Erdogan’s most intimate inner circle, we understood that the prospects of resolving this crisis quickly had improved,” a senior Israeli diplomatic source told Al-Monitor on condition of anonymity.

On July 12, shortly after Herzog was sworn in as Israel’s 11th president, he received a surprising phone call from Erdogan, who has made Israel his permanent personal punching bag over the past decade and more. The call between the two presidents lasted 45 minutes and was described as particularly friendly. Erdogan displayed warmth, optimism and spoke of the need to reinstate the two countries’ ambassadors and upgrade the level of cooperation between the two states. Although the Israeli president’s role is largely ceremonial, Erdogan was clearly putting out feelers to gauge prospects of returning into Jerusalem’s good graces — and perhaps into those of the United States, as well.

Herzog was keen. Turkey had been an Israeli ally until Erdogan came to power in 2003. In addition to his conversation with Erdogan, Herzog issued a series of public remarks about a new page in relations with Turkey. There was talk of a meeting between them in New York on the sidelines of the UN General Assembly meeting, which did not pan out, and of other initiatives. In Nicosia and Athens, officials watched this budding romance between their sworn enemy and relatively new ally with barely veiled suspicions, which they conveyed to their Israeli counterparts. These potential ramifications served to cool Herzog’s enthusiasm, and relations seemed to return to their cool normal — until the Oknins flew to Istanbul.

Following their detention, Lapid launched a flurry of intense diplomacy, under a full blackout. He knew that media attention would force Turkey onto a high horse from which it would be hard to come down. Bennett and Lapid decided to avoid mobilizing a third party, such as the United States, to avoid public statements and refrain from bad mouthing the Turks.

Furthermore, they decided to focus on the inroads they had made into Erdogan’s close circle. Barnea, meanwhile, sent his Turkish counterparts ample proof that the couple were simply ordinary tourists employed as bus drivers. A promotional clip featuring the Oknins, produced a few years ago by the bus company, was unearthed and posted on the internet. Bennett and Lapid, followed by Herzog, gave the Turks their word, through public and private channels, that the two were not spies. The point was to obtain their release before they were charged.

Israel insists there was no quid pro quo. “We made them realize that the continued saga would cause them and us grave damage. The key was to convince them that the couple were indeed tourists. The minute they understood that this was a misunderstanding and a coincidence with Kafkaesque potential, most of our work was done,” the diplomatic source said.

The incident also exposed fascinating aspects of domestic Turkish politics. At one of the discussions in Bennett’s office, the prime minister asked, Who is in charge, the interior minister responsible for the arrest, or President Erdogan? He was told that while the minister was managing the event, the Israelis would be freed should Erdogan decide to do so.

The answer was correct. Erdogan delivered the goods, displaying logic, flexibility and humaneness. Immediately after the Oknins landed, Herzog called Erdogan, followed by Bennett, whose office said it was the first call between Erdogan and an Israeli prime minister since 2013. They also thanked him publicly. It now remains to be seen how relations unfold. Will the crisis serve as a catalyst to recreate the relationship of old? Probably not. In the short term, a thaw can be expected and a return of the ambassadors recalled in 2018. In the medium and long-term, there is no knowing. With Erdogan facing elections in 2023, all bets are off.