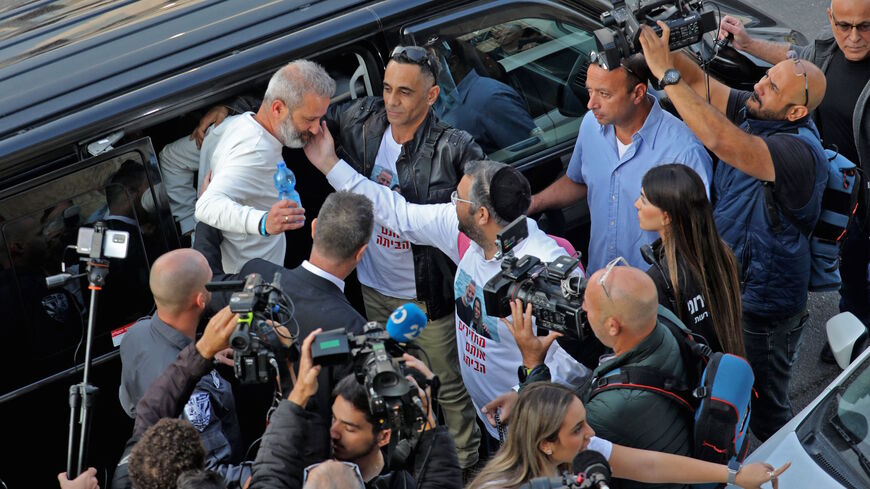 Israeli couple Mordi and Natalie Oknin, who were held in Turkey for a week on suspicion of espionage, are greeted upon their arrival home in the Israeli city of Modiin on Nov. 18, 2021, following their release. - GIL COHEN-MAGEN/AFP via Getty Images

Following the release of two Israeli tourists after a week in prison on spying charges, Turkish President Recep Tayyip Erdogan held a phone conversation with his Israeli counterpart Isaac Herzog where the two leaders underlined the mutual benefits of maintaining talks.

After the talks with Herzog, Erdogan also had a 15-minute phone conversation with Israeli Prime Minister Naftali Bennett, the first contact ever since Bennett became prime minister in June. Bennett called to thank Erdogan for his personal involvement in the return of the Israeli couple to Israel. No official statement was made on further content in Erdogan and Bennett's talks at the time of publication.

A short statement from the Turkish Presidency on the Erdogan-Herzog talks said that Erdogan stressed to Herzog, whose role is ceremonial, the significance of Turkey-Israel relations for the security and stability of the Middle East.

“Erdogan also said that differences of opinion [between the two] can be minimized if there is mutual understanding on both bilateral and regional issues,” the statement said.

The Israeli Presidency made its own statement, noting that the conversation was conducted in a positive spirit and Herzog thanked Erdogan for his involvement. He also “welcomed the desire for Turkey and Israel to hold a comprehensive dialogue on bilateral and regional issues related to regional peace.” The two leaders agreed to remain in contact.

The phone conversation, rare between the two countries with frayed relations, comes after  week-long tensions over two Israeli tourists, Mordi and Natali Oknin, who were arrested on spying charges on Nov. 9 for taking a photograph of Erdogan’s home in Istanbul. The couple, bus drivers in their forties, denied that they were spies. Finally released late Wednesday, they were put on a private Israeli government jet and flown home.

For Sinan Ulgen, the chairman of the Istanbul-based Centre for Economic and Foreign Policy Studies (EDAM) and a former diplomat, the release was no surprise. The arrest "bordered on the absurd,” he told Al-Monitor. “Their time in prison showed the rift within the state between the security apparatus and the diplomatic side.”

Only 36 hours before the court verdict that cleared them, Suleyman Soylu, Turkey’s harsh-toned Interior Minister, implied that the couple might not be freed any time soon.

“The initial assessment of the prosecutors is that they have committed military and political espionage,”  Soylu said at a press conference Tuesday. “We must let the courts do their work and decide in due process.” The Israeli side was concerned over the statement of Soylu but remained low-key in its reaction.

On Wednesday afternoon, a Turkish judge ruled that the couple, bus drivers in their forties, were innocent and did not commit any acts of espionage. They were transferred to the Israeli consulate in Istanbul and were later put on a plane to Israel.

Ulgen, as well as Soner Cagaptay, a fellow at the Washington Institute for Near East Policy and the author of  “A Sultan in Autumn,” said that the swift trial and release indicated Erdogan’s desire not to create an issue with Israel.

“We thank the president of Turkey and his government for their cooperation and look forward to welcoming the couple back home,” a joint statement from Bennett and Foreign Minister Yair Lapid said, adding that Herzog had also significantly contributed to efforts to end the incident.

Turkey and Israel maintained close political, defense and intelligence ties until 2010, when Israeli commandos killed ten Turkish activists on a ship that was attempting to breach the Isreali blockade of the Gaza Strip. From then on, ties steadily declined under Erdogan and Benjamin Netanyahu, the Likud Party leader who held the post of PM from 2009 to June 2021. A tentative effort of reconciliation in 2016 proved to be short-lived, as the two sides mutually pulled back their ambassadors following an escalated diplomatic dispute over Israeli forces killing 60 Palestinians in Gaza.

Over the past year,  Ankara expressed a desire to repair ties with Israel, and Erdogan called Herzog in July, to congratulate him on his new role.

“The swift release indicates the will of President Erdogan to continue, without backpedaling, with normalization of ties with Israel,” Ulgen said. “First, Ankara knows that the change of government in Israel provides a window of opportunity for Turkey. … Second, Turkish diplomacy is moving forward to improve ties with many Middle Eastern powers, such as the United Arab Emirates and Egypt. Thirdly, the two countries have found themselves supporting the same side, Azerbaijan, in the Azerbaijani-Armenian dispute over Nagorno-Karabakh.” Building on these ties, "we can inch toward sending back ambassadors,” he told Al-Monitor.

For Cagaptay, too, the swift release shows Turkish diplomacy’s desire to improve ties with Israel and nearby countries as it feels cornered in the region and the East Mediterranean. However, this may not happen as fast as Ankara desires, he warned. “Even if there was an improvement, it would be cold reset, rather than pre-2010 level warm ties,” he told Al-Monitor.

The last decade has reversed the two countries' situations, Cagaptay said. “In 2010, Turkey had good ties with the Arab world and Israel practically had no friends. Now, it is Turkey which is in an isolation, with few allies except Qatar and a handful of others. On the other hand, Israel, particularly after the Abraham Accords, has made friends in the region." Also, he said, it has developed good relations with Greece and Cyprus.

Moreover, said Cagaptay, Israel would only go for a reset if it thought it would be sustainable, rather than have the same diplomatic crises recur, as it has happened in 2018 over Israeli operations in Gaza. Ankara is critical of Israel’s treatment of Palestinians and repeatedly condemns its occupation of the West Bank. Israel, meanwhile, has accused Turkey of supporting the militant Palestinian group Hamas.