Israel seeks release of couple arrested for espionage in Istanbul

In an incident that threatens to further strain Turkey-Israel relations, Jerusalem is working to secure the release of an Israeli couple arrested in Istanbul Friday after reportedly taking photos of a presidential residence. 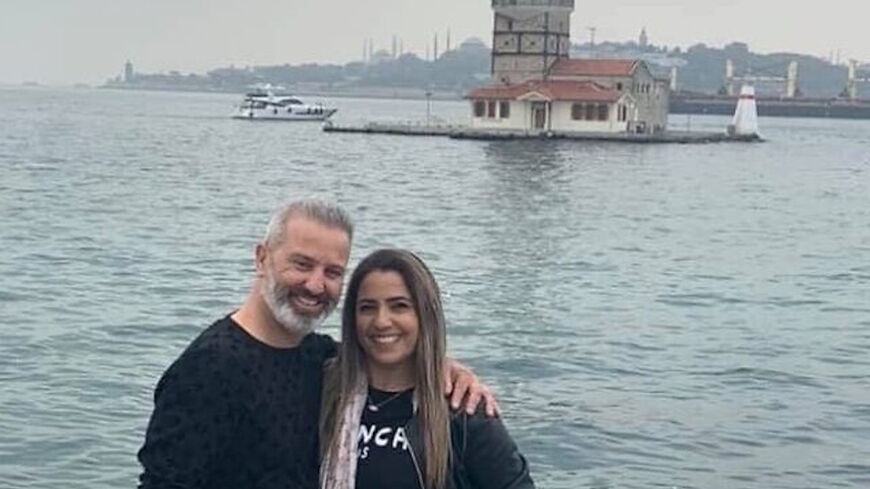 Mordy and Natali Oknin are seen in this undated photo. - Facebook

ISTANBUL — Seeking to avert a fresh diplomatic crisis in long-strained Turkey-Israel relations, officials in Jerusalem are working to secure the release of a couple arrested while vacationing in Istanbul, Turkey.

Two Israelis, Natalie and Mordi Oknin, and one Turkish national identified by the initials I.A. were arrested and charged with “political and military espionage” Friday after taking pictures of one of President Recep Tayyip Erdogan’s residences.

According to Turkey’s state-run Anadolu Agency, the three were snapping photos of the residence from a restaurant in the city’s 369-meter Camlica Tower when a staff member overheard their conversation and called the police.

Turkish media reports alleged the suspects were relaying information and sharing documents with an Israeli spy agency. Israeli officials have denied the claim, telling local media outlets the couple are both bus drivers and not spies.

The developments come after Turkish authorities arrested 15 people last month and charged them with spying for Israel’s Mossad intelligence agency and collecting information on university students in Turkey, some of whom are Palestinian.

“These are two innocent civilians who have been mistakenly caught up in a complex situation,” Bennett said Sunday. “I spoke yesterday with the family and we are doing everything to resolve the issue. I asked that the family stay strong despite the great difficulty.”

In a statement Monday, Israel’s Foreign Ministry announced it would send Rina Djerassi, the head of the ministry’s consular division, to Istanbul to support Israel’s diplomatic staff and “advance a number of consular issues.” The same day, Israeli diplomats were allowed to make a consular visit to the Oknins, according to The Times of Israel.

Gallia Lindenstrauss, a senior research fellow at the Institute for National Security Studies in Tel Aviv who specializes in Turkish foreign policy, said the arrests have received substantial media attention in Israel and are being presented as “unjustified and unprecedented” harassment of tourists.

On Sunday, Israeli Channel 13 news reporter Ali Mograbi was broadcasting live about the arrests from an Istanbul street when he was stopped by Turkish police and briefly questioned.

The events come as Ankara has increasingly sought rapprochement with several regional states with which its relations have been strained in recent years due to foreign policy disagreements.

Over the last year, Turkish officials have made reconciliatory efforts with counterparts in Saudi Arabia, Egypt and the United Arab Emirates, whose leader, Abu Dhabi Crown Prince Sheikh Mohammed bin Zayed al-Nahyan, is expected to meet with Erdogan next week.

Israel is among the nations with which Ankara has sought to warm ties in recent months. Ankara and Jerusalem both withdrew their ambassadors following the United States' 2017 recognition of Jerusalem as Israel’s capital, but have maintained strong bilateral trade.

In July, Erdogan made a rare congratulatory phone call to Israel's new President Isaac Herzog in which both leaders agreed to work toward improving frayed ties to enhance regional stability.

Yet the change of Israel’s government has not yet brought a change in Israel-Turkey relations, Lindenstrauss said, as improving ties with Turkey remains a low priority in the Bennett administration.

“While keeping lines of communication with Ankara open, [the Israeli government] is also suspicious as to how sincere Ankara is in its stated desire to improve relations with Israel,” Lindenstrauss told Al-Monitor. “The current affair only adds to the existing suspicion toward Turkey in Jerusalem.”

In the past, Ankara has criticized Israel’s treatment of Palestinians and repeatedly condemns its occupation of the West Bank. Israel, meanwhile, has accused Turkey of supporting the militant Palestinian group Hamas.

“If the couple is released soon, the event will still deter some Israelis from traveling to Turkey, but will not have a lasting effect,” Lindenstrauss told Al-Monitor.

She continued, “If, however, the Turkish side decides to press ahead with the espionage case, it will be a much more complicated situation for Jerusalem. It should be stressed, though, that currently, compared to Turkey, Israel is in a better place both politically and economically, so it is not clear what Ankara will truly gain from the situation deteriorating.”