Most of the elements Israel’s state budget were approved this morning after an all-night Knesset session. 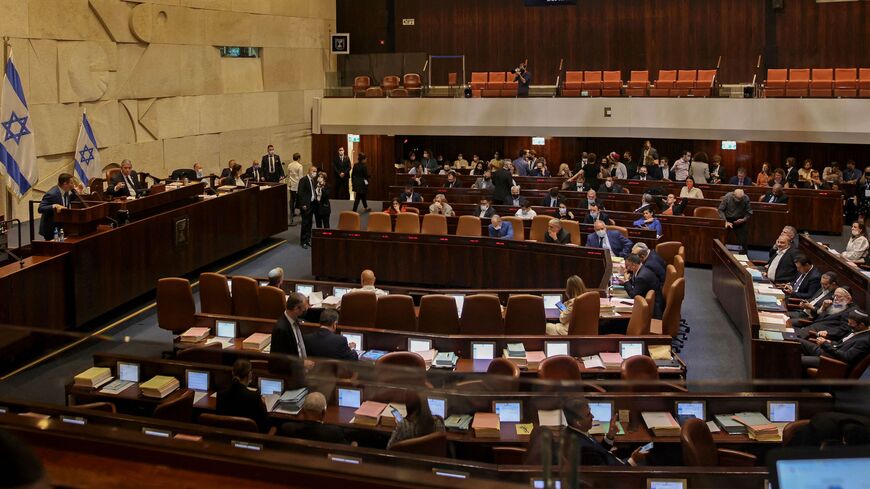 This picture shows a general view of a plenum session and vote on the state budget at the Knesset in Jerusalem Nov. 3, 2021. - AHMAD GHARABLI/AFP via Getty Images

Coalition leaders celebrated this morning, Nov. 4, after the Knesset approved most of the legislation proposals related to the 2021 state budget. A few remaining items are set for a vote at the Knesset this afternoon, essentially for the approval of the 2022 budget. The 2021-2022 budget as a whole is expected to be completely approved by tomorrow, before the beginning of the Sabbath. A majority of 61 Knesset members voted in favor for the 2021 budget, against 59 who objected.

Israeli law treats approval of the budget as a confidence vote in the government, so by passing the budget this week, the coalition has averted the threat of early elections. Failure to pass the budget would have meant the automatic dismissal of the Knesset and the fall of the government.

Israel had been governed without a budget for more than three years. The country had seen four rounds of elections during the political stalemate, blocking the government from passing a majority-backed budget. The 609 billion-shekel ($194 billion) spending plan for 2021 is the first budget passed by the Knesset since March 2018 and ends three and a half years of budgetary and political instability.

Prime Minister Naftali Bennett tweeted this morning that today is a “day of celebration for the State of Israel. After years of chaos we have created a government, overcame the Delta variant and now, thank God, we passed a budget for Israel! Continuing forward at full strength.” Foreign Minister Yair Lapid, who is also alternate prime minister, tweeted, “After a long night, we passed the 2021 budget in the Knesset. Now we have another long day ahead of us. Another budget for next year. We came to make a change!”

Other coalition members posted comments, photos and videos of a sleepless night of debates and voting. The Knesset's Yisrael Beitenu head Evgeny Sova posted a video with Labor's Emilie Moatti as she ate a bowl of soup.

The debate through the night was stormy, with associates of opposition head Benjamin Netanyahu repeatedly heckling and interrupting Bennett as he addressed the Knesset. At one point, Likud member David Amsalem was escorted out of the plenum after calling speaker Mickey Levy a "floor rag" and a "bully." After the approval this morning, the Knesset broke for a few hours of sleep before resuming this afternoon.

Moatti told the press, "The main achievement is first and foremost the very existence of the budget now, after a very long period that the state had to operate without one. Whenever doubts arise about [Labor] joining a right-wing government, when you see the alternative, you understand that we did the right thing."