Iraq's October elections may have strengthened the Iraqi Kurdistan administration's hands in the Yazidi enclave of Sinjar. 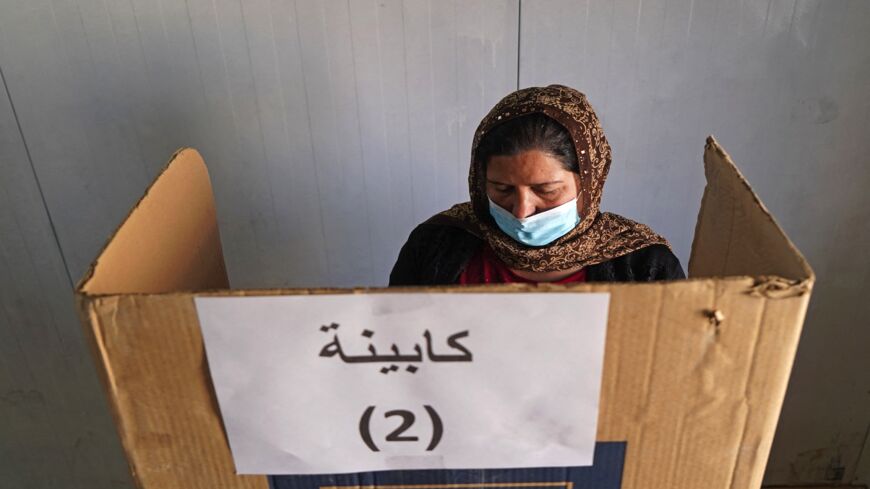 A displaced Yazidi casts her vote for the parliamentary elections at a camp some 15 kilometers from the northern city of Dohuk in the autonomous Iraqi Kurdistan region, on Oct. 8, 2021. Security forces, displaced people and prisoners cast ballots in the Iraqi legislative election two days before the rest of the country in a poll overshadowed by expectations of a low turnout. - ISMAEL ADNAN/AFP via Getty Images

DIYARBAKIR, Turkey — The ongoing power struggle between the Kurdistan Democratic Party (KDP, the main political group ruling Iraqi Kurdistan) and armed Kurdish militants from Turkey over the Iraqi Yazidi enclave, Sinjar, has extended to the Iraqi elections, with the vote resulting in a surprising debacle for the latter.

The KDP won all three seats in the town, defying Kurdistan Workers Party (PKK)-linked groups’ attempts to undercut the KDP’s campaigns in the run-up to the Oct. 10 elections. In some instances, KDP candidates were prevented from traveling to the region. While PKK-linked groups are now pushing for the cancellation of those results, analysts widely believe the militant group, which is on Turkey’s terror list, is short of sufficient support in the mountainous town that could turn the tables in its favor.

Sinjar — a focal point of the tensions between the PKK and the KDP since 2014 and one of the disputed areas between Erbil and the central Iraqi government — was under the de-facto control of Erbil until 2014 when peshmerga forces withdrew from the region on the face of the Islamic State’s (IS) swift territorial gains in northern Iraq.

The monthslong besiege by IS of the region, in which thousands of Yazidis were killed, ended mostly with the help of PKK-affiliated fighters who rushed to help the local population. Indignant at peshmerga forces who abandoned the area on the eve of the onslaught, Yazidis welcomed PKK militants that also helped form the region's local force, the Sinjar Resistance Units, and maintained their presence at the mountain after the defeat of IS.

Since then, the PKK presence in the area has turned into a point of contention between the Iraqi Kurdistan Regional Government (KRG) and the PKK. The militant group has refused to heed Erbil’s calls for their withdrawal. The town has been a strategic hold for the PKK because of its proximity to the Syrian border and its critical position that serves as a corridor between PKK bases in northern Iraq and PKK-affiliated Syrian Kurdish groups on the other side of the border. Baghdad and Erbil have reached a deal for the reconstruction of Sinjar, which also entails the removal of foreign fighters including the PKK from the region, but that deal has yet to be implemented.

Iraq's latest elections have rekindled yearslong tensions between the KDP and the PKK. Although more than a dozen candidates from different parties ran in Sinjar, the main competition was between KDP candidates and the PKK-backed Yazidi Freedom and Democracy Party (PADE). KDP candidates accused the PKK-linked groups of preventing them from campaigning in the region. The local Sinjar administration, which had close ties with the PKK, in turn, charged the KDP with “provocation.” The simmering tensions forced the KDP candidates to withdraw from the region on Oct. 2. Meanwhile, it’s worth mentioning that other candidates — regardless of their affiliations — freely campaigned in the run-up to the elections.

The outcome of the elections came as a shock to many. As the KDP won all three seats, PKK-backed candidates faced major debacles in an election whose outcome has had a paradigm-shifting effect on the outlook of the balance of power in the region.

According to Vahap Coskun, professor of law at Dicle University in Turkey’s predominantly Kurdish province of Diyarbakir and prominent commentator on regional politics, the KDP’s electoral victory has rebuffed the PKK’s assertions over the region by indicating that the militant group has little influence in Sinjar.

Pointing out that the KDP’s victory came despite intensified negative propaganda, Coskun said, “Despite this, the Sinjari people who went to the polls set their political preferences in favor of the KDP. Therefore, the PKK has no political weight there.”

According to Coskun, the PKK-linked groups’ negative propaganda against the KDP fueled a backlash and the outcome was a confirmation of Sinjar’s identity as an Iraqi Kurdistan region. Despite the PKK’s assertions, the results show that the people in the region still have trust in the KDP's legitimacy, Coskun argued.

Supporters of the PKK-linked groups, in turn, have argued that the Iraqi elections’ legitimacy was marred by a record low turnout. While confirming that the low turnout rate is “problematic” for Iraqi democracy, Coskun said it doesn’t change the political preferences of those who went to the polls, claiming that the PKK’s argument aimed to divert attention from the defeat. Coskun said election results have also strengthened Erbil’s hand vis-a-vis Baghdad in the Sinjar dispute.

Right after the elections, both the KDP and PKK-linked groups leveled mutual recriminations, accusing each other of preventing people in Sinjar from going to the polls. Yet it remains an open question how the PKK, known for its mobilization skills, was unable to mobilize its base in the region and get people to the polls.

Aydin Selcen, Turkey’s first consul general to Erbil, meanwhile, argues that the Iraqi elections could hardly be a comparison point between the KDP and the PKK, as the latter didn’t directly run in the polls.

“We know that the KDP-PKK ties are torn and that PKK leadership, for the first time this year, made a call to vote for the [Patriotic Union of Kurdistan],” Selcen told Al-Monitor, referring to the KDP's main political rival, the PUK.

Selcen affirmed that pressure on the militant group is increasing due to Turkey's KRG-backed ongoing military operations in northern Iraq, but, he added, “The PKK is not a formation that runs in the elections in the [Iraqi Kurdistan region]. While the KDP achieved a successful outcome in the elections, the turnout was very low. And it is clear that the people were extremely annoyed by both the KDP and the PUK.”

While pro-PKK media outlets are keeping the controversy surrounding the election results alive, PKK-backed PADE has appealed to the local election commission in Ninevah province to throw out election results in the town — a prospect that seems like a tall order.

The widespread opinion is that the election results have strengthened both Erbil's and Baghdad's hands to remove the PKK from Sinjar. Riding the momentum, KRG Prime Minister Masrour Barzani, speaking to Al-Monitor's Amberin Zaman at a forum in Erbil on Oct. 27, reiterated his call for the “immediate implementation” of the Sinjar deal.