"Death to America" was shouted by government loyalists, as the latest anniversary was held following state media reports about a "triumphant encounter" with US naval forces in the Sea of Oman. 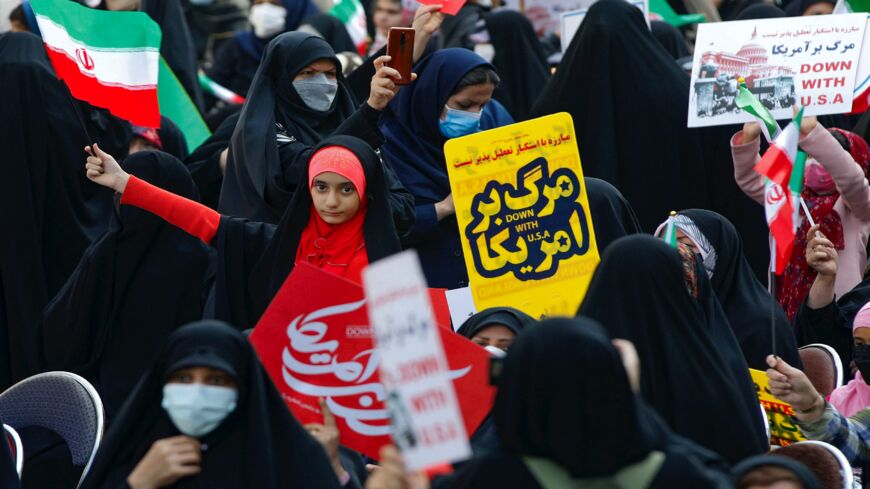 A young Iranian girl waving a national flag takes part in a rally outside the former US Embassy in the capital, Tehran, on Nov. 4, 2021, to mark the 42nd anniversary of the start of the Iran hostage crisis. More than 50 US Embassy staff were taken hostage in the seizure of its mission by supporters of the Islamic Revolution on Nov. 4, 1979. - AFP via Getty Images

A state-organized rally marking the 42nd anniversary of the takeover of the "den of espionage," a turning point in US-Iran relations that set off a decadeslong cycle of escalation between the two sides, took place Nov. 4 in an area outside the former US Embassy premises in Tehran.

The nationwide event was characterized by typical US flag-burning scenes and "Death to America" slogans on loudspeakers repeated by participants.

This year's "national day of the struggle against arrogance" was also themed on admiration for the Islamic Revolutionary Guard Corps (IRGC), which claimed only a day before to have "thwarted a US attempt to steal Iranian oil." The country's state TV released undated footage of the "anti-piracy" operation in which IRGC forces were shown in easy and full control of the vessel. Hours later, however, the narrative was brought under questioning by unnamed US officials. There was only an incident last week, they stated, in which two American destroyers were dispatched to "monitor" a Vietnamese-flagged tanker before it was confiscated by the IRGC and diverted into Iranian territorial waters.

While ambiguities persisted, Iran and the United States have not denied previous episodes at sea and in the Persian Gulf strategic oil pathway of Hormuz in particular. US forces even captured Iranian tankers destined for Venezuela as Iran's lifeline crude remains under severe American sanctions that were reinstated following Washington's departure from the Iran nuclear deal in 2018.

Indirect US-Iran talks over the revival of that accord were put on hold in June when hard-line President Ebrahim Raisi took office in Tehran. Months after sitting on the idea of how to return to the negotiating table, the Iranian government ultimately declared on Nov. 3 that a new date had been finalized for the resumption in the Austrian capital, Vienna. The announcement did not specify if the new round would include the United States. The other parties to the deal are China, Russia, the UK, France and Germany.

In his latest stance on the fate of the agreement, Raisi declared in a public speech on Thursday, "We will not walk away from the negotiating table, but [we] will resist excessive demands." He noted that his government will push for Iran's "legal right to have sanctions removed." Washington insists that for such removal, Tehran is required to roll back its nuclear enrichment to the 3.67% level as stipulated by the original accord.

Iran, on the other hand, has strictly demanded that Washington's reentry into the deal must come with a nondeparture guarantee.

And there were still signs from Tehran that prospects for a breakthrough were far from being visible on the immediate horizon. "The powerless US president is not willing to offer a guarantee," declared Ali Shamkhani, the secretary of Iran's Supreme National Security Council, a body of senior civil and military officials with a significant say in Iran's major foreign policy decisions.

Failure to do so, Shamkhani warned, will render future negotiations pointless, yielding no new outcome.