Iran's president says sanctions removal alone could initiate a Tehran-Washington dialogue, marking a departure from his earlier position where he strictly demanded the US rejoin the nuclear deal before any negotiation. 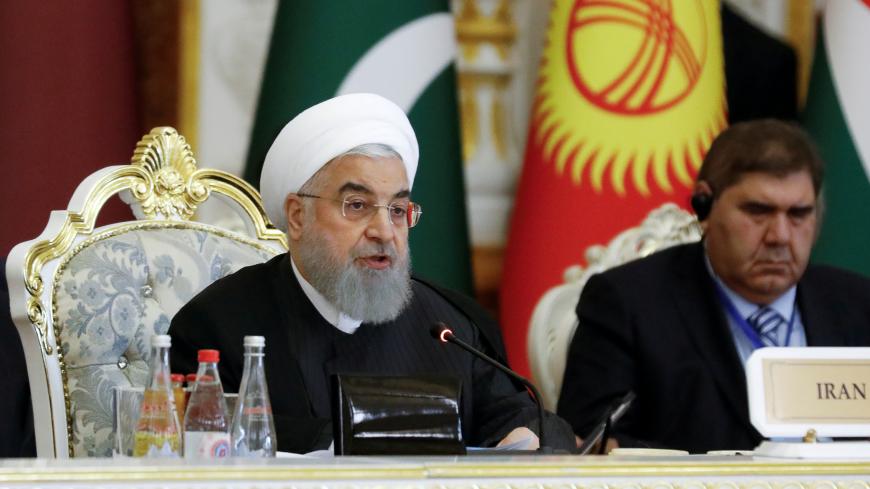 ​In a speech replete with both bellicose and conciliatory impulses, Iran's President Hassan Rouhani said the Islamic Republic favored talks with the US administration if the latter lifted all the sanctions it reimposed following its withdrawal in May 2018 from the Joint Comprehensive Plan of Action (JCPOA).

"Before everything else, they need to remove all of the sanctions regardless of whether they want to return to the deal or not, which is up to them," Rouhani told senior officials at the country's Foreign Ministry headquarters Aug. 6. The comment demonstrated an apparent shift from Rouhani's earlier adamant stance that pinned any potential rapprochement to the US reentry in the JCPOA. "What they are doing today is but economic terrorism," the Iranian president noted in reference to the sanctions, which Tehran has repeatedly lamented as a campaign targeting the livelihood of ordinary citizens.

Slamming the Rouhani administration for offering what they view as concessions in exchange for empty promises under the deal, Iran's hard-liners have persistently accused him of selling the accord to a reluctant Supreme Leader Ayatollah Ali Khamenei. In response to such criticism, Rouhani reaffirmed that the deal was the decision of the "establishment," suggesting that without Khamenei's consent it would have never been clinched. As for potential US-Iran talks, Rouhani threw the ball into the supreme leader's court again. "You [the US administration] are familiar with our constitution and understand that without his approval, we cannot proceed with any important move."

Back in 2013, Rouhani came under fire from opponents at home for a direct phone conversation with his US counterpart, Barak Obama, minutes before wrapping up a UN General Assembly visit to New York. "Had I not answered Obama's call, [the nuclear deal] would have been hard to reach," Rouhani said, noting in another message that direct talks with Donald Trump are not ruled out.

In recent months, the Trump administration has been pursuing an Iran policy largely understood as incoherent and confusing, characterized by twists and multiple zigzags. The White House has proposed unconditional talks while cutting off the conventional avenues for negotiations by blacklisting the Iranian leadership, including the supreme leader, and as recently as last week the country's foreign minister, Mohammad Javad Zarif, a US-educated diplomat who was Iran's top interlocutor in talks culminating in the nuclear deal.

After the JCPOA faced imminent collapse, Iran started breaching some of its commitments by exceeding the 300-kilogram cap on its low-enriched uranium and resuming enrichment beyond the 3.67% level. A third step has also been calibrated to be taken in around one month, according to the spokesman of Iran's Atomic Energy Organization, who warned that the scope of Iran's breaches will only further accelerate if the remaining European signatories fail to live up to their sides of the deal by providing Tehran with the promised economic relief.

US-Iran tensions have recently witnessed a new episode where American reinforcements in the Persian Gulf and multiple oil tanker incidents involving Iranian forces have raised the stakes of a possible military confrontation in the already volatile region. On that also, Rouhani sounded the alarm, noting that any conflict could go well beyond calculated dimensions. "A war with Iran will be the mother of all wars," he asserted.

To force Iran into negotiating a new deal, Washington has gone out of its way by exercising its "maximum pressure" policy aimed at zeroing out Iran's oil exports. This has opened up a separate battlefield, in which Iran is flexing muscles by using its control over the passage of oil in the strategic Strait of Hormuz as a pressure tool.

"Security for security and a strait for a strait. It cannot work this way that Hormuz is open for you, while Gibraltar is closed to us," Rouhani said of the ongoing oil tanker impasse between Iran and the United Kingdom, which has seen each impound an oil tanker from the other's side. "We are powerful, and when we say something, we put it into action," Rouhani declared in reference to the Iranian capture July 18 of the UK oil tanker Stena Impero. He boasted about how Iranian commandoes rappelled onto the vessel from a chopper right under the nose of the UK warship HMS Montrose, which he said acted as but a mere "bystander" in the entire incident.