The British navy is now escorting vessels through the Strait of Hormuz for safety reasons, as it remains to be seen if Iran and the United Kingdom can settle their maritime dispute. 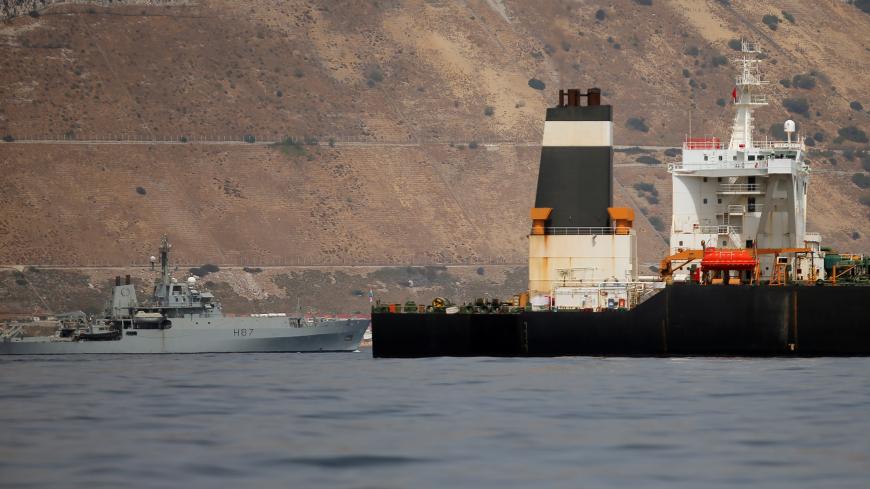 A British Royal Navy patrol vessel guards the Iranian oil tanker Grace 1 as it sits anchored after it was seized earlier this month by British Royal Marines off the coast of British Mediterranean territory on suspicion of violating sanctions against Syria, Strait of Gibraltar, southern Spain, July 20, 2019. - REUTERS/Jon Nazca

Two tankers stranded in two straits almost 4,000 miles apart are threatening to sink the already-adrift relationship between Britain and Iran.

When it comes to Iran, Britain is the old fox who’s always desperate to exploit Persia.

Britain’s decision to back authorities in Gibraltar as they seized control July 4 of Iranian oil supertanker Grace 1 was seen in Tehran as a pretext for escalation that could facilitate Britain’s exit from the Iran nuclear deal and join forces with the United States in pressuring Iran.

This was clear in Iranian Foreign Minister Mohammad Javad Zarif’s first tweet after Britain elected Prime Minister Boris Johnson on July 23. Zarif wrote about outgoing Prime Minister Theresa May’s seizure of the tanker at the “behest of [the] US,” calling it “piracy, pure and simple.”

“I congratulate my former counterpart Boris Johnson on becoming UK PM. Iran does not seek confrontation, but we have 1,500 miles of Persian Gulf coastline. These are our waters and we will protect them,” he wrote.

Two days before, Zarif had leveled an accusation on Twitter against US national security adviser John Bolton: “Having failed to lure @realDonaldTrump into War of the Century, and fearing collapse of his #B_Team, @AmbJohnBolton is turning his venom against the UK in hopes of dragging it into a quagmire. Only prudence and foresight can thwart such ploys.”

After Britain seized the Iranian tanker, Bolton had tweeted his full support. “Excellent news: UK has detained the supertanker Grace I laden with Iranian oil bound for Syria in violation of EU sanctions. America and our allies will continue to prevent regimes in Tehran and Damascus from profiting off this illicit trade.”

Iranian officials warned they would retaliate. The most serious threat was from Supreme Leader Ayatollah Ali Khamenei on July 16, who said, “The vicious British government committed piracy and attacked our ship; they commit crimes and legalize it. The Islamic Republic and the believing members of the establishment will not leave such vicious acts without a response.”

A recording emerged of radio exchanges between the HMS Montrose and Iranian armed forces vessels moments before the tanker was seized.

The Iranian vessel can be heard telling the British frigate it wants to inspect the Stena Impero for security reasons, which contradicts the Iranian official stance that claimed the tanker was seized after it collided with a fishing boat and failed to respond to calls from the smaller craft.

To Iran, the decision was part of the tit-for-tat strategy in place since tension mounted with the United States after Washington labeled the IRGC as a terrorist organization in April. The Iranians retaliated by designating the US Central Command a terrorist group. On May 8, President Hassan Rouhani announced Iran was beginning steps to stop complying with parts of the nuclear deal.

“There is an assessment in Tehran that the seizure of the tanker by the UK has been partly in line with appeasement toward anti-Iran elements in the administration” of US President Donald Trump," said Iranian researcher Abas Aslani in an interview with Al-Monitor.

In Tehran, the main concern is that pressure on Iran is being exerted in different ways, in addition to the sanctions — like seizing tankers. It is debatable whether the primary sanctions are succeeding to the extent Trump desires — but when they are combined with other tools, the sanctions become more effective. In Trump’s world, anything short of war that can pressure Iran will be used.

Aslani and many others in Tehran believe the tanker crisis is going to undermine European efforts to facilitate trade with Iran, mainly through the Instrument in Support of Trade Exchanges (Instex), and could also be seen by some as justifying the zero-oil export policy of the American administration against Iran.

Aslani added, “The seizure of Iranian tankers — even in limited and few numbers — will intimidate foreign shipping companies from working with Iran.”

As for the United Kingdom — one of the five parties still in the nuclear deal after the US exit — keeping the deal alive has been a priority. The United Kingdom worked along with Germany and France to lay the basis of Instex, which is designed to facilitate transactions in currencies other than the US dollar.

Prior to Johnson’s election, he made it clear he will not support military action against Iran. He still stresses “diplomacy must be the best way forward,” though he has described Tehran’s government as “disruptive, dangerous [and] difficult.” Johnson, who has a reputation for political duplicity, could become someone else by the time he gets his luggage to Downing Street. Therefore, it is important to look closely into what he might do, and whether Iran’s caution toward London is justified.

“I think it's right to be wary of how a Boris Johnson-led government might lead to a shift in the UK’s stance toward Iran,” Edward Wastnidge, who lectures on international studies and politics at the British Open University, told Al-Monitor.

He said Johnson, known to be a committed Atlanticist who promotes a strong relationship between Western Europe and the United States, might well pursue a policy that is closer to the United States on Iran, though he has maintained that he supports the nuclear deal.

“The concern is that, in a rush to appease America, Johnson may be less supportive of European-led efforts to circumvent US sanctions against Iran. … In doing so, he could undermine efforts to engage constructively with Iran,” Wastnidge said. “A Johnson premiership, particularly in light of Brexit, will likely see the UK adopting an even more transactional approach — which will only serve the interests of its Middle Eastern allies such as Saudi Arabia and the United Arab Emirates.”

However, UK Ambassador to Tehran Rob Macaire stated in a rare interview with the Iranian press that the United Kingdom has “officially and explicitly announced that we do not support America's policy of maximum pressure against Iran.”

“Our aim is to reduce tension in the region,” he recently told Reformist Iranian newspaper Etemad. Referring to UK and French agreements to launch a system to make shipping in the Persian Gulf safer, he said, “We believe that such a measure can help alleviate tension in the region, because we can only avoid incidents that may cause serious tension if the traffic of vessels in the Strait of Hormuz takes place securely.”