US praises Bahrain for its help with Afghanistan evacuation

Many Gulf states have made Afghanistan a focus of their foreign policies following the Taliban takeover of the country. 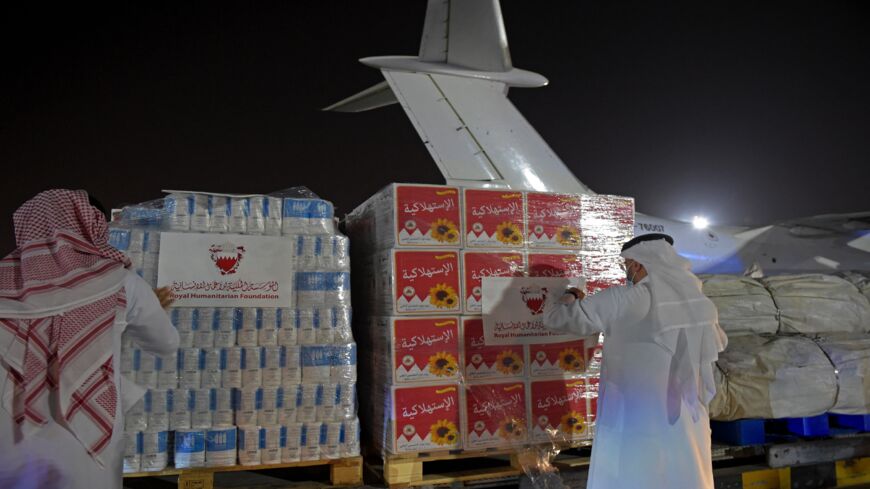 Volunteers label a shipment of humanitarian aid to be sent to Afghanistan at Bahrain International Airport on Muharraq Island, near the capital, Manama, on Sept. 4, 2021. - MAZEN MAHDI/AFP via Getty Images

Bahrain’s Interior Minister General Shaikh Rashid bin Abdullah Al Khalifa received a letter from the US Department of Homeland Security “expressing thanks and appreciation of the efforts of the Kingdom of Bahrain in facilitating the evacuation of Afghans,” the official Bahrain News Agency reported.

In August, the Bahraini government allowed evacuation flights from Afghanistan to land at its airport. The United States, the United Kingdom and numerous other countries evacuated their citizens, local employees and other Afghans seeking repatriation due to the Taliban takeover of the country that month. Bahrain’s fellow Gulf state Qatar also played a large role in facilitating these evacuation and repatriation efforts in August and September.

Several Gulf states have taken an interest in Afghanistan since the Taliban resumed control of the country. The Taliban, which is a radical Islamist group, regained most of the country amid the US military withdrawal this year. The group previously ruled Afghanistan from 1996-2001, during which only Saudi Arabia, the United Arab Emirates and Pakistan recognized them.

Saudi Arabia, the UAE and Qatar all called for calm after the Taliban victory. Qatar then publicly encouraged the Taliban to respect women’s rights. The UAE offered exiled Afghan President Ashraf Ghani asylum after his government fled. The Emirati government also held a meeting with the military of Afghanistan’s neighbor Pakistan and sent humanitarian aid to the Afghan capital, Kabul.

Bahrain is a major ally of the United States. The country is also close with US allies Israel and Saudi Arabia.

The US Department of Security did not immediately respond to Al-Monitor’s request for comment on the letter to Bahrain’s Interior Ministry.