Saudi Arabia and the United Arab Emirates were two of the only three countries to recognize the Taliban the last time the Islamist group ruled Afghanistan. 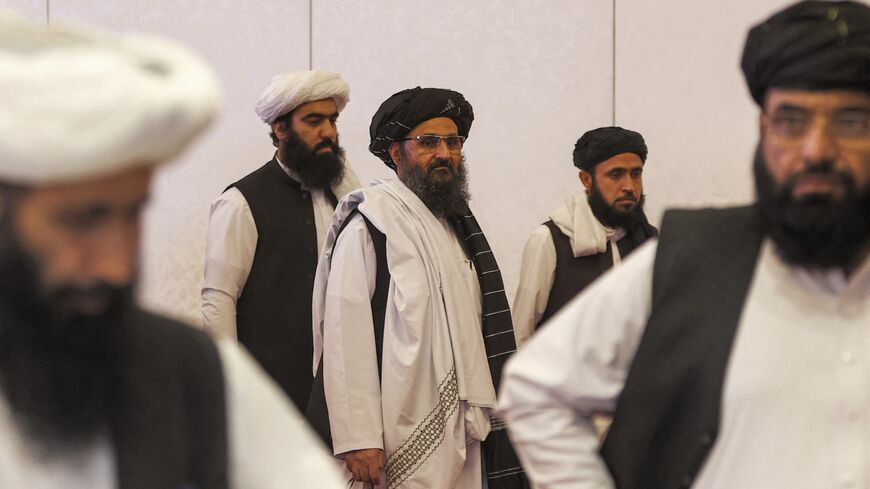 Mullah Abdul Ghani Baradar (C), the leader of the Taliban negotiating team, walks after the final declaration of failed peace talks between the Afghan government and the Taliban in Qatar's capital, Doha, on July 18, 2021. After the Taliban took control over Afghanistan, Baradar met on Aug. 17, 2021, in Doha with Qatari Foreign Minister Mohammed bin Abdulrahman Al Thani. Baradar, a co-founder of the Taliban, then flew to Kandahar, Afghanistan. - KARIM JAAFAR/AFP via Getty Images

Gulf states are calling for peace and dialogue in Afghanistan after the Taliban seized control of the capital, Kabul, amid the US military withdrawal.

Qatari Foreign Minister Mohammed bin Abdulrahman Al Thani met with a Taliban delegation in Doha on Tuesday led by Mullah Abdul Ghani Baradar. Thani called for "protection of civilians," “national reconciliation” and a “peaceful transfer of power" during the meeting, according to a Qatari Foreign Ministry statement.  Baradar, a co-founder of the Taliban, then flew to Kandahar, Afghanistan, for his public visit to the country in two decades.

The United Arab Emirates Foreign Ministry expressed “hope that Afghan parties will exert all efforts to achieve security, stability and development in Afghanistan,” referring to the country as “brotherly Afghanistan” in a Tuesday statement.

On Monday, the Bahraini Council of Ministers called for consultations with Gulf Cooperation Council (GCC) states on developments in Afghanistan, according to local media outlets. Bahrain currently chairs the GCC.

The Taliban captured the Afghan capital, Kabul, on Sunday as the US military was nearing the completion of its ongoing withdrawal from the country. US intelligence previously predicted it could take months for the Taliban to take Kabul, and the swift Taliban victory appeared to catch the Biden administration off guard.

The Taliban, which refers to itself as the Islamic Emirate of Afghanistan, governed the country from 1996 until 2001, when a US-led invasion topped the group following the Sept. 11 attacks.

The Gulf has a history of relations with the Taliban. Saudi Arabia and the UAE, along with Pakistan, were the only countries in the world to recognize the Taliban when they last ruled Afghanistan.

It is unclear how Saudi Arabia and the UAE, who are both US allies, will respond to the Taliban’s consolidation of power across Afghanistan.

For its part, Qatar hosted talks between the Taliban and the US-backed Afghan government that began last year. The government has since collapsed.

The Taliban, which is known for its brutal and strict zealous rule, has some sympathizers in the Gulf. Oman’s Grand Imam Ahmed bin Hamad al-Khalili congratulated the Afghan people on Monday for their “dear victory against the aggressive invaders,” referring to the Taliban victory over the US-led military coalition.