Saudi Arabia’s plan for “net-zero”; Turkey’s spy busts; Syria’s rebel factions; Egypt’s robot detention; fatwas on marital sex and bodybuilding; fishing for plastic in the Nile … all in about 1,500 words! 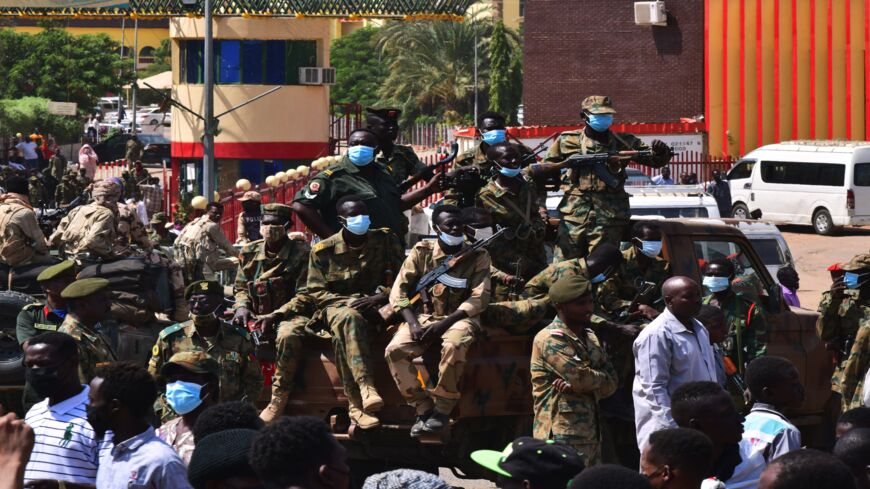 Sudanese security forces keep watch as they protect a military hospital and government offices during protests against a military coup overthrowing the transition to civilian rule on Oct. 25, 2021, in the capital's twin city of Omdurman. Sudan's top general declared a state of emergency and dissolved the authorities leading the country's democratic transition today after soldiers detained civilian leaders in what the UN condemned as a "coup." - AFP via Getty Images

The Biden administration had hoped Sudan, a pivotal country of 44 million in the Horn of Africa, was on a steady if bumpy road to elections and economic reform. That’s all in jeopardy now after the military ousted civilian leaders in a coup on Oct. 25. The US State Department has put the junta on notice that the recent turnaround in relations, as well as economic assistance, is in jeopardy unless and until civilian rule is restored.

Military rejects "coup" accusation. Lt. Gen. Abdel Fattah Burhan, the head of Sudan’s armed forces, said that although the civilian-led transitional government had been dissolved, national elections would proceed as planned in July 2023 and a new prime minister and technocratic government will be appointed to replace Abdalla Hamdok, who was ousted and placed under house arrest. Burhan claimed that the military actions did not constitute a coup but were a necessary step to avoid civil conflict. “The dangers we witnessed last week could have led the country into civil war,” he said, seemingly alleging that demonstrations over the past week may have been engineered for overthrow. Clashes between security forces and protesters have so far led to eight dead and 154 wounded.

For more background and the warning signs leading up to the military takeover, see last week’s Week in Review column here.

US turns up pressure. The Biden administration is making aid to Sudan contingent on adherence to both the Sudan Constitutional Declaration (August 2019) and the Juba Peace Agreement (October 2020), which laid out the country’s planned transition to civilian rule. Since the military stepped in, Washington has suspended $700 million in economic assistance and the World Bank has paused all disbursements to Sudan. US Secretary of State Antony Blinken has been working the phones to rally US partners with influence in Sudan — including the Democratic Republic of Congo (which holds the presidency of the African Union) and Saudi Arabia — to help get Sudan’s transition back on track. US Horn of Africa Envoy Jeffrey Feltman was in Sudan days before the coup.

"Breakthrough" at risk. Back in March, World Bank President David Malpass heralded the prospect of Sudan receiving debt relief under the Heavily Indebted Poor Countries (HIPC) Initiative as a “breakthrough.” Absent US and international assistance, Sudan’s economy could crack, at increased risk from “medium-intensity conflict” in the World Bank matrix of economies affected by fragility and conflict.

As we reported in April, Sudan is primarily an agricultural economy and thus especially sensitive to climate variations and flooding. Extreme poverty (defined as per capita income below $1.90 per day) is high at 13.5% of the population; the lower-to-middle-income poverty benchmark of $3.20 a day would encompass 46.1% of Sudan’s population. Sudan ranks near the bottom on the Human Development and Human Capital Indices. The economy, especially hard hit by COVID-19, shrank by 3.6% in 2020, the third straight year of contraction. The IMF had projected Sudan’s economy would grow this year by 0.9%, before accelerating to 3.5% in 2022 and 6.5% in 2023. These hopeful projections are now in jeopardy because of the economic consequences of the uncertain political transition.

What we’re watching. US turns to partners play key role. The risk of instability and economic collapse in Sudan is also a regional crisis. The Tigray conflict in neighboring Ethiopia, alongside the regional tension over the Grand Ethiopian Renaissance Dam (GERD), has put Khartoum and Addis Ababa at odds. The United States will therefore be banking on the counsel and good offices of partners in the Middle East and Africa. In addition to Congo and Saudi Arabia, Sudan’s powerful neighbor, Egypt, will play a pivotal role, given its close security and diplomatic coordination with Sudan. And the United Arab Emirates has pursued quiet and impactful diplomacy in the region, unique in its close ties with Sudan, Egypt, Ethiopia and Eritrea.

Saudi Arabia has pledged to eliminate or offset its greenhouse gas emissions by 2060, an enormous undertaking for one of the world’s top oil producers.

But as Jim Krane and Karen Young argue, the payoff would be huge. “A serious commitment to decarbonization would revitalize the kingdom’s influence, giving it credibility required to shape the energy transition in ways that could ensure long-term roles for hydrocarbons,” they write.

To hit its net-zero carbon emissions target, Saudi Arabia will need to upend the way it generates electricity and build a network of solar power plants. It’s an ambitious goal, but as Krane and Young note, the Gulf monarchy has some surprising advantages.

2. The timing of Turkey’s spy busts

Turkey revealed last week that it had broken up a 15-person Arab spy network accused of surveilling Turkey-based Palestinians on behalf of Israel’s Mossad intelligence agency. Turkey’s National Intelligence Organization (MIT) monitored the alleged spies for a year before detaining them in four Turkish provinces on Oct. 7.

“At first glance, the bust might appear as a trump card for Turkey to squeeze Israel," Fehim Tastekin writes. “Yet the revelations do not implicate any Mossad operatives and remain limited to Arabs, which leaves Israel room to deny involvement and wash its hands of the affair.” For its part, Israel has appeared unbothered by the reports.

The timing of the latest spy bust is worth noting. News of the Mossad ring followed similar reports that Turkey has rounded up groups of Iranian and Russian spies.

-Tel Rifaat: Syrian government forces and their affiliated militias are deploying military reinforcements in the town of Tel Rifaat ahead of a potential military offensive launched by the Turkish army and its proxies against Kurdish-led forces. A spokesperson for the Turkey-backed Syrian National Army (SNA) told Khaled al-Khateb, “The regime's buildup will not undermine our resolve … our forces will be ready to do what must be done to liberate these areas from the hostile forces.”

-Idlib: Sultan al-Kanj reports how a merger involving some of the Turkey-backed factions could derail Hayat Tahrir al-Sham’s efforts to form an alliance with the SNA-affiliated Al-Jabha al-Shamiya.

-Aleppo: Khaled al-Khateb reports here about how the SNA has stepped up operations against drug trafficking networks around Aleppo.

In what is surely a first, Egyptian security forces detained a robot suspected of possible espionage. The British-made bot, Ai-Da, is considered the world's first humanoid artist that uses artificial intelligence to paint. The robot had traveled to Egypt along with its creator, Aidan Meller, to hold its first exhibition at the base of the pyramids in Cairo.

Meller, who was also detained at customs for 10 days, said the border security officers holding them grew suspicious of Ai-Da’s modems and eyes, which can function as cameras. Ai-Da’s creator told The Guardian, "I can ditch the modems, but I can't really gouge her eyes out." The Egyptian government has not responded to press inquiries about the detention. Eventually, Meller and his robot were released after intervention by the British Embassy.

An Egyptian preacher has issued a controversial fatwa barring men from participation in bodybuilding competitions that reveal what Sharia has defined as intimate parts of their bodies. The announcement came in response to Egyptian bodybuilder Mamdouh "Big Ramy" Elssbiay’s win at a championship in Orlando, Florida, earlier this month. A professor at Egypt’s Al-Azhar University rejected the recent fatwa, telling Ibrahim Ayyad that the Sharia rule on showing skin applies only to worship.

Meanwhile, an unofficial religious fatwa that prescribed the number of times a married couple should have sex has gone viral online. After a sheikh offered his judgment on Facebook, the official Egyptian Dar al-Ifta was forced to clarify that marital intimacy must be consensual.

What We’re Watching: Fishing for plastic in the Nile River

Some 2,000 fishermen in Egypt have joined forces to collect 100,000 kilograms of plastic waste from the Nile River. The country’s storied river is heavily polluted by wastewater, agricultural runoff, industrial waste and trash that is thrown directly into the water. The pollution is having a serious impact on the river’s biodiversity, as well as on fishing and human health. "People have to understand that the Nile is as important — if not more — than the pyramids," one of the cleanup organizers said. "The generations coming after us will depend on it." Check out the video here.

What We’re Listening To: Will Biden-Erdogan meeting slow slide in US-Turkey ties?

US President Joe Biden is expected to meet with Turkish President Recep Tayyip Erdogan on the sidelines of the UN Climate Summit in Glasgow starting on Oct. 31. For the best brief on the state of US-Turkey relations in advance of the meeting, Amberin Zaman and veteran Turkey analyst Alan Makovsky discuss whether the S-400 issue could cause the final rupture between Ankara and the NATO alliance. You can listen to the interview here.