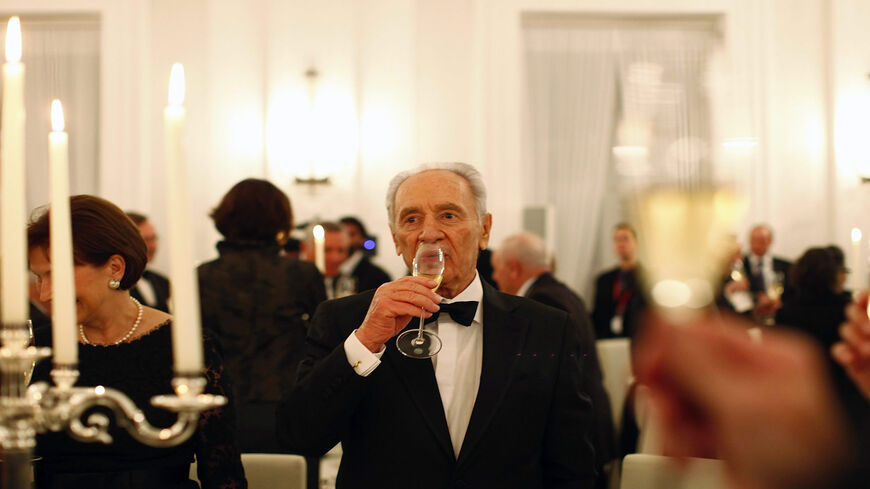 The global Me Too movement came into the world in 2017, not long after former Israeli President Shimon Peres left it. Five years after the death of this statesman and Nobel Peace Prize laureate at the age of 93, the continuously spreading shockwaves generated by the movement crashed into his memory. In recent days, Peres’ name has become the focus of a Me Too scandal resonating throughout Israel, with reactions corresponding to political inclinations: Right-wing supporters attacking Peres and his legacy like prospectors chancing upon a nugget of gold, while most of those on the left, including Peres fans, are hanging their heads in an embarrassed silence.

Some reports emerging in recent days link Peres, one of the best-known Israelis on the world stage, with behavior that could be construed as sexual harassment. Allegations of sexual impropriety are carving deep cracks in the Peres legacy, which dates back to the birth of the state and spans the establishment of Israel’s nuclear reactor in Dimona, constant efforts to fortify Israel’s power in a hostile environment, the pullout from Lebanon, the eradication of triple-digit inflation, the Oslo agreements and the peace process with the Palestinians. This cloud will not dissipate so easily.

Peres was the last of a generation of giants, the final survival of the founding fathers of the modern Israeli state. He served as prime minister three times — briefly after Yitzhak Rabin’s 1974 resignation, for two years in the 1980s, and following Rabin’s 1995 assassination — and as foreign minister three times, generating both great admiration and harsh criticism. In his twilight years, he achieved the warm public embrace that had always eluded him, earning broad consensus as Israel’s ninth president. Throughout his lengthy political career, Peres was the subject of condemnation by many on the political right, but with his election as president he managed to distance himself from division, turn against part of his legacy and become the national darling of the political right and left as one.

By the time he died, Peres had become one of the most liked and accepted public figures in Israel and one of the most recognized Israeli leaders abroad, second only, perhaps, to the man who defeated him in the 1996 elections, former Prime Minister Benjamin Netanyahu. His 80th and 90th birthday celebrations drew prime ministers, nobility and celebrities from around the world.

This illustrious career is now under fire. In the public eye for so many decades, Peres’ name was linked invariably with many political scandals, but never with accusations of sexual misconduct. Colette Avital, a respected veteran diplomat and former Labor Knesset member closely associated politically and professionally with Peres over the years, was the one who let the genie out of the bottle in an interview she gave Haaretz, published Oct. 7, to mark the publication of her autobiography. In response to the interviewer’s question, Avital denied the many rumors regarding an affair she was reputed to have had with her late boss and patron, instead describing an incident in which he pushed her up against a wall and tried to kiss her against her will, forcing her to flee the room. “My legs shook,” she said, adding that he had harassed her one other time.

Avital, a respected diplomat whose many foreign assignments included ambassador to Portugal and consul general in New York, was considered a Peres confidante for years. Her revelations prompted attacks by others among his close associates, who wondered aloud why she had kept silent all those years and why she had decided to speak out after his death. Some alleged that she had done so to promote her book. But she was not to be deterred, answering her critics that since she had been asked a direct question about her personal relationship with Peres, she had not wanted to lie.

Her testimony set off a storm and prompted two other women to come forward — one of them told her tale to Channel 12 television host and journalist Rina Mazliah — with similar accusations, although neither agreed to be identified. Within days, Peres’ illustrious public career spanning seven decades has been ground into dust. The right wing made mincemeat of what was left of his reputation, while the left hunkered down in embarrassment. Labor leader and Transportation Minister Merav Michaeli, a feminist icon who occupies the chair on which Peres sat for many years, conceded that the egregious allegations cast a heavy shadow on his legacy. This failed to calm the waters, perhaps even roiling them further.

Israel has known its fair share, and much more, of juicy scandals that felled many popular public figures well before the Me Too revolution entered our lives. Moshe Katzav, Peres’ predecessor as president, was convicted of rape and served a jail term. Former Defense Minister Maj. Gen. (Res.) Minister Yitzhak Mordechai was also convicted of sexual offenses, albeit less aggravated, as were Deputy Prime Minister Haim Ramon and one of Israel’s leading actors Moshe Ivgy, who this month started serving an 11-month jail term for indecent assault.

After President Katzav was convicted and sent to jail, it was Peres himself, as the incumbent, who was quoted as saying that his predecessor’s statue should be removed from the presidential residence garden where the statues of all of Israel’s presidents are displayed. “I'm not judging but I cannot avoid telling the entire history. Either they remove the statue or write what he has done next to it," he was reported as saying to his associates. Acting on former President Reuven Rivlin’s instruction, the plaque under Katzav’s statue now mentions his conviction and incarceration.

A decade after demanding the shaming of his predecessor for posterity, and five years after his own death, a similar demand could be made regarding his own statue, although Peres was never accused in his lifetime, no complaint was ever submitted to police against him, and he was never charged with a crime. Thus, his statue will likely continue to grace the presidential garden. The question is whether his legacy and place in history might be tarnished.