End of the Shimon Peres era in Israel

Israeli President Shimon Peres receives the Spirit of Davos Award as he soon plans to depart the stage as Israel's visionary elder statesman. 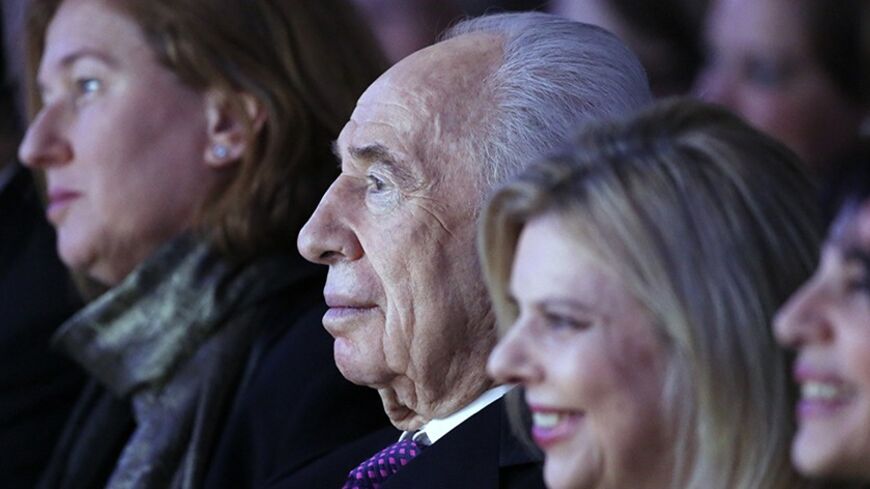 This is the last gathering at Davos that Peres will be attending in a formal capacity. His term ends in half a year, and while he would very much like to see it extended, apparently that will not happen. The Age of Peres is over. Peres is the last of the giants from the founders’ generation, but Peres has not been solely an Israeli figure for the longest time. He is the only Israeli politician who has successfully become an international figure. It would be very hard to imagine the political, diplomatic and public map of Israel — and the Middle East for that matter — without him.

In the last elections, a year ago, Peres was pressured to run. He was already 90 years old, but he still considered it. He was offered to stand at the forefront of a new centrist movement, together with Justice Minister Tzipi Livni and many others. He would have been the honorary president of the party, filling the number one slot and ennobling it with his spirit, his vision and his optimism. He would also draw voters.

The force behind the proposal was former Kadima Party Minister Haim Ramon, who was one of the founders and planners of Livni’s movement. Together, Ramon and Peres have stolen entire herds of political horses in the past. Ramon headed Peres’ election campaign when he lost to Prime Minister Benjamin Netanyahu in 1996. Now Ramon applied whatever weight he had on Peres and pressured him to join. Peres was born a politician and will die a politician. The idea appealed to him. He thought it over, agreed to briefly and then had second thoughts. In the end he said no.

Surprisingly even today, there are people considering the possibility that Peres will run in the next elections and offer his name to some list or other. (Go figure how old he will be then. Ninety-three? Or even 94?) He could take the symbolic first place, with no official position after the elections, an honorary “President for Life,” if you will. Peres is the last person to bear the torch of the Israeli peace camp, which has been dying right in front of us for the past 20 years. Post-Peres, it will be hard to imagine the lives of those who still believe that Israel should continue to strive for peace, whether there is a partner or not, just as much when it is difficult as when it is easy. Those people have no new Shimon Peres.

Netanyahu was also in Davos, but he was not invited to the event at which Peres received the award. A vast puddle of bad blood has been separating the two men for many months now. Officially, they speak well of one another, but Peres finally concluded that Netanyahu has been deceiving him for the past five years, and all his talk about peace is meaningless. There are no two people more different from each other than Peres and Netanyahu.

Peres is the perfect optimist. In any bad situation, he will first see the good. In every defeat, he will find the opportunity. Peres has the soul of an entrepreneur. His very essence is that of a man of vision. He spoke about nanotechnology 15 years ago. He identified the potential of high-tech 20 years ago. When he is shown the door, he comes back in through the window. He never rests, he reaches out to everyone and he floats far above the ground, sometimes removed from all reality and at other times way ahead of it. And he is always the optimist.

Netanyahu is the exact opposite, the ultimate negative, in photographic terms. In every opportunity, he will see danger. Around every corner, he will see signs of an ambush. He is a sworn pessimist, an admirer of stagnation, hesitant, chronically suspicious, an alarmist, a serial prophet of doom, a conservative who prefers to bury himself in his phobias, someone who is not ready to take risks and no great believer in the chance for change, or in the possibility of creating and crafting that change.

Peres always knew how to surround himself with creative, educated, open-minded people, who are admirers of the big world out there and who are adventurous as well. Netanyahu surrounds himself with a small, frightened, fossilized court of people just like him.

Now we are preparing to take our leave of Peres. We are left with Netanyahu. Neither of them have a replacement in the wings, at least for now, but the problem is that one of them will be leaving us and the other will be staying. There is no new Shimon Peres in Israel. There is no one like him. Livni is a bold and impressive woman, but she lacks the necessary political skills. Yair Lapid is Bibi Lite. We have not managed to raise the next Peres, and we can blame that on him, too. Peres is such an impressive figure that no one had a chance to thrive beside him. The only one who managed to do that was late Prime Minister Yitzhak Rabin, and he was assassinated.

It will be hard to imagine political and public life in Israel without Peres. It is generally believed that he will find some way to stay in the picture. He will remain the tribal elder, the last responsible adult. He will maintain his status on the world stage as a kind of Jewish Mandela. Never is never an option with Peres. Even at his age, everything is possible.

The battle to inherit his mantle is currently underway in Israel. As Mazal Mualem described here this week, with each day that passes and as the presidential elections approach, the number of candidates is increasing. At the last count, 10 people see themselves fit to serve as the next president of Israel. The most prominent of these are Knesset members Reuven Rivlin (Likud Party), Binyamin (Fouad) Ben Eliezer (Labor Party) and apparently Minister Silvan Shalom (Likud Party) and former Knesset member Dalia Itzik. There are also quite a few outside candidates, the most prominent of whom is Nobel Prize laureate for chemistry, professor Dan Schechtman.

Never in Israel’s history has there been a situation in which there are so many candidates less than half a year before the election. This is evidence of the breakdown of Israel’s political frameworks, the weakening of the entire system and the low point that Netanyahu’s standing has reached.

None of that exists today. Netanyahu’s support for one candidate or another is considered a burden and not an advantage. The parties have disintegrated as solid and clearly defined entities. Anyone can be president. It is a secret ballot. Knesset members stand alone with the ballots behind the curtain, and no one controls the situation.

Israel’s traditional political structure is disappearing right before our eyes. For decades, we have become used to right versus left, and coalition versus opposition, with the ultra-Orthodox and the Arabs on the sidelines. Today, the right has shifted to the center and the left has evaporated. Most of the public is confused and changes its voting patterns per campaign, because it has a hard time deciding whether it is center-right or left-center. Netanyahu has no solid public standing, and his party, the Likud, does not follow along with the moves he makes.

It remains to be seen where Israeli politics is headed and what it will look like in a decade or two. But one thing is certain. The processes described here are not healthy. Israel is considered to be the last island of stability in the Middle East, but anyone familiar with the internal processes taking place here knows that this stability is fragile, sensitive and vulnerable to any jolts.