In recent years, President Shimon Peres kept on believing that Prime Minister Benjamin Netanyahu would adhere to his vision of peace, while the Prime Minister steps away from his Bar Ilan speech and gets closer to his right wing electorate, writes Mazal Mualem. 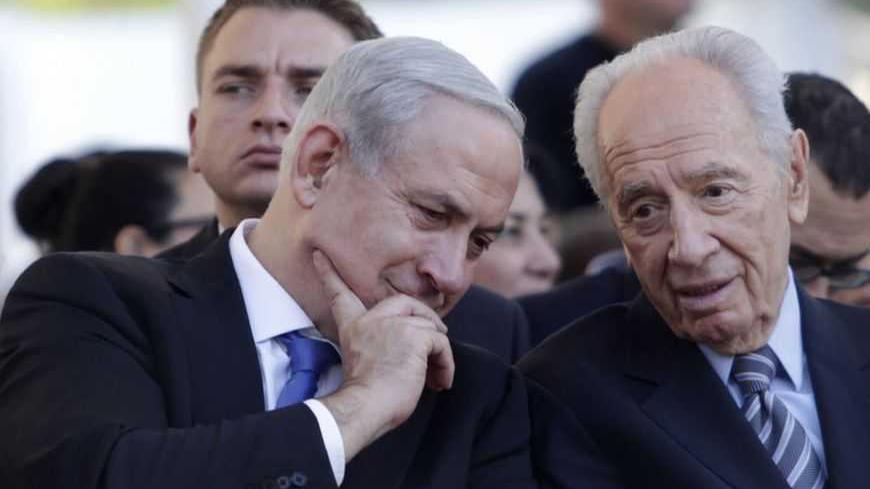 The television debate before the 1996 elections was the first time that Shimon Peres and Benjamin Netanyahu went head-to-head with each other. Netanyahu was victorious in that round, and two days later also won the elections and took the prime minister’s job away from Peres, on his way to his first term of office. Since then the relationship between the two has been complex. Over the last four years the relationship has been characterized by many hopes, mainly on the part of Peres, only for those hopes to be dashed. Nevertheless, it seems that last week, the relationship hit a new low.

After almost four years of stagnation in diplomatic negotiations, accompanied by severe deterioration in Israel’s foreign relations with the United States and Europe — Peres allowed himself to publicly express his frustration and disappointment at Netanyahu.

Peres did this in the course of a lecture he delivered last Sunday [Dec. 30] at the yearly ambassadors' convention of the Foreign Ministry. “Palestinian President Mahmoud Abbas (Abu Mazen) is a peace partner,” he said. “I know him for 30 years. No one will change my mind.” Then he added, “Even if they tell me that I cannot make my opinion known, because I am president.”

The presidential words of criticism, uttered in the midst of an election campaign, led to the following aggressive response from Likud-Beiteinu headquarters: “It is very unfortunate that the country’s president chooses to express a personal political opinion that is disconnected from the Israeli public's stance regarding Abu Mazen, the peace refusenik. [It is] a position that encourages condemnations of Israel in the international community." Netanyahu did not renounce this statement issued by Likud-Beiteinu, he only softened its style somewhat.

Sources close to the prime minister even blamed Peres for briefing journalists against Netanyahu’s policy, and cast suspicion on the president as the one who instigated the headline that was printed on Dec. 30 in Yedioth Aharonot, quoting a warning by a senior political source that “Netanyahu is leading Israel to catastrophe.”

The president, who will celebrate his 90th birthday in the upcoming August, sounds as if he has lost faith in the prime minister. This is not the first time this has happened.

In the course of last June [2012], Peres was gripped by real panic. From the reports he received, it seemed that Prime Minister Netanyahu was determined to attack the nuclear facilities in Iran — even without coordinating with the United States.

In those days, the controversy regarding an assault on the Iranian nuclear project remained a burning issue on Israel’s public agenda. Peres was frightened of the possibility that seemed reasonable at the time, that the prime minister meant to act on his threat.

Peres expressed his sweeping reservations of this course of action to Netanyahu in their regular, face-to-face meetings usually held on Friday mornings. But this time, he decided not to stop there. He was so upset that he didn’t control himself but invited several members of the Octet (a restricted group of eight ministers who advise Netanyahu) to emergency meetings. Peres implored these ministers to prevent the prime minister from carrying out an act he felt would be a total disaster. The meetings with Ministers Dan Meridor, Moshe (Bogie) Ya’alon and Eli Yishai, were secret. Their existence is made public here for the first time.

Netanyahu, who was aware of these meetings almost in real-time, restrained himself — but Peres continued. In honor of his 89th birthday in August, the President granted interviews to the three major television channels in which he repeated his message: that under no circumstances should Israel be allowed to attack Iran without coordinating with the United States. Of course, his words that night became the next day’s headlines.

This time Netanyahu rushed to respond and attacked Peres via his “associates.” These accused the president of deviating from his non-partisan presidential role, and attributed to him the following three “fateful” national decision-making mistakes: the Oslo Accord and its failure; the disengagement from the Gaza Strip in 2005 and the resultant rocket-terror attacks from Gaza; and, Peres’ opposition to the bombing of the Iraqi nuclear reactor in 1981. “The citizens of Israel had the good fortune that Begin ignored these warnings [in 1981],” they reminded anyone who might have forgotten.

On this background, it is hard to believe that only three and a half years ago, immediately after Netanyahu was elected prime minister for the second time — it seemed that he and Peres were on their way to a true honeymoon together.

At that time, Peres truly believed that Netanyahu was on his way to an historic political process, in the spirit of Peres’ own vision of two states for two nations. Thus, for example, at his speech to AIPAC (the pro-Israel Jewish lobby in the United States) in May 2009, three months after Netanyahu’s election, Peres sounded full of faith. “He was once my political adversary. Today he is my prime minister. He knows history, and he wants to make history. I am certain that peace is top priority for him,” Peres said confidently. A month later, in June 2009, Netanyahu gave additional validity to Peres’ hopes in his Bar Ilan speech; that was the first time that Netanyahu came out explicitly in favor of the two-state solution. Netanyahu’s decision to (temporarily) freeze construction in the settlements also filled Peres with confidence that despite Netanyahu’s right-wing coalition backing, the Prime Minister was serious in his intentions.

Without discussing the question of whether Peres’ attack on Netanyahu violated presidential non-partisanship, it is of interest to examine the crisis in the relations between the two men on two levels — diplomatic and political.

“Political” because Peres was, and remains, a political animal. Apparently the Israeli media did not pay enough attention to the feverish consultations Peres held a few weeks ago in his house, in which he seriously examined the option that, at age 90, he would resign from his presidential post and run against Netanyahu for prime minister in the upcoming elections. Then, the idea sounded crazy.

Now it seems that the matter was definitely serious. Strategist Reuven Adler and former Kadima man Haim Ramon supported this idea. They examined the possibility of re-creating the Left-Center dream-team bloc: to place Peres at the head of the large party, and underneath to install Tzipi Livni, Ehud Olmert, Yair Lapid and Shaul Mofaz. As fallacious as it may seem, Peres “loved” the idea of running against Netanyahu again. But the idea crashed almost as quickly as it had been floated. In Peres’ surroundings, it was explained that he had ultimately decided not to  put the presidential establishment to shame, despite the fact that his chances for victory were good.

One way or the other, the story elucidates the following point: Peres always was — and always will be — a political animal and that fact is hard for him to hide. By the way, just as Netanyahu heard about Peres’ involvement in the Iranian nuclear affair, so he heard about those other consultations held by the president [with leading ministers]. Netanyahu did not like the latter actions any better than the former.

Was there really a foundation for Peres’ belief at the beginning of the term of office, that Netanyahu intended on turning his back to his right-wing electorate that had voted him into the prime minister’s chambers? Did he really believe in a new Netanyahu who had crossed the ideological Rubicon, and was ready to pay political prices for his vision?

The answer to this, based on things that Peres said, is a resounding “yes.” He had foundation for hope, on the basis of personal talks with Netanyahu, that the latter had intentions to carry out an historic process. But in the summer of 2011, something happened that changed the picture as far as the president was concerned. Peres, who at the time wore the diplomacy hat on his head, invited (PA Chairman Mahmoud Abbas) Abu Mazen to a decisive meeting. The meeting was supposed to have been held in Amman, with the goal of jump-starting the political process. Peres was getting ready to leave for the Jordanian capital when at the very last minute, Netanyahu asked him to cancel the meeting.

There was great discomfiture and embarrassment because Abu Mazen was already on his way to Amman, with the understanding that Peres would introduce a concrete proposal. Netanyahu, it turns out, asked Peres to wait two or three days until a new date for the meeting could be set. This never happened.

But then Netanyahu led the way for the release of Israeli kidnapped soldier Gilad Shalit, and Peres again became hopeful. Like a father to a wayward son who returns home, Peres flattered Netanyahu with warmth and affection for taking such a brave decision. Peres expressed his feelings about Netanyahu to ministers and Knesset members he met during a Sukkot holiday event with the Western Wall rabbi by saying, “He made a decision contrary to his electoral base, and I am very proud of him. You need to be courageous in order to achieve peace. [Prime Minister Netanyahu] Bibi proved that he has courage, and my hope is that he will make more fearless decisions [in the future]. We have to continue to back him, for the benefit of the people of Israel. I will give him [support]. I believe that he has the necessary fortitude. I believe that he is capable of bringing peace to Israel.”

But guess what happened — he was disappointed again. As opposed to Peres, Netanyahu did not see a direct connection between the Shalit deal that only weakened Abu Mazen, and the re-starting of the political process.

Even when Netanyahu brought Center party Kadima into his government and it seemed that he was poised to relinquish his natural right-wing partners, Netanyahu eventually capitulated to Shas in the ultra-Orthodox draft crisis, leading to Kadima’s secession. Then, too, Peres’ high hopes went up in smoke.

The fact is that when we burrow through Netanyahu’s last four years as prime minister, we see that he was never even close to abandoning his right-wing electorate, even if Peres hoped he would.

But even now, as Netanyahu stands on the cusp of a third term of office, Peres has no intentions of giving up.

Mazal Mualem started her journalistic career during her military service, where she was assigned to the Bamachane army weekly newspaper. After her studies, she worked for the second leading Israeli daily Maariv. In 1998 she joined Haaretz, covering local governance, and later, she was appointed chief political analyst of the paper. After 12 years with Haaretz, she returned to Maariv as their chief political analyst. Parallel to her writing activities, Mazal Moalem presented a weekly TV show on social issues. Mazal Mualem holds a masters degree from the Tel Aviv University in security/political science. She lives with her daughter in Tel Aviv.