At 90, Israeli President Shimon Peres can teach the young generation a thing or two about dreams, looking one step ahead. 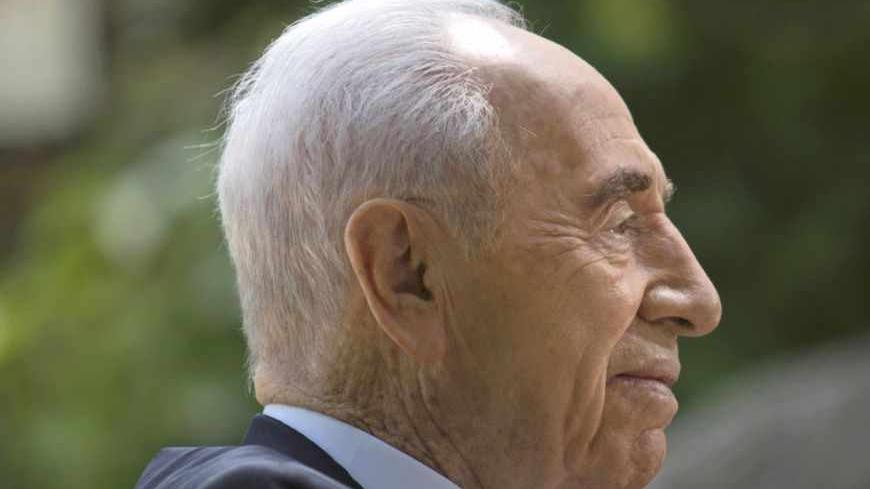 President Shimon Peres is what Israel should have been.

He is a prototype who has been shelved due to the situation. He is a light unto the nation, a vision and paragon to the region; he is a beacon of lucid thought that is predicated on clear moral values and tenacious pursuit of peace and brotherhood among nations. For dozens of years, Peres has demonstrated steadfast resolve for these notions.

The problem, however, is that Israel is no longer at the same place.

When Peres stops for a second to look around him, what he finds is an Israel that has sailed to a different place altogether. Albeit much better than its surrounding neighbors, it is drifting away nonetheless. The current situation is bizarre and charming all at the same time: While Peres is soaring high above the country he had helped to establish, the latter continues sweating profusely in the lower spheres of Middle Eastern reality. Peres can be likened to a powerful satellite orbiting in the area, with eyes wide open and a feverish mind, connected and disconnected at the same time to his homeland below, maintaining with it a continuous love-hate relationship, whispering in its ears words of love, even though it is defiant, skeptical, headed in different directions and changing its face.

These days, when Peres celebrates his 90th birthday, he is a much more powerful brand then the state of Israel itself. This is not a country with a president, but rather a president that carries the yoke of a country around his neck, like a heavy albatross. Notwithstanding, he doesn't give up on it, and it doesn't give up on him. To the extent it's up to him, Israel will continue to cling onto Shimon Peres' neck.

His persuasive skills are boundless. There isn't a single person who Peres thinks he cannot persuade. If you just let him, he will talk to outgoing Iranian President Mahmoud Ahmadinejad throughout the wee hours of the night, trying to convince him that the Jews are not such a bad deal after all. When Ariel Sharon, one of Peres' bitter rivals, was elected prime minister, everyone panicked, that is, except for Peres. He quickly set up a secret political axis with Sharon, persuading him to allow him to have secret talks with former Palestinian Prime Minister Abu Alaa (Ahmed Qurei), and came back with an agreement. Sharon, of course, never implemented that agreement, but Peres nonetheless delivered the goods.

He acted similarly during the rotation government, when he served as alternate prime minister in rotation with Yitzhak Shamir in the 1980s. Peres secured a historic agreement with King Hussein of Jordan ("The Peres-Hussein London Agreement") which Shamir torpedoed. To this day, Peres believes that this was the greatest missed opportunity of our generation; a one-time opportunity to end the conflict in an original way with Israel not taking major risks.

Even now, when Prime Minister Benjamin Netanyahu is in power, Peres doesn't give up. During Netanyahu's previous term as prime minister, Peres managed to convince him to send him to hold quiet talks with Palestinian Authority Chairman Abu Mazen [Mahmoud Abbas]. Netanyahu stopped him at the last minute, shortly before he was to hold the last meeting with Abu Mazen in Jordan to reach final agreements. If you think Peres has given up, you'd be dead wrong. He keeps on trying, striving, persuading, coming up with new ideas, finding a crack in the door or some secret avenue through which he could somehow blaze a road to the next secret dialog, which, of course, will end in stalemate or disillusion; perpetuum mobile.

Peres is a man of contrasts. He is the biggest winning loser you can think of. There is no political battle which he hasn't lost, usually by a very small margin. He's been a professional punching bag and the laughingstock of the political establishment; yet, he's never given up, he's never lost hope, he always came back climbing through the window after being booted out through the front door. He always takes umbrage, always feel disenfranchised; he always fights for his place, for recognition, for his right to keep moving forward.

Today, looking back, his life is a resounding victory, though a frustrating and laborious one. If you search the Middle East high and low, you will not find anyone who has had more influence, who has persevered more, who has invested more energy in the effort to turn blood into water and who has burrowed through the mountain or climbed the slippery slope more than Shimon Peres.

He will always be there, even when catastrophes unfold and everything is ablaze. When it seems that there's nothing more to do, he, on the other hand, will always find something to do. He is the man who succeeded in losing the premiership to Netanyahu a few months after the assassination of Prime Minister Yitzhak Rabin [November 1995], when it seemed as if the right-wing camp in Israel was going to disappear for many generations. This was a burning defeat over a fraction of 1% of the votes.

There isn't a politician in the world who would not have been shattered to pieces in the wake of such a loss. Ashen-faced, hollow-eyed and despondent, Peres picked himself up the following morning and drove off to his office as usual. Today — 17 years after that loss, when you could not have found a single person in Israel who would have placed a wager on Shimon Peres — he is able to bring to Jerusalem the world's most prominent leaders, from former President Bill Clinton to singer Barbra Streisand, for his 90th birthday celebration. Even Netanyahu, tired and downtrodden, is still with us, but this is not his celebration. Had it been Netanyahu's birthday yesterday, a few Likud party caucus members and a handful of Knesset members and ministers would have shown up.

When it's Peres' birthday, everyone shows up.

Peres once told someone that if he were to retire, he would die. I believe that Peres knows what he is saying. The secret of his stamina is pushing forward. The frequent failures and losses that dot his career have only done him good. Thirsty for love and wishing for success, he continues to draw dividends, attention and embraces galore.

He has turned every failure into the driving engine of his next endeavor. He is still the persecuted little Jewish boy in the ghetto, trying to survive and persuading everyone around him that he has the right to live. Although he never served in the Israel Defense Forces (IDF) — when the IDF was founded he had already been a senior member of the defense establishment — no one has had a more decisive impact on Israel's power buildup than him.

Peres is the father of the "Dimona Project," which, according to foreign sources, consists of more than 200 nuclear warheads. Unfortunately, he is also the father of the Jewish settlements in the territories which started on his watch. He is also the father of the peace process, which he envisioned, built brick by brick and raised with painstaking care, and which he now bewails. He is the prophet of Israel's technological excellence, the Weizmann Institute. He is the big champion and visionary of the Jewish genius who has turned Israel into the world's second power in terms of high-tech, as well as a leader in areas such as medicine, nanotechnologies and microbiology.

Peres never takes a respite. He doesn't know how to. Even when he does take a rest, his mind remains feverish. He reads books, he writes books, he writes poems, he is friends with countless intellectuals, philosophers, writers and poets. He is a man of words just as he is a man of actions. He now says that he is no longer interested in himself, that he no longer seeks respect or some job. But that's not altogether true. Having been hunted down mercilessly for years by Israeli politics and having been pelted with rotten tomatoes and constantly been vilified and slandered, Peres is still thirsty for love, achievements, recognition. He'll never get his fill.

In just over a year, he is expected to end his term as president of the state of Israel. There is already some talk about extending his term in office, but constitutionally-wise, this is a fairly complex move. What will Peres do in the middle of next year when he is forced to retire from the presidency and join the regular folk? It remains unclear.

What is certain, however, is that he will do something. Otherwise he will die. He is in the final stages of establishing an international forum of large global companies, mainly from the high-tech world. He wants to galvanize them into becoming a key, driving force that will lead the world. Peres believes in economics, people and market forces. His trust in governments and nation-states has dissolved. He understands that borders have been knocked down and restrictions lifted. What connects people today is not religion, nationality or physical borders. Rather, it is the social networks, the Internet and common dreams.

Although Peres is a nonagenarian, when it comes to dreams, however, he can teach the young generation a thing or two. More than a decade ago, before we got used to the Internet revolution, he had already been talking about nanotechnology. We ridiculed him. But everything he said is happening today. He now talks about brain research. Wherever he goes, there will be a trail of young believers following in his footsteps; usually these are gifted, bright people who toil hard to develop his raw ideas. Peres believes that accelerated brain research will yield benefits to mankind in many areas. The mind — says the president of the state of Israel — is the largest source of energy and wisdom in the universe, of which we are familiar with only a mere fraction. When we get to know it inside out, we will be able to change the world. Harnessing the brain for the global human effort and other such ideas — however outlandish — can only be entertained by Shimon Peres.

At 90, he is more popular than ever. It's flattering, addictive, inebriating as well as deceiving. He is a captive of his own popularity, fearing to lose it. He touches it every morning, making sure it's still there. He knows this could be a fleeting popularity. As soon as he rolls up his sleeves and sticks his hands into the political muck, he will be hurled back to his natural place as the right-wing's punching bag. But there will always remain a bee in his bonnet as well as the urge to go on trying to change the world. Even at 90. Once his ambition starts fading away, so will he.