The era of former president Shimon Peres, the last Israeli who was “there” — when Israel was established — is coming to its end. 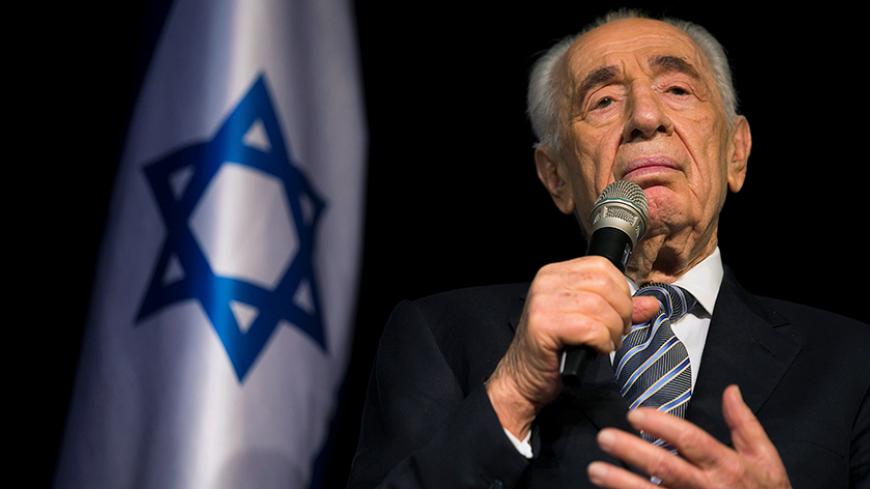 Israel's President Shimon Peres speaks to the media during a news conference in the southern town of Sderot, July 6, 2014. - REUTERS/Amir Cohen/File Photo

On the evening of Sept. 13, it looked like it was all over. Former President Shimon Peres, 93, the last active leader of Israel’s founding generation, was hospitalized in critical condition after suffering a stroke. At first, he was conscious and relatively lucid, but after about half an hour, it emerged that the internal bleeding in Peres’ brain was spreading. Doctors were forced to sedate and intubate him. In a statement to journalists, his son Chemi said, “It seems that we will soon be required to make decisions, but not at the moment.”

It was clear to the family’s inner circle that should the situation continue to deteriorate, they would let Peres depart this world peacefully. They would not beg the doctors to keep him on life support in a persistent vegetative state, as in the case of former Prime Minister Ariel Sharon, who also suffered a stroke, in January 2006, but only died eight years later, in 2014.

The morning of Sept. 14, things looked more optimistic. Peres had survived the night, and the bleeding in his brain had stopped. When doctors woke him and tried to communicate with him, Peres responded with a handshake. A cautious sense of optimism returned to the corridors of the giant Sheba Medical Center at Tel Hashomer. Was it possible that the ultimate Israeli comeback kid would do it again?

At the moment, Peres’ chances of recovery are not good. At the age of 93, miracles are hard to come by. On the other hand, one should not forget that Peres has been the most eulogized figure in the history of Israeli politics, and each time, he survived to have the last laugh on his eulogizers.

In 2014, after finishing his term in the President’s House, the ninth president of Israel was clearly going downhill. Some of his perpetual vim and vigor had faded. Outwardly he retained his poise and continued to run around the world at an unbeatable pace, but in private conversations, it emerged that despair had started to gnaw at him. Peres is a man of hope. He had never given up, never despaired. When someone would throw him out the door, he would return through a window. He promoted his dream of peace even in hostile right-wing governments. He even went all-out in trying to persuade Prime Minister Benjamin Netanyahu to negotiate with the Palestinians, but to no avail.

Over the last two years, with his career behind him and Netanyahu as Israel’s prime minister, Peres’ hope began to give way to anger and despondency. Political sources say that in private discussions, Peres talked about the direction in which Netanyahu was leading the country, Israel’s uncertain future and the dangers lying in wait for the country if no real leader emerged to put the country back on track. For the first time in his adult life, Peres was not a player in the political game. His name was never mentioned as an alternative, not even a temporary alternative, for changing Israel’s diplomatic direction.

Peres watched the Netanyahu-led deterioration in Israeli-US relations with a heavy heart, but could do nothing to help from the sidelines. When he was president, Peres served as the “Wailing Wall” of the US administration and even received the Presidential Medal of Freedom, the highest civilian award in the United States, from President Barack Obama in 2012. Those days are also behind him, however. Peres continued his globe-trotting activities, but those around him understood that the man was fading in front of their very eyes. Peres’ age had finally caught up with him, when his dreams were exhausted and his challenges had become insurmountable.

Peres is the last Israeli who was “there” — when Israel was established. He was a member of the founding generation that supported the state from its first day of existence, and he was one of those responsible for building its strength even while fighting the War of Independence. Peres is considered the father of Israel’s nuclear enterprise, the man who made the reactor in the town of Dimona happen. He is in one way or another connected to practically every significant event in Israel, every important enterprise or project.

Yes, Shimon Peres served the state, twice as prime minister (1984-86, 1995), as foreign minister (1986-88, 1992-95, 2001-02), as president (2007-2014) and in countless ministerial roles of all types and stripes. He had his finger in every pie. In the 1980s, Peres was the most-hated politician in Israel, but after being elected president, he became the country’s most well-liked figure. He was a man of international repute, a global brand, and viewed as a modern-day prophet. He talked about nanotechnology when no one else had heard of it and conceived of a large portion of the innovative ideas that turned Israel into what it is today.

On the day Peres collapsed, it was reported that the Israeli justice and internal security ministers had met with a delegation of Facebook representatives in an ongoing effort to harness the giant social network for the war against terror, terror that is actively encouraged on Facebook pages. I recall a prophecy Peres once shared with me more than a decade ago. “Governments no longer lead and direct the world,” Peres said at the time. “The world is led by, and will be led by, global companies. That’s where the real power lies, that is what holds the key to change.”

Peres said, Peres did. He created an enormous network among the heads of large global companies in an effort to yoke them to universal missions to promote peace. Peace was and remained his greatest dream of all, but a dream not realized.

Moroccan King Hassan II died in July 1999. Peres had shared a deep, close relationship with Hassan for many years, so he joined Prime Minister Ehud Barak’s entourage attending the funeral, which was held in the capital city of Rabat. I marched there at Peres’ side, at the most powerful funeral procession I have ever seen. All the world’s movers and shakers were there, from US President Bill Clinton to Russian President Boris Yeltsin to the rest of the world’s leaders, from the West and East, from the Second and Third Worlds. Every Arab ruler took part in the funeral procession, which included prominent religious leaders as well.

To my utter amazement, the millions of people who gathered along the path of the procession ignored Clinton, Yeltsin and all the other heads of state. Instead, it was Peres’ name they shouted. “Monsieur Peres, Monsieur Peres,” I heard. If I had not heard or seen this with my own ears and eyes, I would never have believed it. This event transpired in the heart of an Arab country, and Peres, 76 at the time, was hailed and accepted by the masses of Moroccans mourning the loss of their king.

Now, Peres is fighting for his life in a Tel Aviv hospital. Even if he survives the massive stroke, it will not change the fact that an era has come to an end. The last of the giants has left the arena. Israel must start to get accustomed to life after Shimon Peres.