Former Israeli President Shimon Peres' Middle East peace legacy can only be realized if the settlements he himself approved many years ago are dismantled. 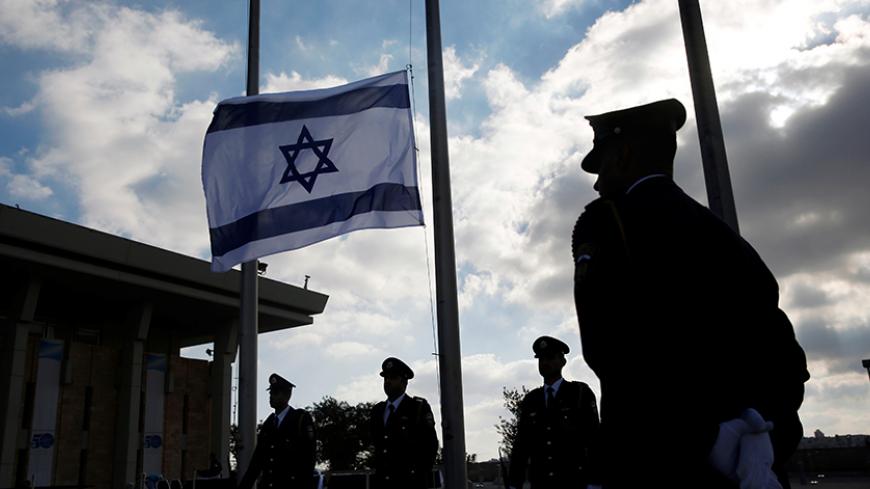 Israeli presidential guards stand next to a national flag, which was lowered to half mast during a ceremony marking the death of former Israeli President Shimon Peres, at the Knesset, Jerusalem, Sept. 28, 2016. - REUTERS/Ronen Zvulun

Several days before he signed the Oslo Accord in September 1993, I asked Shimon Peres, then foreign minister in the government of Yitzhak Rabin, how he would like to be remembered in the history books. “As one who contributed to an Israel strong enough to make peace,” he answered. Peres, who died Sept. 28 at age 93, leaves behind a state with the most powerful military in the region and one of the world’s strongest high-tech industries. Thanks to Peres and his generation, Israel is an island of stability in the heart of a stormy Middle East. He started pulling Israeli troops out of Lebanon and extricated the economy from runaway triple-digit inflation in the mid-1980s. Peres paved the way to the Oslo Accord with the Palestinians, which led to the peace agreement with Jordan in 1994 and strengthened Israel’s international standing.

Peres did not live to translate this power into peace. The State of Israel did not enjoy the fruit of his labor. The 1979 peace agreement with Egypt was signed by Prime Minister Menachem Begin of the Likud Party shortly after the 1977 elections that ended Labor Party rule. The negotiations Peres conducted with Syrian President Hafez al-Assad in 1996, after Rabin’s assassination, led to a dead end. Prime Minister Ariel Sharon was the one who led Israeli troops and settlers out of the Gaza Strip in 2005. Prime Ministers Ehud Barak and Ehud Olmert were much closer than Peres ever was to a permanent status agreement with the Palestinian side.

Peres’ attempts to bridge the divide between Prime Minister Benjamin Netanyahu and Palestinian President Mahmoud Abbas ended in bitter disappointment. Peres spent his final years in politics as an international envoy trying to explain the policies of Israel’s right-wing governments. In his early days as president he went as far as Washington to advocate for Netanyahu, who had lost President Barack Obama’s trust.

Leaders like Peres are usually described as “men of vision and action.” But often, as in his case, the action and the vision are not synchronized. Not only that, the action undermines the vision and makes it virtually impossible to realize it. In his role as “a man of action,” Peres, as defense minister in charge of the occupied territories from 1974 to 1976, was credited with the establishment of a long list of settlements. In the settlement of Ofra, the one whose houses are mostly located on private Palestinian land, residents sit in the cool shade of its first tree, planted by Peres in the 1970s. The founder and first mayor of the settlement town of Ariel, the late Ron Nachman, once showed me a 1977 document signed by Peres, approving the establishment of the new settlement in the heart of the West Bank’s Samaria region.

In his 1978 book “And Now Tomorrow,” published a year after the Likud came to power, Peres wrote: “If the government freezes and prevents settlement in areas worthy of being settled (on lands Israel conquered in 1967), then this is like writing a White Book for ourselves,” a reference to the White Paper policies of the British mandatory authorities limiting Jewish immigration to Palestine.

A person who was very close to him told me that Peres was an unsurpassed master of constructing a view of reality to fit his vision or interest. Thus, for example, in the 2002 military operation codenamed Defensive Shield, which dealt a massive blow to the institutions of the Palestinian Authority and to its standing, I asked him how he could be a senior partner in a government destroying his vision of peace. “What do you want from me?” answered Peres, then foreign minister in the Sharon government. “How could I oppose a move supported by the Americans?” He did not like my follow-up question. “And how could the Americans oppose a move supported by the architect of the Oslo Accord, a Nobel Peace Prize laureate?” Peres wanted so badly for everyone to like him.

The mechanism of tailoring reality to circumstance helped Peres fly on the wings of the vision he called “a New Middle East.” When he sought to run against Ehud Barak in the 2001 elections for the premiership, he insisted this would save the people of Israel. When he decided to defect from the ranks of the Labor Party after losing the leadership in party primaries to Amir Peretz, he argued heatedly that joining Ariel Sharon’s Kadima Party was an essential step toward peace in the Middle East.

One of Peres’ favorite turns of phrase was that one can make an omelet out of an egg, but one cannot make an egg out of an omelet. Are the 400,000 settlers Peres left behind not turning the Zionist vision Peres devoted his life to strengthen into scrambled eggs? And what about making Israel stronger — which Peres claimed enables it to make peace with its neighbors? The democracy in the Israel he leaves behind is weakened, the leadership is mediocre-minus, society is deeply divided and the country’s international standing is shaky.

Peres was the attractive, serious, tolerant and cultured face of Israel. He made millions of Jews around the world stand tall. He planted a bit of hope in the hearts of peace lovers among the Palestinians and the world, which last week saw at the United Nations an Israeli leader, Netanyahu, who is an expert in mongering fear and sowing division. The man who spent years lathering endless layers of concealer on Israel’s ugly face is gone, never to return.

Uri Avnery, the man of peace, also 93, compared Peres to Sisyphus of ancient Greek legend, the man sentenced by the gods to roll a heavy stone to the top of the mountain all his life. Every time Sisyphus neared the mountaintop, the stone would drop from his hands and roll down. And perhaps, even after 93 years, Peres was ahead of his time. Perhaps the new Middle East, which has turned into the insane Middle East, will once again become a cradle of civilization. Maybe the day is near when Israel will be a light unto nations? As Peres used to say, despair is not an action plan.

Peres’ legacy requires rectification of the inexcusable act in the occupied territories in which he was complicit. The leaders arriving Sept. 30 to accompany him to his final resting place cannot simply heap praise on Peres’ vision and make hollow promises to follow in his footsteps. This path has to pass through difficult decisions against the occupation, which is threatening to turn his life’s work into ashes.