The men partook in the 2014 attack by the al-Qaeda-affiliated Jabhat al-Nusra on the Lebanese army in the town of Arsal, according to the Lebanese military. 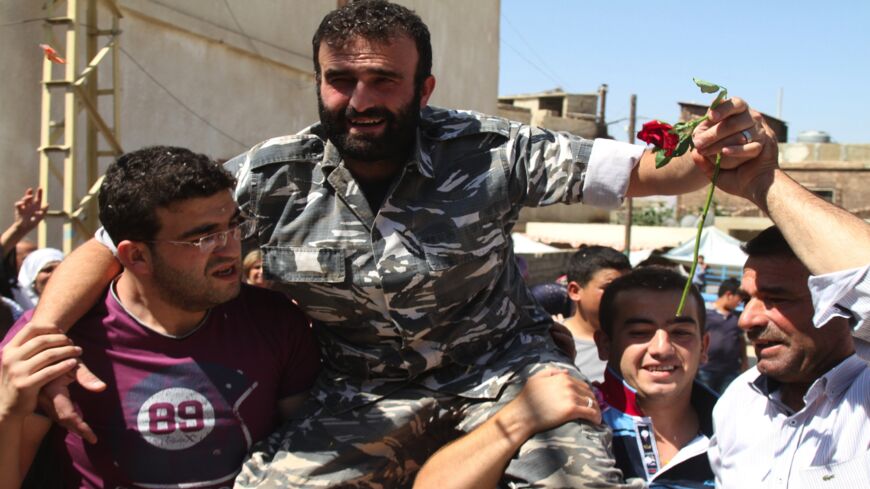 Saleh al-Baradei, a Lebanese police officer kidnapped along with four soldiers by Jabhat al-Nusra, the Syrian branch of al-Qaeda, celebrates with relatives after his release on Aug. 31, 2014, in the town of Baalbek in eastern Lebanon's Bekaa Valley. The men were taken from Arsal on Aug. 2 during a fierce battle between the Lebanese army and jihadis who had crossed the border from Syria. - AFP via Getty Images

A Lebanese military court sentenced a group of Syrian Jabhat al-Nusra fighters to death Tuesday for the killing of Lebanese soldiers.

The men were convicted in relation to the 2014 battle in Arsal, Lebanon, near the Syrian border. As members of the al-Qaeda-affiliated Jabhat al-Nusra, the men killed Lebanese army and Syrian Arab army soldiers, kidnapped Lebanese soldiers and stole weapons, according to the Lebanese military.

The battle of Arsal took place following a Jabhat al-Nusra attack on the Lebanese army in the area. The Syrian military, which was also battling Jabhat al-Nusra at the time, helped their Lebanese counterparts. The fight ended in a Lebanese victory.

Jabhat al-Nusra has since rebranded itself to Hayat Tahrir al-Sham. The group controls much of the rebel stronghold Idlib province in northwest Syria and has a more complicated relationship with al-Qaeda now.

There was considerable spillover violence from Syria into Lebanon during the early years of the Syrian civil war.