The meeting this week at the White House of the US-Israel Strategic Consultative Group did not reassure Jerusalem — on the contrary. 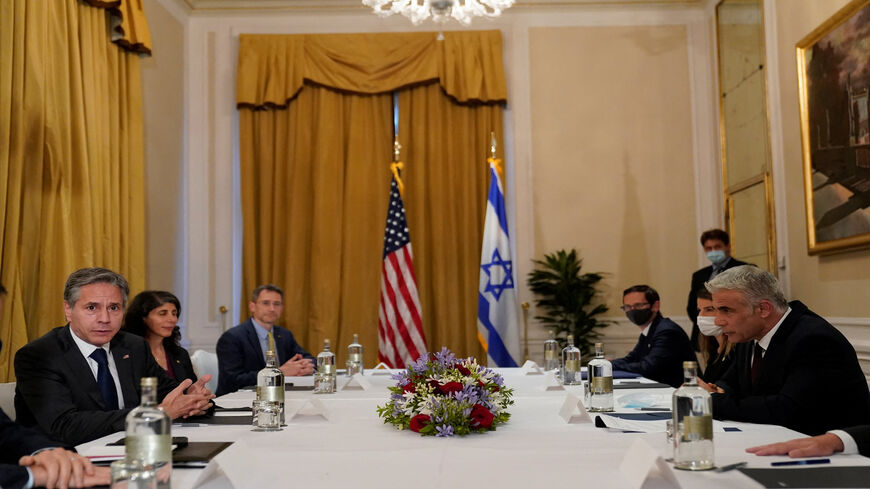 US national security adviser Jake Sullivan and his Iraeli counterpart Eyal Hulata and their teams met in the White House Oct. 5, within the framework of the US-Israel Strategic Consultative Group. The press readout following the meeting described the session as “constructive” and “open.” A senior administration official briefing reporters on condition of anonymity said the Biden administration was committed to talks with Iran to prevent it from obtaining nuclear weapons, but if diplomacy fails, he said, "we'll be prepared to take measures that are necessary."

He continued, “Obviously, if that [diplomacy] doesn’t work, there are other avenues to pursue, and we’re fully committed to ensuring that Iran never acquires a nuclear weapon,” but refused to elaborate. At the same time, according to Israeli media reports, Israel will be asking the Americans to put together a package of sanctions against Iran in case the talks fail.

Diplomatic sources say that away from the public eye, the climate in closed meetings is far less favorable. In fact, the opposite may be true. Israeli frustration is growing, as is the realization that Israel and the United States aren't on the same page and their strategic perceptions of the Iranian nuclear threat differ substantially. A senior Israeli defense official, who did not take part in the talks but was privy to their contents by dint of his very close position to Defense Minister Benny Gantz, described the situation to Al-Monitor as follows.

“Yes, the talks were good, the atmosphere was very friendly and open, the messages were conveyed, but in terms of substance, the situation is bad. Perhaps even very bad,” he said. “Right now, there is no joint operational contingency plan against Iran should efforts to return to the nuclear agreement fail. And even worse, the Americans do not have any solution whatsoever to such a situation. They do not have a Plan B. They do not have alternatives and what is truly troubling is that they are not really concerned about it. They see events in a completely different way than we do. It’s their right, of course, but it is of great concern to us.

“True,” the senior official continued, “The Americans continue to stress — at our request — that if the diplomatic path fails to yield results, there are other options, but it is not clear whether they mean it. They are not focused on Iran, they are focused on China and domestic US issues, the coronavirus pandemic, and by the fact that the administration — just like the Israeli government — has to struggle to push every law or decision through Congress. The lights in Washington are on at night not because of Iran, and that is worrisome.”

The Israeli effort is focused on trying to illustrate to the Americans and convince them that military action could also provide a solution to the Iran nuclear problem, not just talks, that they should display serious intentions and convince Iran that along with the carrot, the United States is also holding a stick. This effort has failed for the time being. Al-Monitor has learned that during the many meetings between the sides, many Israeli officials, chief among them Gantz, proposed a series of actions, such as diversionary tactics to increase pressure on Iran.

According to the senior defense official, these could have included a “giant military drill in the Persian Gulf or in a neighboring state, force movements such as one or two aircraft carriers deployed in the Gulf, such as a leak about an additional test of bunker-busting bombs. Those kinds of things.” The Americans, however, “are not on board. The crux of the matter is that they do not feel pressured. The severity of the situation does not really trouble them; they do not think that American national security is under threat of an Iranian nuclear effort. As far as they’re concerned, there’s no drama. We’re starting to miss the Obama administration.”

During the US-Israel talks, when asked what they plan to do if the Iranians refuse to return to the nuclear agreement, the Americans apparently claimed that they could eventually opt for military activity, but the Israeli side is not convinced. “How can you go at once from zero to 100? Preparing a military operation takes time. It requires measures and a modular plan; it requires displays of determination and motivation. We have not identified any of these on the American side and that scares us to death,” said the top Israeli official.

Israel has been presenting the Americans with massive quantities of fresh intelligence. As of now, Israel is one of the world’s largest repository of intelligence information on the Iran nuclear issue, after Iran reportedly cracked and brought down a major US intelligence network operating there. Israel is focused on proving Iran’s true intentions of acquiring nuclear military capability, and illustrating the potential results of its success. According to the Israeli source, that means showing to what extent this would affect the region, and to what extent it constitutes a threat not just to Israel’s national security but also that of the entire Middle East and the United States, as well. “We are simply trying to prove to them that the Iranian saga could end up like the North Korean one, if the current sleepiness continues. Right now, we don’t seem to have convinced them,” he added.

Officially, the Americans concede that Iran’s breakout time has shrunk from about one year to several months. This shrinkage occurred due to the US withdrawal from the agreement by President Donald Trump and under the influence of former Prime Minister Benjamin Netanyahu. The Americans describe this shortened time period as concerning, but the Israelis insist their American interlocutors are not acting concerned. In addition to preparing a substantive nuclear option, Israel believes a new sanctions package is also required, one that would be particularly intrusive and painful, to be imposed on Iran should the talks fail. Apparently, the Americans have not put together such a package, either, and do not seem too enthused about doing so.

The situation described here is generating a type of existential depression on the Israeli side. No one is talking about the administration in a derogatory manner, as Israelis did at the time about the Obama administration. Relations remain open, fair and sincere, coupled with mutual respect. The frustration is reflected mostly in the discussions taking place in Israel on accelerating efforts to revive the Israeli military option and mobilize as many of its allies in the Middle East, such as Saudi Arabia, the United Arab Emirates and others, which would add their voice to the pressure on Washington. The way things look right now, the road ahead is still long and no one is willing to gamble on the outcome: An Iranian bomb, a US strike or something in between.