Prime Minister Benjamin Netanyahu is hinting to the new US administration that reentering the original nuclear deal with Iran could spell Israeli military action. 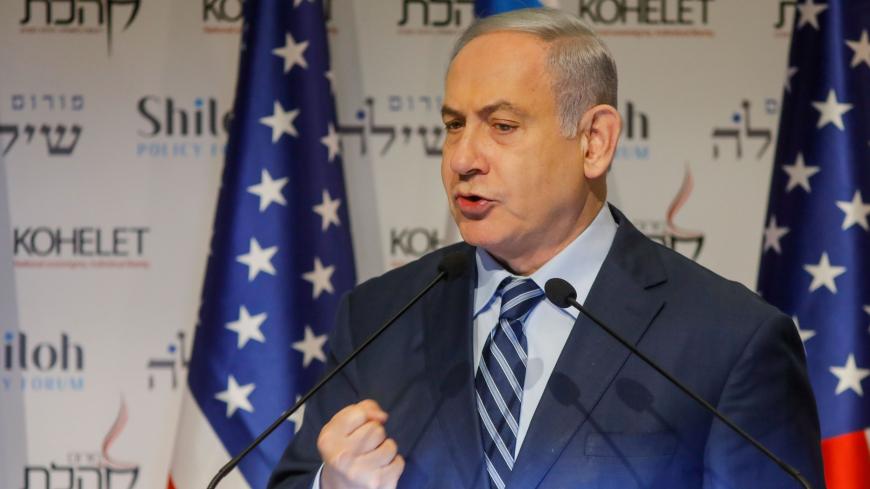 The United States is not the only one preparing for the resumption of negotiations on Iran’s nuclear program. Israel, too, appears set to restore the historic drama to the world stage almost six years after it peaked with the signing of the deal with Iran and largely dropped from the agenda. Now, with the Joe Biden administration intending to enter into negotiations with Tehran as soon as possible and given reports reaching Jerusalem that some of the new president’s people believe the United States should first return to the original accord and only then discuss “amendments” or “improvements,” drama is unfolding behind the scenes in Israel.

Israel’s former national security adviser, Maj. Gen. (res.) Yaakov Amidror, framed the issue in clear terms in Jan. 18 comments at the Jerusalem Institute for Strategy and Security. “In a situation where the United States returns to the old nuclear agreement with Iran, Israel will have no choice but to act military against Iran to prevent it from manufacturing a nuclear weapon,” he said.

Amidror no longer holds an official government role, but remains a close associate of Prime Minister Benjamin Netanyahu and his remarks often reflect Netanyahu’s views and even his guidance. His latest remarks, so it seems, were hardly a slip of the tongue. They were probably deliberate, measured and intended to raise the ante and convey a veiled threat to Washington: If you reject our recommendations and return to the original Iran nuclear deal, all options are on the table, including the military one.

Similarly, last week Channel 12 military affairs analyst Roni Daniel quoted an unnamed senior security source who put it bluntly that if the United States rushes back into the original nuclear agreement without making significant changes, Israel will find itself in a very difficult spot.

“Someone is confused,” another senior Israeli security source told Al-Monitor on condition of anonymity. “We are back in the days when Israel convinced itself that it — and not the United States — was a world power, and this is not particularly wise.”

Between 2009 and 2013, Israel toyed with the military option in which it had invested some $3.7 billion, debating at length the pros and cons of a direct hit on Iran’s nuclear facilities. It sent US-Israel ties into a tailspin and tensions persisted until talks were concluded between the five permanent members of the UN Security Council (the United States, United Kingdom, China, Russia, France and Germany, known as the P5+1) and Iran. Israel’s window of opportunity slammed shut when the deal was inked in July 2015.

Is history repeating itself? Probably, but the circumstances are quite different. In the past, the heads of Israel’s defense and security agencies opposed a military strike on Iran. At the time, military chiefs Gabi Ashkenazi and Benny Gantz, late Mossad head Meir Dagan and his successor Tamir Pardo, the military intelligence, air force commanders and the Shin Bet domestic security agency issued stern warnings against embarking on such an adventure. The political leaders, Netanyahu and his Defense Minister Ehud Barak, debated and deliberated until the opportunity had passed.

The two former army chiefs, Gantz and Ashkenazi, have since traded in their uniforms for suits and ties to serve as Israel’s foreign and defense ministers, respectively, but they have not changed their minds. They regard an Israeli military operation against Iran carried out without US support and an international umbrella as a last resort. They will be in office at least until June (when a new government is installed by the March 23 elections), and while they are politically marginalized, they still hold a great deal of power by virtue of the law, as well as veto power on government decisions by virtue of their April 2020 coalition agreement with Netanyahu.

Gantz and Ashkenazi know full well that Amidror’s remarks and other recent comments are broad hints that Netanyahu is conveying to Biden. “This is totally unnecessary bravado,” a senior Israeli diplomatic source told Al-Monitor on condition of anonymity. “Netanyahu did not learn a thing from the events of 2014 and 2015, when he clashed head on with President [Barack] Obama, refused to stop and lost many points. Rather than trying to threaten the Americans, Israel should enter into an intimate discourse with them as quickly as possible, share the intelligence with them and try to bridge the gaps between us and them to the extent possible. This is how a responsible leader is supposed to act.”

While this fight between Gantz and Ashkenazi and Netanyahu and his people is still being waged behind the scenes, last week it popped up briefly in the media when Gantz told the Walla news site that he had no intention of letting anyone circumvent the security agencies in discussions with the United States on the Iranian nuclear issue. “I intend to make sure that no one even thinks to interfere with us maintaining Israel’s security with all sorts of tricks and bypassing measures that endanger us,” Gantz said in a thinly veiled message to Netanyahu, who consistently sidelined him in contacts with the Trump administration. Repeating these statements on Twitter, Gantz also alluded to his political rivalry with Netanyahu, saying he intends “to replace those who cannot be trusted to lead honestly and reliably.”

According to Gantz and Ashkenazi's associates, the correct way to go about the issue with the new administration is to immediately convene a team of professionals to work with the Americans, creating a sincere and in-depth dialogue and trying to bridge the gaps between Jerusalem and Washington. These associates argue that taking the opposite tack by explicitly threatening a military strike would only spur the Americans into a hasty return to the previous agreement with Iran in order to preclude unilateral Israeli military action. “That could be a mistake that would haunt us for generations,” the senior Israeli diplomatic source told Al-Monitor.

Against this backdrop, the upcoming March elections will be crucial not only in terms of Netanyahu’s fate and his trial on corruption charges, but also regarding Israel’s role in the renewed contacts with Iran. A Netanyahu victory would renew conflict between the Washington and Jerusalem, this time on steroids. Netanyahu’s replacement after 12 years in office would signal a new era of dialogue and dispute resolution and a return to the way things were.