The meeting in Sochi between Prime Minister Naftali Bennett and Russian President Vladimir Putin covered a large range of strategic and economic issues, focusing on Israeli concerns over Iranian military entrenchment in Syria and the Iran nuclear talks. 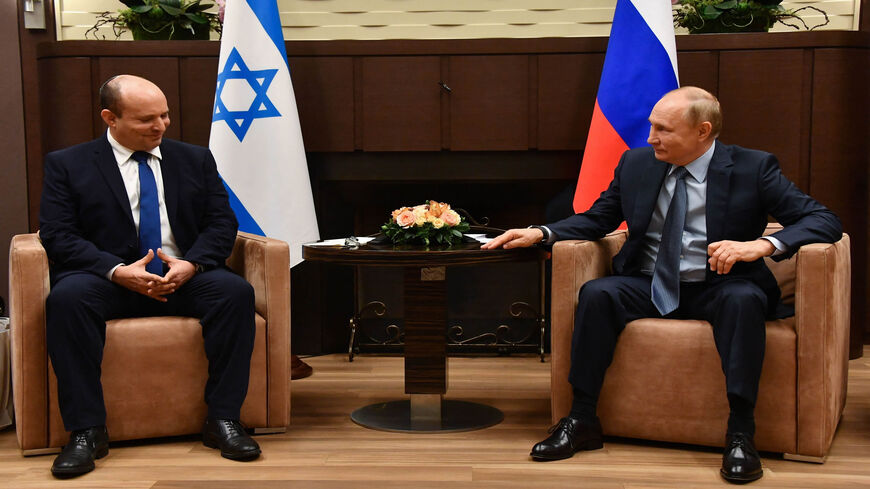 Prime Minister Naftali Bennett met today, Oct. 22, in Sochi with Russian President Vladimir Putin. It was their first talk face-to-face since Bennett took office earlier this year. Bennett arrived to the Russian resort town at 10 a.m. His meeting with Putin was scheduled to take some two hours, but lasted almost five. As a result, Bennett will be staying in Russia until the Sabbath is over tomorrow evening.

Bennett and Putin had spoken at least twice on the phone in recent months — with Putin calling to congratulate Bennett after composing a government, and with Bennett calling Putin recently to discuss regional issues and to congratulate him on his 69th birthday.

Before departing for Russia, Bennett’s office said that talks would focus on several strategic issues, including Israeli concerns over Iranian military entrenchment in Syria, Iran and the Iranian nuclear talks. Reports also noted that Moscow is concerned over alleged Israeli attacks in Syria not being coordinated ahead of time with Russia. Another issue that was expected to come up at the meeting was the legal and financial situation of the Russian Orthodox Church's real estates in Israel.

Bennett's visit marks not only the first face-to-face meeting between the two leaders, but also celebrates 30 years of bilateral diplomatic relations. Israel decided Oct. 18 to enable tourists vaccinated with the Russian Sputnik V coronavirus vaccine to enter Israel, even though the World Health Organization is still accessing the Russian vaccine for emergency use. The decision was perceived in Israel as a diplomatic gesture toward Moscow, and not as a change in the country’s health policy. Following the recent surge in Israel of delta variant cases, Bennett was reconsidering this step, as per Oct. 21 reports.

Speaking in front of cameras before the meeting, Putin said, “There are a lot of problematic topics, but there are also points of contact and opportunities for cooperation, especially in relation to fighting terror.” Putin also noted that Israel is home to a very large Russian-speaking community. He expressed his hope that Bennett's government will continue the good relations forged with the previous Israeli government, and that growth in bilateral trade will continue, including in high-tech.

Bennett said that he and Putin will discuss “the situation in Syria and the efforts to stop Iran’s military nuclear program,” in addition to economic, technological, scientific and cultural cooperation. “Israel has a million ambassadors, a million Russian-speaking Israelis, who are a great contribution to Israel’s culture, as well as the mentality they bring here of hard work, power, strength,” Bennett said. The Israeli premier continued that his meeting with the Russian leader is “based on the deep connection between the two nations. We see you as a real friend of the Jewish people.”

Bennett also referred to the Red Army’s role in defeating Nazi Germany. “As a student of history, one must appreciate the courage in those difficult years for the entire Russian nation,” Bennett stated. He also updated Putin about efforts to construct a museum in Israel commemorating Jewish soldiers who fought in various armies during World War II, including in Russia’s Red Army.

After addressing the cameras, the two leaders then continued their conversation in private. Only a Russian translator on Putin’s side and Housing Minister Ze'ev Elkin on Bennett’s side were present in the room with the leaders for the private part of the talk. In the past, Russian-speaking Elkin accompanied former Prime Minister Benjamin Netanyahu for several meetings he had with Putin, and is considered an expert on Israel-Russia relations.

Apart from Elkin, Bennett was accompanied on his trip by national security adviser Eyal Hulata, Bennett’s diplomatic adviser Shimrit Meir and the government’s military secretary Maj. Gen. Avi Gil. Bennett’s office did not say whether these senior officials were scheduled to have talks with Russian counterparts while in Sochi.