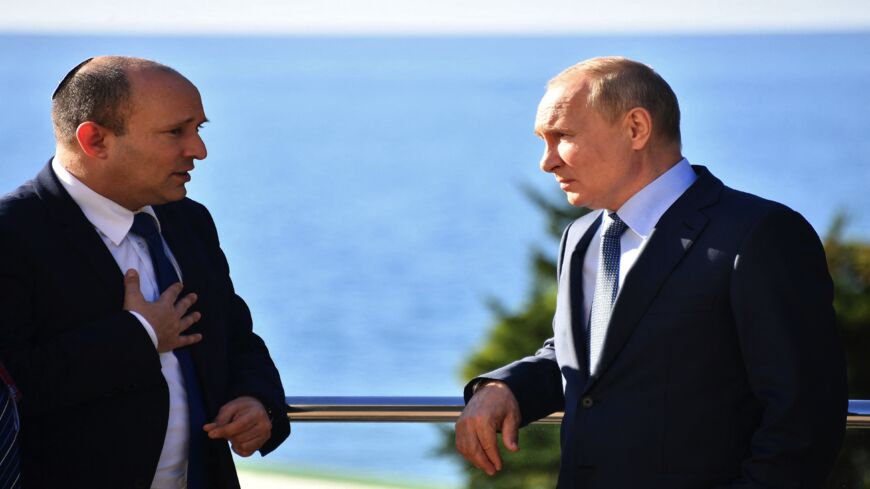 Prime Minister Naftali Bennett spoke Jan. 13 on the phone with Russian President Vladimir Putin. A short statement issued by the Prime Minister’s Office said the leaders discussed security issues and agreed on “continued close cooperation in this area.” The words ‘close cooperation in the area’ likely refer to alleged Israeli air force activity in Syria, where Russia maintains a military presence. Over the past few years, Israel and Syria have established communication channels to coordinate on security issues related to Syrian air space.

Naturally, the statement also addressed the Iranian issue. It said, “Against the backdrop of the nuclear talks in Vienna, the prime minister stressed the importance of a strong and determined stance against Iran’s progress in the nuclear project.”

Since taking office, Bennett has spoken on the phone with Putin a few times and has met him in person once in Sochi on Oct. 22, 2021. The Oct. 22 meeting with Putin was scheduled to take about two hours but eventually lasted almost five, with part of it a private discussion between the leaders (the two men walked together in the garden of the presidential complex toward the seaside). At that meeting, Putin invited Bennett and his wife to visit Saint Petersburg, an invitation he repeated in the Jan. 13 phone call. It should be noted that former Prime Minister Benjamin Netanyahu also invested quite a lot of effort at establishing a friendly rapport with Putin.

Jerusalem and Moscow are definitely not on the same page over the Vienna talks. Still, leaders of both countries are evidently making efforts at establishing friendly personal rapport. While Jerusalem does not expect Moscow to suddenly change its stance on Iran and support sanctions against Tehran, it estimates that keeping an open channel of communication on the issue could prove crucial once the parties to the Vienna talks come closer to a deal.

In that respect, the issue of Syria is more tangible. Dialogue with Russia has a direct impact on the ground. Reports in Israeli press late December said the IDF plans to continue in 2022 its efforts to curb Iranian entrenchment in Syria and curb Iranian ability to transfer weapons and equipment through Syria to its proxies in Lebanon, especially Hezbollah. This could mean more aerial attacks against strategic military targets on Syrian soil. Such military activity would require continued cooperation with Russian forces in the area so as not to accidentally skirmish with Russian jets.

Bennett’s efforts of establishing a personal dialogue with Putin are especially notable compared with his less-than-often contacts with other world leaders. Out of the P5+1 countries participating in the Vienna talks with Iran, Bennett has been mostly in contact with President Joe Biden and Putin, though contacts with the US president are less smooth than could have been expected. On Dec. 21 it was reported that Biden did not call Bennett for over three weeks despite a request from Jerusalem for such a conversation.

As for the Europeans, Bennett met with British Prime Minister Boris Johnson and French President Emmanuel Macron during the COP21 climate summit in Glasgow at the beginning of November. On Jan. 4, Bennett spoke with Johnson over the phone about several issues, including the Vienna talks. The two countries are planning a joint innovation summit in the UK later this year.

Relations with France seem to be more complicated on the leaders’ level. Foreign Minister Yair Lapid has a personal and friendly relationship with Macron, which could explain why Bennett is making little effort at communicating with Paris. He might prefer leaving Macron for Lapid. The two men (Macron and Lapid) last spoke on the phone Jan. 8 about the ongoing nuclear talks in Vienna. Still, it is curious why Bennett did not call Macron to congratulate him over France taking over the presidency of the European Union.