Is Ankara capitulating to or allowing lira’s depreciation?

Turkey’s central bank shocks financial markets with a bigger-than-expected rate cut, overriding concerns over the slump of the Turkish lira and its bruising impact on the economy. 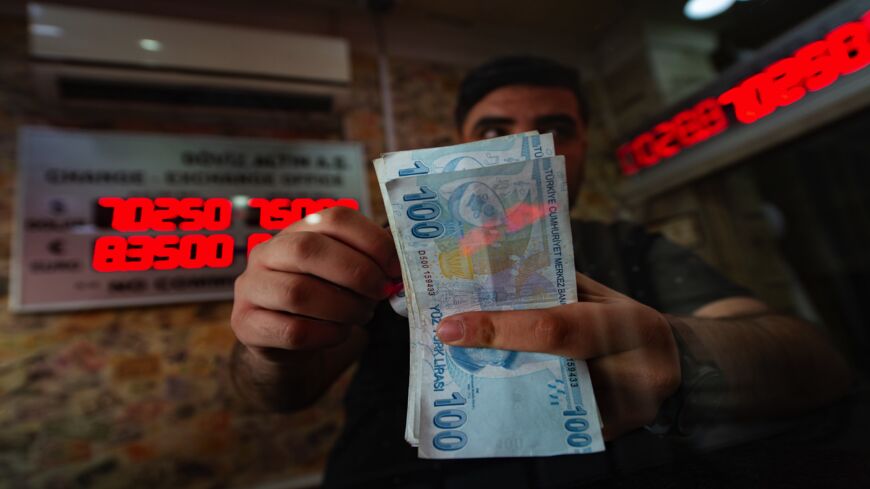 Turkey’s central bank cut its policy rate by a staggering 200 basis points Thursday, sending the embattled Turkish lira to a new all-time low and raising the specter of deeper economic turmoil in the country.

The bank’s monetary policy committee lowered its key one-week repo rate to 16% from 18%, heeding President Recep Tayyip Erdogan’s pressure for lower interest rates despite an annual inflation just shy of 20%. The move followed a 100-basis-point reduction in September and the dismissal of senior central bankers last week, which had already caused the lira to tumble.

The currency, which has lost about 20% of its value this year, dropped as much as 2.9% to a record low of 9.48 versus the dollar Thursday afternoon after the bank announced the cut.

Many now wonder whether Ankara has tacitly resigned to further depreciation of the currency despite its bruising impact on the fragile, import-reliant Turkish economy. Conventional wisdom dictates that Ankara should rein in the increase of foreign exchange prices as it fuels cost-push inflation and heightens the cost of rolling over foreign debt and other public liabilities denominated in hard currency.

Taking hints from the government’s medium-term economic program, some observers and economic actors have come to argue that Ankara is knowingly allowing the lira to cheapen. Others, however, believe that Ankara is in a state of capitulation, lacking the means to defend the currency. With Erdogan bent on lowering interest rates to stimulate growth and the central bank’s foreign reserves depleted, Ankara has no option but to acquiesce to the slump of the lira, they say, warning of a continued rise in inflation and deeper economic woes.

The president held a surprise meeting with Turkish Central Bank Governor Sahap Kavcioglu Oct. 13, after which he dismissed three members of the bank’s monetary policy committee. One of them had attended all of the committee’s meetings this year except the one in September in which a rate cut was decided. The other two were deputy governors who were reportedly opposed to rate cuts.

It was Kavcioglu who requested the dismissals, which ended speculation that the governor himself might be on the line. The sackings had already prompted many market watchers to revise their forecasts on a new rate cut from 50 basis points to 100 basis points — hence the shock of Thursday’s decision to cut the rate by twice as much as expected.

Following the dismissal of the three central bankers, the lira had fallen as much as 1.1% to 9.19 against the dollar on Oct. 14 alone. The freefall continued in the ensuing days, with the currency dropping to more than 9.3 per dollar. Anticipation of a new rate cut despite the gloomy inflation outlook had already pushed Turkey’s risk premium up, threatening to fuel the flight of foreign investors and a fresh dollarization wave, with Turks scrambling to preserve the value of their savings.

Central bank data show that foreign investors pulled more than $600 million from the Turkish Stock Exchange in the four weeks to Oct. 8. The flight of foreign money is expected to intensify through October.

Given all those adverse developments, why would Ankara withhold a move to prop up the lira? Those who see the inaction as deliberate argue that the value of the lira remains within the limits of projections in the government’s medium-term economic program. The program does not contain an overt projection of the lira’s value, but the projected gross domestic product is given both in liras and dollars, which shows that the average exchange rate the government projects in 2021 is 8.3 liras per dollar. In the first nine and a half months of the year, the average stands at 8.15 liras per dollar, which forms the basis of arguments that Ankara is resigned to a further depreciation of the lira this year. Even if the daily pace of depreciation seen in October continues by the year-end, the price of the greenback would reach 10.91 liras and bring the annual average to 8.6 liras, which would still be a not-so-big deviation from the program.

Yet worries remain that Ankara lacks the means to respond to a slump beyond its projections, not to mention the havoc that the existing foreign exchange prices are already wreaking on the economy. The path of raising interest rates to defend the lira is blocked by Erdogan, and the central bank’s foreign reserves are too low to allow for currency interventions on the market.

The argument that Ankara is knowingly letting the lira slide rests also on the notion that a cheaper currency is good for exports. A cheaper lira, the argument goes, would help increase hard currency revenues from both exports and tourism, curb imports and thus narrow the country’s current account deficit, which would eventually bring down foreign exchange prices and quell inflation. This argument, however, ignores the Turkish exporters’ dependency on imported inputs. Even leading exporters such as the textile and food sectors depend to some extent on imported materials, which become more expensive the more the lira cheapens.

Turkey had a foreign trade deficit of nearly $30 billion in the first eight months of the year, with exports totaling about $140 billion and imports some $170 billion. Moreover, global energy prices are on the rise, aggravating energy costs for Turkey, which is heavily reliant also on imported oil and gas. A similar uptick in industrial commodity prices has been adding to Turkey’s importation bill, while its exports have cheapened. In August, for instance, the unit prices of exported goods were 13% lower than the unit prices of imported ones, official data show.

Ultimately, the soaring prices are what matters the most for the person on the street. Public servants, private sector employees and pensioners who make the backbone of the populace have been steadily losing purchasing power, with pay raises lagging behind the pace of inflation. They are witness to how the government’s actions have fallen short of defending the lira to curb the surge in foreign exchange prices, which is the main factor stoking inflation. The anger of the masses is likely to grow in the coming months as their livelihood woes aggravate during the winter.