In a midnight decree, President Recep Tayyip Erdogan rid the central bank of key bureaucrats who opposed his calls for lower interest rates ahead of next Thursday’s key meeting. 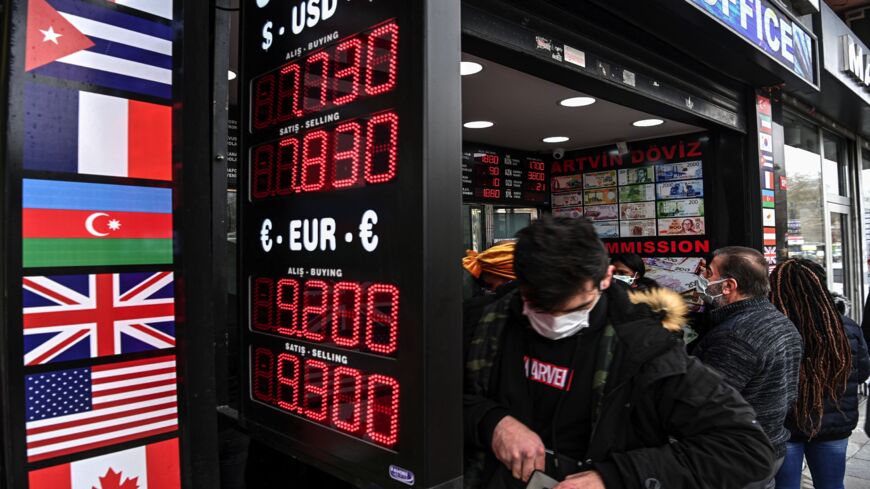 Customers wait in front of a currency exchange agency as a screen shows rates near the Grand Bazaar, in Istanbul, on March 22, 2021. - OZAN KOSE/AFP via Getty Images

The dismissals were interpreted as a means to clear the opposition before the bank’s Monetary Policy Committee (MPC) scheduled for Oct. 21 where further rate cuts, as stubbornly demanded by President Recep Tayyip Erdogan, are likely to come on the agenda. Erdogan declared in August that interest rates would go down in the fall, insisting that lowering interest rates would combat inflation.

With the annual rate of inflation jumping over policy rate at nearly 20% and public outrage at the high cost of food and accommodation, Erdogan holds on to the view that lower interest rates would stimulate the economy as well as boost credit and exports. For many pundits, the cuts are not worth the fragilities they cause, primarily by weakening the lira. Nonetheless, on Sept. 23, the central bank and its newish governor, Sahap Kavcioglu, a former party man and fourth central bank governor in two years, bowed to the president by trimming the bank’s policy rate by 100 basis points to 18%.

“Following the 100 basis-point rate cut on Sept. 23 meeting, we can now except a further one or two hundred basis-point cut in the upcoming one,” said Ugur Gurses, an economist who began his career at the central bank. “What has happened displays that the central bank has become an extremely politicized area. Kavcioglu, who came to this post with the mission of lowering interest rates, clearly faced opposition from his colleagues and wanted to clear the path and appealed to the president for a reshuffle.”

Ankara insiders say that two of the sacked men, Ugur Namik Kucuk and professor Abdullah Yavas, had been vocal against the central bank’s trimming its benchmark interest rate — a decision that has sent the Turkish lira tumbling 1.5% against the dollar and hitting 8.80. Kucuk, a Rome-trained economist who was the go-to person of international investors, was reportedly the only one of the seven-person MPC to vote against the decision. A banker in Ankara who requested anonymity said that the disagreement between the two men went beyond interest rates. Kucuk, a key actor during the term of Kavcioglu’s hawkish predecessor, Naci Agbal, opposed Kavcioglu on a number of issues from internal appointments to selling the bank’s foreign currency reserves.

Yavas, a US-based academic who has long been a member of the MPC and was described by the Ankara banker as “the memory of the committee,” had been absent from the September meeting, saying he had contacted COVID-19 in the United States where he lives and teaches.

The third person to be removed with the late-night decree was Semih Tumen, who was named deputy governor in May. Tumen previously served as the director-general of economic research at the central bank from 2016 to 2018 and was also an adviser to the human resources office of the Turkish presidency. Earlier this month, Tumen was pointed by the Financial Times and other international media as a possible successor to Kavcioglu.

Following the unexpected — and unexplained — sackings that bruised the credibility of the bank further, the Turkish lira plunged to 9.19 against the dollar Thursday morning. It finished the day in the Turkish markets around 9.17.

Wednesday’s late-night decree marked the last straw in a turbulent week for the Turkish lira, which has shed 19% in 2021. The fragile currency hit 8.93 on Oct. 8 due to concerns over the credibility of the monetary policy after Reuters reported that Erdogan had lost confidence in Kavcioglu, a former Justice and Development Party deputy from Bayburt who succeeded three others swiftly hired and fired by the president since mid-2019.

The article, citing three unnamed sources, said Erdogan had been angered that the governor had not implemented the rate cut sooner. Ankara insiders speculated that the president wanted a more substantial cut. Erdogan’s information tsar, Fahrettin Altun, denied the claims of Kavcioglu’s dismissal with very strong language, which helped the lira to recover slightly.

Fake news used to be a problem on social media.

It seems that the mainstream media, too, suffers from the same issue now.

That even major organizations spread such lies is deeply concerning.

But neither Altun’s fervent denial nor a high-profile appearance by Kavcioglu at a meeting with the Parliamentary Finance and Monetary Commission fully stopped the rumors that the governor might be on his way out or stop the lira from further slide. The lira started the week with a new record low level of 8.9750 against the dollar and continued its slip through Wednesday, extending its losses to almost 5% against the dollar since the rate cut on Sept. 23.

In a move to end the rumors of Kavcioglu’s dismissal, Erdogan and the governor posed grimly before the cameras Wednesday night after a meeting at the presidential palace.

Though there were no details of their talks except to say that it had been “positive,” what they discussed became clearer late at night, with the dismissals published at the Official Gazette six hours later.

According to the presidential decree, Kucuk will be replaced by Taha Cakmak, a deputy chairman at Turkey's banking watchdog, BDDK. Yusuf Tuna, a professor and an ex-board member at BDDK, will replace Yavas at the Monetary Policy Committee.

“It is safe to assume that they will back up Erdogan and Kavcioglu’s policies on rate cuts,” Gurses said.

The dismissals drew criticism from the opposition parties. DEVA Party Chair Ali Babacan, who headed Turkey’s economy between 2001-2015 except for two years when he served as foreign minister, said that Erdogan went too far with his constant reshuffling of the central bank. “An institution whose independence is of key importance has become a toy in the hands of a single person,” he tweeted. “Stop with all these comings and goings. Simply appoint yourself at the head of the central bank, as you have done with the Sovereign Wealth Fund.”

Gursel Tekin, deputy chair of the opposition Republican People’s Party, said that the faulted monetary policies of the government had left the lira weak. “And now the government is trying to portray the exchange offices as the culprit for the rise of the dollar against the lira,” he tweeted.

The reference is to a new regulation under which the exchange offices would be obliged to record the Turkish identity card or passport numbers of their clients. The money changers will also make a record of the relevant transaction, its date/hour and the amount exchanged. The recent move comes as Turks have been buying foreign currencies in the face of a weakening currency and increasing inflation figures. The Turkish treasury said that the move had nothing to do with exchange rates but simply aimed to control and stop irregular transactions.