Signs of life at an extraordinary meeting of senior Middle East officials; also, updates from our correspondents on Israel, West Bank, UAE, Turkey, Egypt, Iraq … and more … all in about 1,400 words! 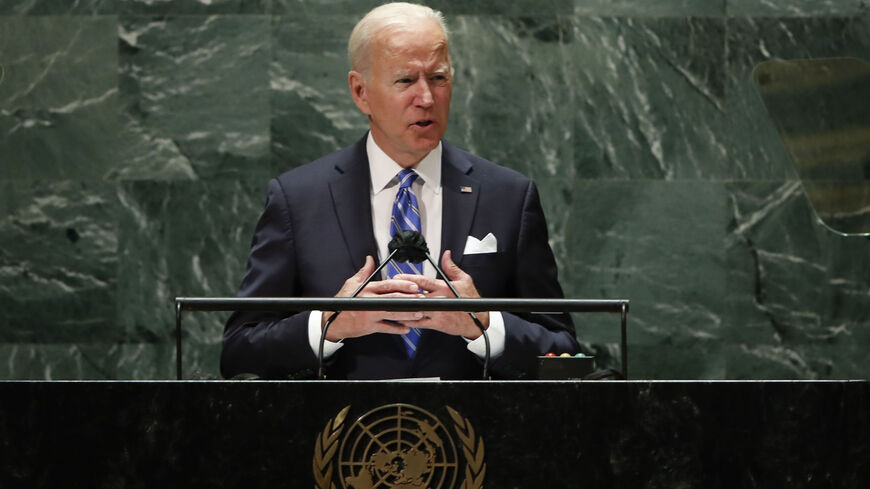 US President Joe Biden addresses the 76th Session of the UN General Assembly in New York on Sept. 21, 2021. - EDUARDO MUNOZ/POOL/AFP via Getty Images

Final Take: Our take for the past few months has been that Raisi has compelling economic, political and diplomatic incentives to re-enter nuclear negotiations and get sanctions lifted. This week, Bijan Khajehpour explains why Iran’s joining the Shanghai Cooperation Organization (SCO) won’t provide the economic windfall Tehran is hyping. The key to Iran’s economic future remains sanctions relief, and the Biden administration alone holds that card.

Following the escape and recapture of six inmates from an Israeli prison earlier this month, the Palestinian territories have witnessed near-daily confrontations with the Israeli army. The mood is especially tense in the northern West Bank city of Jenin, where the remaining two inmates were captured during an Israeli raid on Sunday. Ahmad Melhem reports that Palestinians in Jenin have targeted a nearby Israeli-run checkpoint with bullets and homemade bombs.

Israel is celebrating the end of the two-week manhunt, and there is relief that what could have been a brutal siege of the Jenin refugee camp has been avoided, writes Ben Caspit. “If the first half of this drama seemed like Prime Minister Naftali Bennett’s worst nightmare, its second half and denouement was a dream come true for the premier and his fragile coalition government,” he says.

Hundreds of Israeli Jews are expected to ascend Jerusalem’s Temple Mount this week to observe the Sukkot holiday, and Israel has beefed up security at the contentious Jerusalem compound in preparation.

The Temple Mount is a frequent flashpoint in the Palestinian-Israeli conflict, revered by both Muslims and Jews.

Despite ultra-Orthodox rabbis saying entry is forbidden until the messiah comes, Israelis are flocking to the holy site in record numbers this year, explains Danny Zaken, with the potential for another round of confrontations.

Under the newly signed framework for cooperation, the UNRWA must certify that US taxpayer dollars don’t end up in the hands of Palestinian refugees who engage in terrorism.

The agency is also required to check the names of its employees and beneficiaries against a UN sanctions list.

A leader for Islamic Jihad rejected the conditions, claiming in an interview with Al-Monitor they allow the United States and Israel to surveil Palestinian refugees.

The UAE, which was one of only three countries to maintain diplomatic ties with the insurgent group from 1996 to 2001, is unlikely to extend formal diplomatic recognition this time around.

But as Samuel Ramani argues, Abu Dhabi can instead opt for pragmatic engagement with the Taliban. By involving itself in Afghanistan’s future, the UAE could strengthen its partnerships with India and Pakistan, as well as bolster its standing as a major humanitarian aid donor.

Amberin Zaman says Turkey’s muscle-flexing in Sulaimaniyah could boost the popularity of Lahur Talabani, the ousted co-chair of the Patriotic Union of Kurdistan party who is a vocal critic of the rival Kurdistan Democratic Party of Iraq’s close relations with Ankara.

Elsewhere in Iraq, Shelly Kittleson reports on how Sunni Arabs from eastern Syria and western Iraq are increasingly turning to Iraq’s Kurdistan Region as a place of refuge from sectarian armed groups. “Attacks on Erbil by Iran-linked groups now seem to be bringing Iraq’s Kurds and Sunni Arabs even closer together in ways that would have been unexpected during and immediately following the years under Saddam Hussein,” she writes.

After 15 years of renovation work, Egypt has finally reopened the southern cemetery of King Djoser. Located in the Saqqara region, south of Cairo, the cemetery contains the tomb of the Egyptian pharaoh from the Third Dynasty — but not his body. King Djoser’s remains are believed to be buried nearby inside the 5,000-year-old Step Pyramid. The unveiling comes as Egypt’s normally vibrant tourism industry recovers from the coronavirus pandemic’s effect on travel. As Baher al-Kady writes, the North African country hopes to lure international visitors this year with the upcoming Grand Egyptian Museum and the 100th anniversary of the discovery of King Tutankhamun’s tomb.

What We’re Listening To: Israel’s Bennett profile in TIME like ‘science fiction’

Ben Caspit discusses the first 100 days of the Bennett-Lapid government with Dana Weiss, a diplomatic correspondent for Israel’s Channel 12. The pair also talk about Prime Minister Naftali Bennett's inclusion in TIME Magazine's roundup of the world’s most influential people — and more notably, Arab politician Mansour Abbas’ endorsement of the right-wing leader. “It’s almost science fiction to think that this could have happened,” Weiss said. Listen here to Ben’s podcast with Weiss.

Renowned Middle East expert Gilles Kepel will next week debut his new Al-Monitor podcast, “Reading the Middle East with Gilles Kepel.” Tune in each week for Kepel’s interviews with authors and thought leaders shaping how we think about the region. His first guest is Egyptian novelist Alaa Al Aswany, whose book “The Republic of False Truths” is a fictionalized account of the Arab Spring uprising in Egypt.