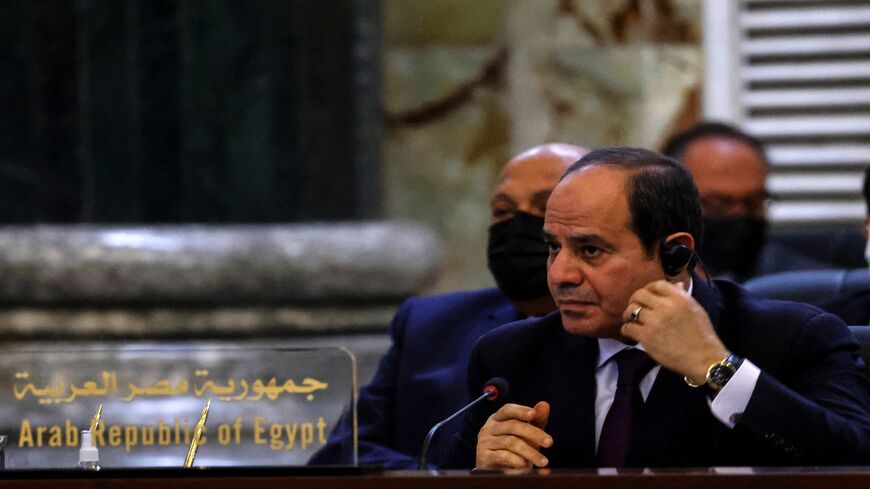 Half steps. The Biden administration is planning to send $170 million in military aid to Egypt that Congress has conditioned on improvements in Cairo’s human rights record. That’s only slightly more than half the $300 million Congress had appropriated. The compromise, Elizabeth Hagedorn reports, has not appeased activists and some Democrats who wanted Washington to take a tougher approach on conditioning aid.

Fahmy: US assistance a win-win. "Constructive engagement is a better approach than attempting to use assistance as a weapon or the withholding of access to facilities," former Egyptian Foreign Minister Nabil Fahmy tells Al-Monitor, "especially because the overwhelming majority in both countries aspire for a centrist moderate political center of gravity and peace in the Middle East."

And it’s a two-way street, not an act of charity, says Fahmy, who served as Egypt’s ambassador to the United States from 1999-2008 and is the author of "Egypt’s Diplomacy in War, Peace and Transition."

"Egypt has benefited from US assistance in reforming its economic policies and strengthening its markets, as well as in the sustained enhancement of its strategic military capacities," adds Fahmy, founding dean of the School of Global Affairs and Public Policy at the American University in Cairo. "The assistance has also served US interests as a catalyst for expansion of market forces, as well as ensuring security and military cooperation including invaluable access to facilities and real-time flyovers" by US military aircraft that use Egyptian airspace on missions in the region.

In addition, Fahmy points out, "Egypt was the trailblazer for Arab Israeli peace efforts and brought an indispensable Arab component to the US-led international coalition force that liberated Kuwait in 1991."

Whom do you call? No doubt human rights have been and will continue to be a scratchy talking point in the multifaceted US-Egyptian dialogue. But the story doesn’t end there. The Biden administration had Egyptian President Abdel Fattah al-Sisi on the "do not call list" until hostilities erupted between Israel and Hamas in May. Then, once again, an Egyptian president found himself on the White House’s speed dial. US President Joe Biden expressed "sincere gratitude" for Sisi’s brokering the cease-fire between Israel and Hamas. And Israel, for its part, showed its commitment to deepening already strong security ties with Egypt when Israeli Prime Minister Naftali Bennett met with Sisi in Egypt this week — the first such visit by an Israeli premier in over a decade (see below).

A broad agenda. In some ways, US-Egyptian ties are a return to a prior-era business-as-usual, with tension on human rights and recognition of Egypt’s pivotal role in regional affairs. Congress is dug in on conditions on assistance, and despite Sisi’s announcement of a national human rights strategy, the focus in Washington will be on deeds and not words. That said, Egypt will continue to be a go-to regional partner of the United States. Foreign Minister Sameh Shoukry told Bloomberg TV the United States has a vital role in the region, which Egypt supports. In addition to Gaza, the Biden administration has praised the "strengthening of regional economic and security ties between Egypt, Iraq and Jordan," and Cairo as a key partner in supporting stability in Libya.

Speaking of resurgent Egyptian influence, Israeli Prime Minister Naftali Bennett visited with Egyptian President Abdel Fattah al-Sisi on Monday in what marked the first official visit by an Israeli premier to Egypt in more than a decade. During their summit in the Red Sea resort town of Sharm al-Sheikh, the pair reportedly discussed tensions in Gaza, relations with the Palestinian Authority, Iran’s behavior and security cooperation. Mazal Mualem writes that the reaction to the meeting in Israel underscored the divides in the country’s fragile coalition government. Left-wing ministers were among the first to congratulate Bennett, but right-leaning members of his government, including Justice Minister Gideon Saar, were conspicuously silent.

Ben Caspit reports that the Sept. 13 summit set the stage for “a last-ditch mediation attempt” between Israel and Hamas that would further cement Egypt’s role as a powerbroker. The meeting came a day after Bennett’s foreign minister, Yair Lapid, unveiled his vision for economic prosperity in the impoverished Gaza Strip. The plans for the Hamas-run enclave are noteworthy given Bennett’s hawkish positions on Gaza while in the Knesset. Now “in the hot seat, Bennett is learning firsthand the endless complexity of the standoff with Gaza,” Caspit writes.

Egypt is gearing up to open what it says will be the region’s largest coronavirus vaccine production factory, an announcement that comes amid a laggardly pace of inoculations in the North African country. Since launching its COVID-19 vaccination campaign in January, Egypt has administered about 10.4 million doses — enough to fully vaccinate just over 5% of the population. As Rasha Mahmoud reports, Egyptian health officials hope that by ramping up local vaccine production, they can prevent a fourth wave at home while also exporting vaccines to neighboring African countries. In cooperation with Chinese biopharmaceutical company Sinovac, the Egyptian factory outside Cairo is expected to produce 80 million doses over the next six months.

The last time the Taliban was in power, Saudi Arabia was one of just three countries to recognize the Islamist government. This time around, the kingdom is seeking to expand its influence in Afghanistan to counter that of Iran’s. In a sign of renewed interest, the kingdom sent former Saudi intelligence chief Prince Turki al-Faisal to meet with Taliban officials days before the group announced its interim government. Sabena Siddiqui examines Riyadh’s role in Afghanistan following the Taliban takeover and whether it can compete for influence with regional rivals Iran and Qatar.

Hayat Tahrir al-Sham (HTS) has done away with its repressive security squad, Al-Falah, which was formed in May 2020 to prevent men and women from mixing in public and impose fines for music and smoking in the northwestern Syrian province of Idlib.  But in its place, the Syrian jihadi group has unveiled a new “moral police,” which Mohammed Hardan writes is meant to appease the more extreme wing of HTS. As one researcher put it, ending the work of Al-Falah and creating the moral police could be little more than a name change.

Plus, Hardan breaks down what to make of HTS leader Abu Mohammed al-Golani’s recent interview in which he promised not to abandon Syria’s foreign fighters.

Human rights groups are condemning the PA's ongoing trials of activists whom Ramallah prosecutors have charged with defamation, gathering illegally and inciting sectarian strife, Ahmed Melhem writes from the West Bank. The group was detained in August after protesting the death in custody of PA critic Nizar Banat. Palestinian officials, meanwhile, have sought to calm the situation.

The trials come as a coalition of Palestinian NGOs is condemning corruption in the West Bank, releasing a 10-point manifesto last week that calls for a “more honest governance structure” and inclusive national dialogue. “The calls for reform appear to have had some success,” Daoud Kuttab writes. President Mahmoud Abbas, now in his 12th year in office, met on Thursday with civil society leaders who handed him a list of demands.

One More Thing: Assyrian Church of the East gets new patriarch

The Assyrian Church of the East inaugurated a new patriarch in the northern Iraqi city of Erbil on Monday. Mar Awa Royel is the first American-born bishop of the ancient church and only the ninth patriarch since 1780. He’ll now be based in Iraq, where the Assyrian, Chaldean and Syriac population has dwindled from about 1.5 million in 2003 to below 200,000 today. Listen to the new patriarch speak with Joe Snell about the role he serves within the larger Assyrian community, some of the challenges facing Iraqi Christians and the debate over whether to move the patriarchal seat outside of Iraq.

Renowned French scholar Gilles Kepel, one of Europe's leading Middle East experts, discusses his new book, "The Pandemic and the Prophet," on this week’s "On the Middle East" podcast (link here). And there’s more: Gilles also previews a new Al-Monitor podcast, “Reading the Middle East with Gilles Kepel.” Every month Gilles will interview authors from across the region. His first guest in two weeks will be Egyptian novelist Alaa Al Aswany, whose book "The Republic of False Truths" is newly translated into English (see below).

What We’re Reading: The Republic of False Truths

Alaa Al Aswany’s "The Republic of False Truths" is a fictionalized account of Egypt’s Arab Spring uprising, which overthrew longtime Egyptian President Hosni Mubarak. Aswany, who participated in the Tahrir Square protests and civil disobedience, depicts the 18-day uprising through the eyes of a pious military general, an out-of-work actor and a young teacher.