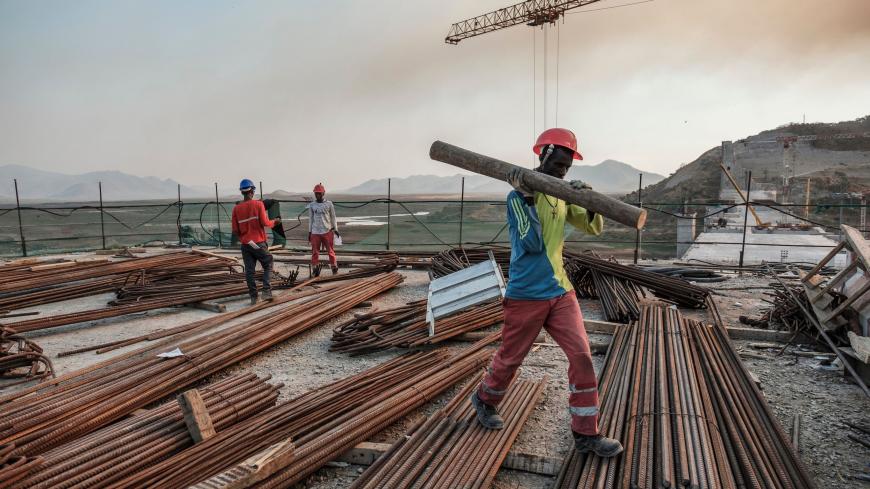 A worker walks with a piece of wood on his shoulder at the Grand Ethiopian Renaissance Dam (GERD), near Guba in Ethiopia, on Dec. 26, 2019. - EDUARDO SOTERAS/AFP via Getty Images

Motaz Zahran, Egypt’s ambassador to the United States, welcomed US and international mediation of a dangerous dispute over the Nile’s waters between Egypt and its upriver neighbor, Ethiopia. Zahran said Addis Ababa is showing "no political will whatsoever" in reaching agreement on the Grand Ethiopian Renaissance Dam (GERD), which is why US and international intervention is needed, and welcome, to break the deadlock.

• Why the US-Egyptian relationship "transcends local politics" in both countries.

• The Egyptian economy’s resilience during the COVID-19 pandemic (see below).

• Egypt’s support for the governments of Sudan and Iraq.

• Turkey’s "extremely destructive role" in Libya, which is creating "another Syria."

Listen: Check out my conversation with Zahran here on the latest episode of the "On the Middle East" podcast.

Michael Oren, Israel’s former ambassador to the United States, is absolutely fine with Israel Defense Forces (IDF) chief Aviv Kochavi speaking out against the United States returning to the nuclear deal with Iran and saying that he has, as a contingency, "instructed the IDF to prepare a number of operational plans in addition to those already in place," as Ben Caspit reports.

"War footing." “Israel needs to present a ‘united front’ in opposition to the Iran deal,” Oren told Caspit in this week’s "On Israel" podcast, adding that if the United States and Iran recommit to the Joint Comprehensive Plan of Action, "We will be on a war footing."

Meanwhile, Iranian Foreign Minister Mohammad Javad Zarif, in an interview with CNN’s Christiane Amanpour on Feb. 1, encouraged the European Union to “choreograph” a return of both Iran and the United States to the Iran deal, as we report here.

"Marked friction." Oren described Rob Malley, who has been appointed US envoy for Iran, as "intensely intelligent” and capable, and also noted that Malley has had some "marked friction" with Israel. Rob’s appointment "is not likely in any way to dispel our concerns or ease our anxieties" about the Iran deal, Oren told Caspit.

Elizabeth Hagedorn has the background here on the over 200 progressives and foreign policy experts and former officials who have come to Malley’s defense from detractors’ allegations that he is soft on Iran.

“I want women to not only practice the sport but also make it part of their lives as a means of defending themselves in any situation,” said Aya Saied, 29, who fights by the name of Sheklesa, who is the first and only woman on Egypt’s first mixed martial arts "Top Team."

Cairo is notorious for cases of harassment of women. A 2017 Thomson Reuters Foundation poll found Cairo to be the most dangerous big city for women, and a United Nations' survey in 2013 found that over 99.3% of women had experienced harassment in Egypt, Farouk reports.

Menna Farouk has the report here from Cairo.

In case you missed it: UN Syria envoy says, ‘We can’t continue like this’

UN Special Envoy for Syria Geir Pedersen expressed his disappointment to the "small body" of the Syria Constitutional Committee, saying, "We can’t continue like this."

The latest weeklong meeting of the group in Geneva revealed a process that appears to be going nowhere, absent a new understanding of how to proceed. The Constitutional Committee, which is tasked with drawing up a new constitution, has 150 members, equally divided among representatives of the government, opposition and civil society. The small group has 45 members, drawn from the 150.

You can read Pedersen’s remarks to the press here, and my September 2019 interview with Pedersen here.

Last month’s IMF report on Egypt chronicles a success story, so far, in the Egyptian government’s efforts to mitigate the negative economic consequences of the COVID-19 pandemic. "Measures taken to address the health and social needs and support the sectors most directly affected by the crisis appear to have helped mitigate the impact of the shock," says the report, and Egypt’s economy is expected to grow, rather than contract. You can read it here.