Some 40 Palestinians were injured when Israeli troops fired on a crowd of protesters attempting to breach the Gaza perimeter fence. 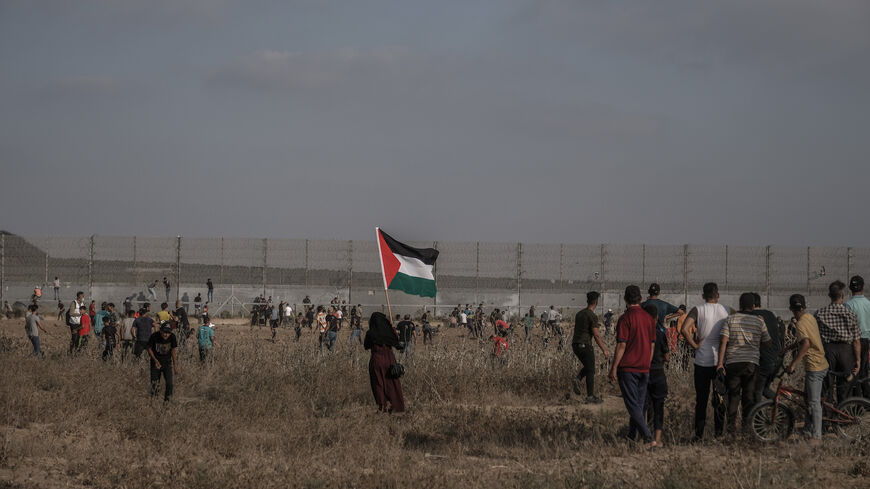 Palestinian protesters take part in a demonstration at the border fence with Israel, denouncing the Israeli siege of the Gaza Strip, during a protest to mark the 52nd anniversary of the burning of Al-Aqsa Mosque on Aug. 21, 2021, in Gaza City, Gaza. - Fatima Shbair/Getty Images

A Gaza man injured in violent clashes with Israeli troops over the weekend was pronounced dead Wednesday, the Hamas-run Health Ministry said.

Osama Khaled Deaih, 32, was shot by Israeli forces on Saturday as hundreds of Palestinians gathered to protest the Israeli-Egyptian blockade on the Gaza Strip. After a group of protesters began climbing the border fencing as well as throwing rocks and explosives, the Israeli military said it used tear gas and live rounds on the crowd.

Forty-one Palestinians were injured in the gunfire, including a 13-year-old boy with a gunshot wound to the head, Palestinian health officials said.

Israeli border guard Barel Hadaria Shmueli was shot in the head by a Palestinian rioter and as of Wednesday, remained at a Beersheba hospital in critical condition. Video from the scene appears to show a Palestinian man shooting through a small opening in the concrete border wall that Shmueli was using as a sniper position.

Israel responded to the violence by carrying out airstrikes in the Gaza Strip on Sunday, striking “four weapons and storage manufacturing sites” and deploying additional troops to the Gaza border. There were no immediate reports of casualties from Israel’s aerial attacks.

Israeli Defense Minister Benny Gantz told Channel 13 that Israel “will not accept any harm to our forces. The incidents at the fence are grave and we will respond to them.”

The weekend’s violence is among the bloodiest since the 11-day conflict between Hamas and Israel in May. Israel’s air campaign in the Gaza Strip killed more than 250 Palestinians, including 67 children and 39 women, Gaza health officials said. The militants’ rocket fire killed 12 civilians in Israel, including two children, and one soldier.

Despite a fragile cease-fire brokered by Egypt, Palestinian militant groups have continued to send fire-laden balloons across the border into southern Israel. On Aug. 16, for the first time since the May conflict, Gaza militants fired rockets in Israel’s direction. One was intercepted by the Iron Dome missile defense system and the other landed in Gaza.

Egypt is trying to negotiate a more permanent truce between the two sides. In response to the latest unrest, Cairo closed its Rafah border crossing with the Gaza Strip on Monday.