Israel-Gaza border heats up despite agreement on Qatari aid

The day after Defense Minister Benny Gantz announced an agreement had been reached on getting Qatari aid into Gaza, Palestinians stormed the security fence and seriously wounded an Israeli soldier. 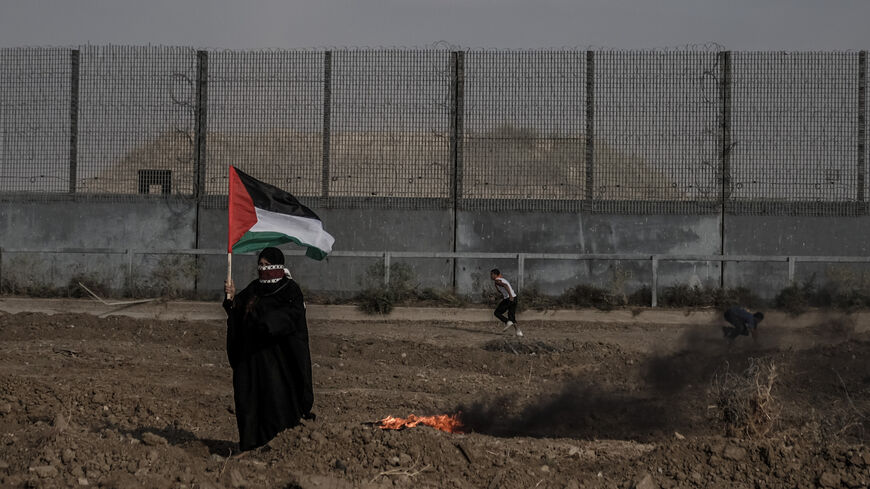 Palestinian protesters demonstrate at the border fence with Israel, denouncing the Israeli siege of the Palestinian strip during a demonstration to mark the 52nd anniversary of the burning of Al-Aqsa Mosque on Aug. 21, 2021, in Gaza City, Gaza. - Fatima Shbair/Getty Images

Israel’s government showed some cautious optimism over Gaza last Friday. Defense Minister Benny Gantz said Aug. 20, “We decided to change and improve the mechanism of providing Qatari humanitarian aid to residents of the Strip to ensure that the money reaches those that really need it.” Gantz clarified that Israel will supervise the transfer of the money to Gaza and said that he had also held talks with Qatari officials in the lead-up to this decision. The Israeli press reported later that Gantz had quietly met with a senior Qatari official in a third country to discuss the issue.

The issue of Qatari aid to Gaza has been on the new government’s agenda since it came to power. In fact, it has been on the Israeli agenda since the 11-day round of violence on the Gaza border last May. Prime Minister Naftali Bennett and Gantz both made it clear that the old process of cash deliveries into the Strip in suitcases could not go on, and that a new mechanism must be put in place to ensure that the money reaches the needy and is not used for terror purposes. The United Nations and also Qatar apparently agreed that a new mechanism should be established. But getting everyone, including Hamas, to agree on parameters for a new framework was not so easy.

The announcement of a solution marked a significant step in reaching out to Gaza residents, who have not received any aid money for the past four months. Qatar’s envoy to the region Mohammad al-Emadi explained that the United Nations will channel a total of $10 million each month, through the UN and UN World Food Program, to be distributed to 100,000 impoverished Gazan families. The majority of the money would be donated by Qatar.

The humanitarian crisis in Gaza has deteriorated in recent months amid the global economic crisis and the coronavirus pandemic. On Aug. 16, two rockets were fired at Israel from Gaza in the first incident of its kind since Israel’s assault in May. Hamas had indicated that if the Qatari money issue were not resolved, it would escalate the situation. But after the rockets were fired, reports emerged that the group had claimed it was not responsible for the incident and that it had arrested the perpetrators.

The cautious Israeli optimism did not last long. On Aug. 22, riots broke out on the Gaza-Israel fence. Rioters came very close to the barrier and one of them shot an Israeli soldier on the other side, seriously injuring him. According to reports, 21-year-old Barel Shmueli was shot by a Palestinian. The Israel Defense Forces explained that its troops did not shoot at the rioters so as to avoid hitting civilians. It is now investigating the incident.

Shortly after the incident, Egypt closed its Rafah crossing into Gaza, fearing escalation. On Aug. 22, the Palestinian press reported that several incendiary balloons had been launched from Gaza toward Israel. It now seems that at least nine fires were sparked in the south of Israel by the balloons.