Behind the seemingly idyllic partnership between Prime Minister Naftali Bennett and Alternate Prime Minister Yair Lapid, tensions are seething and competition is already on its way. 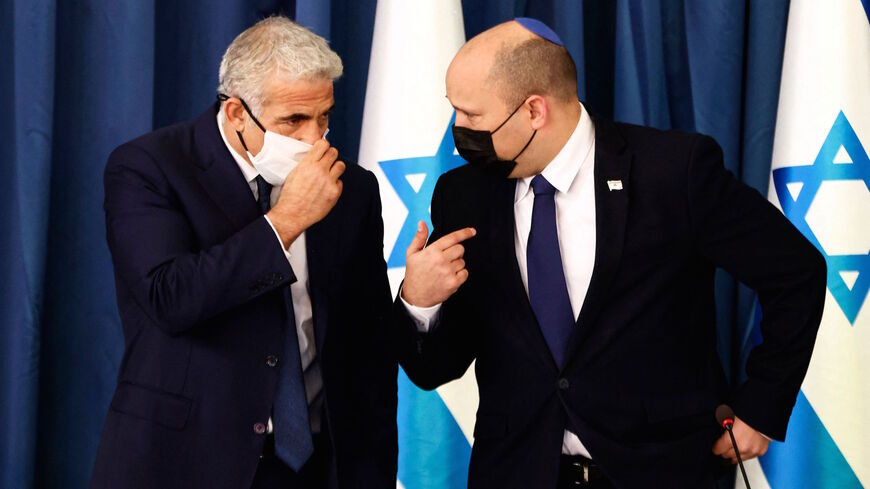 Foreign Minister and Alternate Prime Minister Yair Lapid flew to Morocco Aug. 11 to attend the reopening of Israel’s mission there. Since then, he has posted an almost endless stream of touching photos and texts to mark the historic occasion. He seems to have captured everything, from boarding the plane to landing in Rabat, and from the official reception that he received to the signing of new cooperation agreements between the two countries. Lapid ended his successful first day in Morocco with a video clip featuring him. It had all the markings of a promotional video, with all his best photos and selections from his speeches about the importance of peace, set to upbeat music.

There was, however, one thing missing from Lapid’s social media feed on that historic day. There was no mention of the coronavirus, even though the devastating fourth wave has begun to claim more victims in Israel. There was not even any mention of the enormous strain on the country’s hospitals. Then again, there was no mention of the coronavirus in Lapid’s online accounts in the days leading up to his Moroccan adventure. Instead, he congratulated Olympic gold medalist Linoy Ashram and reported that Israel sent airplanes to Greece to help fight the forest fires ravaging the country.

This is, of course, no coincidence. Lapid is an experienced politician and a top-notch campaigner. It should come as no surprise that he is doing everything he can to distance himself from the emerging fiasco in the handling of the coronavirus pandemic. He is trying to establish his reputation as a statesman, leaving Prime Minister Naftali Bennett almost all alone in confronting the national health crisis. While Lapid was cutting ribbons in Rabat, Bennett was trying to reduce the damage caused by his two-month-long strategy of ignoring the virus, which he adopted as soon as he entered office. This approach was not just a failure. Experts in the Ministry of Health have some chilling predictions about what still lies ahead, including forecasts of thousands of serious cases of the disease in just a few weeks’ time. Bennett’s Facebook and Twitter feeds are full of content intended to present him to the public as being level-headed and cool as he engages with the virus and maintains control of this precarious situation. They show him encouraging the elderly to go get a third dose of the vaccine.

Lapid and Bennett seem to be following two separate agendas in two parallel universes. In fact, it would appear to an onlooker that the health crisis brought on by the coronavirus affects only one side of the equation. The problem with this is that these two men promised two months ago that they planned to offer Israelis a new model of leadership, based on mutual cooperation and support.

In practice, however, Lapid, who is scheduled to succeed Bennett as prime minister, wants a clean slate when he faces the public in the next election, based on the notion that his partnership with Bennett could fall apart prematurely at any moment. Should that happen, he will immediately become prime minister and launch his next campaign for office from that advantageous position.

It is important to remember that Lapid deigned to allow Bennett to be part of a rotation agreement for prime minister, even though Lapid’s party controlled three times as many seats. This was a show of real political acumen. It was the only way available to Lapid to push former Prime Minister Benjamin Netanyahu out of office. Bennett may have received “the keys to the kingdom,” but he is a weak prime minister, who does not control his ministers. In fact, he is completely reliant on each and every one of them.

To the outside world, Bennett and Lapid are the picture of an idyllic relationship. Beneath the surface, however, things are hardly perfect. Upon closer inspection, it is impossible to ignore the growing cracks in this alliance. Last week, for instance, it was revealed in the press that Lapid does not participate in meetings of the coronavirus cabinet, a surprising development considering that this cabinet was formed to address a mounting national crisis.

The coronavirus cabinet is charged with determining government policy in its efforts to block the spread of the virus. In the previous government, it was a very tumultuous gathering, which met frequently for long, often heated sessions involving all the senior ministers. It therefore came as a big surprise, when Lapid’s office released a statement, saying, “Representatives of Lapid attend the cabinet meetings, including the director of the alternate prime minister’s office and representatives of the consular branch of the Foreign Ministry,” and provide Lapid with “continuous updates on the hearings.”

As a result of the public uproar this evoked, Lapid responded the following day that he is attentive to the criticism and will participate in future meetings whenever possible. Then the cabinet met on the evening of Aug. 11 to discuss what everyone agreed was a crisis: the sharp and worrisome rise of the national infection rate. While decisions were being made to reimpose strict restrictions, Lapid was in Morocco. While he did make a point of joining the meeting via Zoom in order to stave off potential criticism, he was not at the meeting for any real length of time. In fact, his “presence” was hardly felt at all. All he said was that he has Bennett’s back. All in all, it seemed like a clever way to show collegiality, while letting Bennett drown in the coronavirus mire.

This is, by the way, exactly the same tactic adopted by most other ministers, who avoided the meeting. As for Lapid, however, it is a political strategy very far removed from what would be expected from a national leader during such a serious crisis.

Another example of the way Lapid is embracing Bennett is evident from the following account of Bennett’s planned visit to Washington. While there, he is expected to visit the White House and have his first official meeting with President Joe Biden. The problem is that behind the scenes, things aren’t running as smoothly as people would hope. Bennett’s office has yet to receive an official invitation to that meeting, despite the government’s pressure on the White House. So Lapid offered to expedite the process and coordinate the visit, with the help of his own contacts in Washington. According to Army Radio, he actually made the offer on more than one occasion in the last two weeks, only to be told that his help is not necessary.

This is another example of the same pattern of behavior. While it may look like Lapid is trying to be friendly by reaching out to Bennett and offering his support, he is actually working separately as part of a calculated strategy.

Bennett seems to realize this, too. Senior sources in the government claim that Bennett and his people are behind the leak that Lapid does not attend meetings of the coronavirus cabinet. This is intended to put Lapid in a negative light, while showing that the prime minister stands alone on the forefront of the battle against the virus.

Where is all this leading? It is still too early to tell. Neither side in this fandango wants to see their strategic partnership fall apart. On the other hand, as the coronavirus situation worsens, the real gamesmanship in the new government could begin to surface.