The National Education Association will vote this week on motions that call for backing the Palestinian cause as well as an end to US military support for Israel and Saudi Arabia. 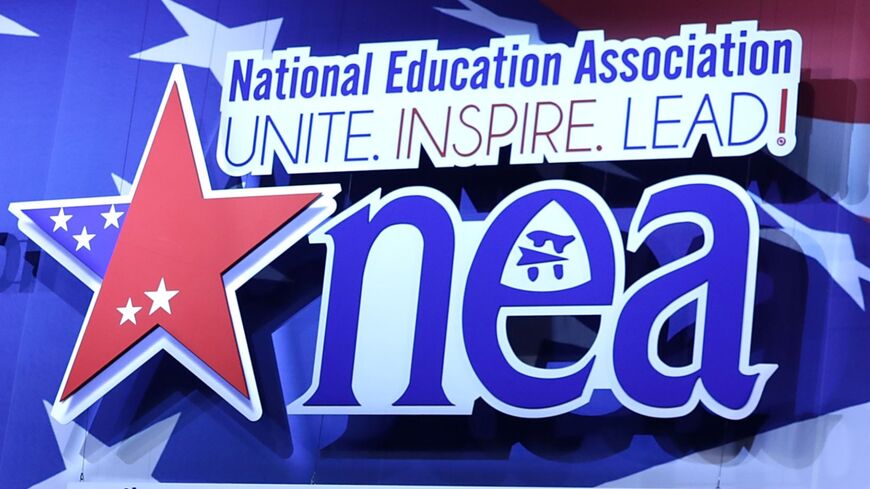 The background for the stage for the National Education Association's 95th Representative Assembly is seen on July 5, 2016, in Washington. This week's 2021 NEA convention is being held virtually, as was last year's due to the coronavirus pandemic. - Alex Wong/Getty Images

A major teachers union in the United States will soon vote on resolutions in support of the Palestinian cause and against US backing for the Israeli and Saudi governments.

The National Education Association (NEA) represents American public school teachers, and is the largest such organization in the country. During its annual meeting, which is taking place virtually until Saturday, union members will vote on a variety of resolutions.

Some of the resolutions pertain to the Israeli-Palestinian conflict, as well as US-Saudi relations. New Business Item 29 calls on the association to support the Palestinian cause and demand the US government stop military and other support to Israel and Saudi Arabia.

“The NEA will publicize its support for the Palestinian struggle for justice and call on the United States government to stop arming and supporting Israel and Saudi Arabia,” read the item.

New Business Item 29, like most such proposals, was submitted by 50 unnamed union representatives. It referred to the “heroic struggle” of Palestinians against Israel.

“The Arab population of Palestine has again risen up in a heroic struggle against military repression and ‘ethnic cleansing’ by the Israeli state and extreme nationalist forces in Israeli society,” it read.

Another Palestine-related resolution is New Business Item 51, which says the association should educate the general public on Palestinian history, as well as the detention of Palestinian children by Israel. The item also calls on the teachers to advocate for the educational rights of Palestinian kids, among other things.

The association’s consideration of these resolutions was first reported by The Washington Free Beacon, an American conservative news outlet.

A resolution similar to New Business Item 51 was defeated at a 2019 meeting of the NEA.

The Israeli-Palestinian conflict is an increasingly divisive issue in the United States. The United States provides billions in aid to Israel every year, in addition to a smaller amount to the Palestinian people. Criticism of US support for Saudi Arabia has also grown in recent years, in part due to Saudi Arabia’s involvement in the Yemeni civil war and the 2018 murder of journalist Jamal Khashoggi.