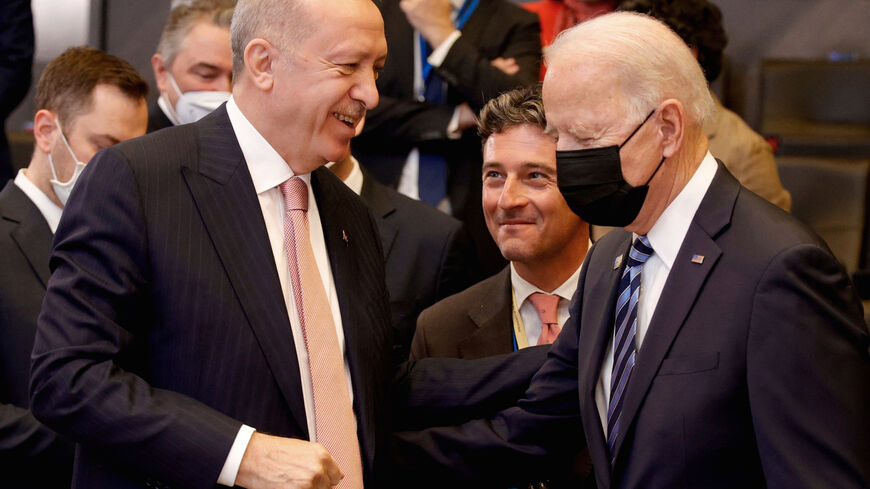 US President Joe Biden (R) speaks with Turkey's President Recep Tayyip Erdogan prior to a plenary session of a NATO summit at the North Atlantic Treaty Organization (NATO) headquarters in Brussels, on June 14, 2021. - OLIVIER MATTHYS/POOL/AFP via Getty Images)

"No unsolvable issues." Following his meeting with US President Joe Biden on the sidelines of the NATO summit this week in Brussels, Turkish President Recep Tayyip Erdogan said, "There are no unsolvable issues in the Turkey-US relations, with the areas of cooperation, quite the contrary, outnumbering the contentious topics."

Erdogan’s new tone belies the two stickiest issues — US sanctions on Turkey for its purchase of the S-400 Russian missile defense system and a seeming unbridgeable disagreement about the Syrian Kurds — which appear no closer to being solved, as Amberin Zaman reports.

Moving the missiles. US sanctions on its NATO ally for Ankara’s purchase of the Russian S-400 missile defense system are the "deepest sore" in US-Turkey ties, Zaman writes. There had been some buzz that a face-saving way out might be to move the missiles to the US air base in Incirlik, Turkey, as Diego Cupolo reports. That, so far, remains talk, but there’s no doubt both sides are desperate to move beyond this crisis.

"Warped mentality." In his post-summit remarks, Erdogan complained about the "warped mentality" among states that he said label terrorists as good or bad. Here he means the Syrian Kurdish groups — the People's Protection Units (YPG) and Democratic Union Party (PYD) — which comprise the core of the US-backed Syrian Democratic Forces (SDF). To Erdogan, the YPG/PYD are on the same level as the Islamic State and linked directly to the Turkish Kurdistan Workers Party (PKK), which Turkey and the United States have designated a terrorist group. The United States considers the SDF a valued partner, not a “good” terrorist group, and has no plans to bail on it in the fight against the Islamic State. This one for now is in the "no solve" category.

Give and get on Afghanistan? One area where Turkey seems ready to provide an assist is Afghanistan, as the United States draws down its forces there after two decades. If so, Erdogan will expect something in return, likely on the other sticky issues. “If we are asked to not leave Afghanistan and provide assistance," Erdogan said, "then the support the US will give us in diplomatic, logistical and financial areas is of great importance.”

Final Take: The summit reflects a new normal in US-Turkey ties. Gone is any nostalgic talk of a "model partnership," as Philip Gordon, now special assistant to the president and deputy national security adviser to the vice president, told us in a podcast in November (before he joined the administration), adding that it is still very much in the US interest to find areas to work together. The old "model partnership" talk may have been more aspiration than reality anyway, especially given Erdogan’s record, and the new, more transactional "handshake not embrace" normal of US diplomacy is not just for Turkey, but also for other US partners in the region, including Egypt and Saudi Arabia.

Topping the foreign policy agenda of Israel’s fragile new government is winning over the Biden administration. As Ben Caspit puts it, “the most urgent task facing them is to mobilize the administration’s support for their government’s survival.”

Prime Minister Naftali Bennett, an ultranationalist religious politician who opposes a Palestinian state, has his work cut out for him navigating the relationship with the United States without alienating his right-wing base. His centrist coalition partner, Foreign Minister Yair Lapid, will manage the day-to-day relationship with Washington, and Israel’s incoming president, Isaac Herzog, is expected to lend his international expertise.

With Iran days away from electing a new president, Bijan Khajehpour breaks down some of the pledges made by front-runner Ebrahim Raisi. Among them, the hard-line judiciary chief has promised the construction of 4 million cheap housing units, the creation of 1 million jobs per year, reforming the banking sector and lowering inflation to single digits by 2025.

Such policies will “require massive investments and an end to continued budget deficits that will be difficult to achieve under a hard-line presidency,” Khajehpour writes. Regardless of who wins the presidency, sanctions relief from a potential nuclear deal with the United States would generate much-needed economic momentum.

Our correspondent in Tehran takes a look at Raisi’s foreign policy plan. The 60-year-old cleric has focused his campaign on domestic issues but said during a debate Saturday that he would abide by the nuclear deal as president. It remains to be seen how Raisi would overcome opposition to the multilateral accord from hard-liners at home, if elected.

On the heels of brokering a cease-fire between Israel and Hamas, Egypt is now playing mediator between the Gaza-based militant group and its more moderate political rival in the West Bank, Fatah. But hopes faded for Palestinian reconciliation after Cairo called off a highly anticipated summit between the factions last week.

The postponement was probably a face-saving measure, says Adnan Abu Amer. Egypt has been unable to find common ground between the competing Palestinian movements and likely wanted to avoid holding a meeting that yielded no results. Despite Cairo’s failure to get Hamas and Fatah on the same page, Amr says North African country isn’t washing its hands of the Palestinian file.

Is a rapprochement between Saudi Arabia and Syria on the horizon? Recent visits to Damascus by the Saudi intelligence chief and Saudi tourism minister fueled speculation that Riyadh could become the latest Gulf state to reestablish ties with the war-torn country, following a trend set by the United Arab Emirates and Bahrain.

Don’t expect a swift return to normalization, writes Samuel Ramani. Syria still mistrusts Saudi Arabia, which backed the opposition seeking to topple President Bashar al-Assad in the early years of the war. Anti-regime sentiment runs high in the kingdom, and Saudi officials are concerned that investing in the Syrian economy could unintentionally benefit archrival Iran.

The rebrand continues for Abu Mohammed al-Golani, whose group Hayat Tahrir al-Sham has control over Syria’s northwestern Idlib province. An infographic recently posted on the HTS Telegram account — titled “Who is Abu Mohammed al-Golani?” — revealed new biographical information about Golani, much of which was confirmed in a documentary with PBS’s Frontline that aired days prior. In the new sit-down interview, Golani is sporting a fashionable haircut and blue suit, in what Khaled al-Khateb says is an attempt at billing “HTS as a mainstream, nationalist opposition group fighting the government of Syrian President Bashar al-Assad.” Golani, whose militant group is an offshoot of al-Qaeda, is designated as a terrorist by the United States.

Minutes after the swearing-in of a new Israeli government that ended Benjamin Netanyahu’s latest,12-year stretch in power, Ben Caspit spoke with former Israeli Prime Minister Ehud Olmert about the broad-based coalition's chances of survival. Only time will tell if Prime Minister Naftali Bennett and his governing coalition are “courageous enough” to find common ground on issues like healthcare and infrastructure, Olmert said. He also described Netanyahu’s exit speech thrashing Bennett as “vintage Bibi.” Listen to Caspit’s podcast with Olmert here.

Alaa Omran has the story on how Egyptian researchers discovered fossilized fish in sediments that date back 56 million years. Moonfish, deep-sea hatchetfish and a predatory species known as bonytongues were among the ancient fish uncovered during an excavation of rock layers in Egypt’s Eastern Desert. The fish were able to survive during a period of extreme global temperatures, and the researchers hope the new fossils can shed light on modern-day climate change.

Turkey’s economy is expected to grow 5.8% this year but inflation will remain high, the International Monetary Fund (IMF) said in a statement last week. The country experienced a decline in economic activity due to the pandemic, but its “recovery has been remarkable, setting Turkey apart from its peers,” the IMF said. The fund called on Ankara to rebuild its high-quality reserves, improve central bank independence and take steps to fight inflation. Read more from the IMF here.