Fossilized fish dating back 56 million years have been discovered in Egypt’s Eastern Desert, shedding light on a time period when Earth was experiencing massive warming. 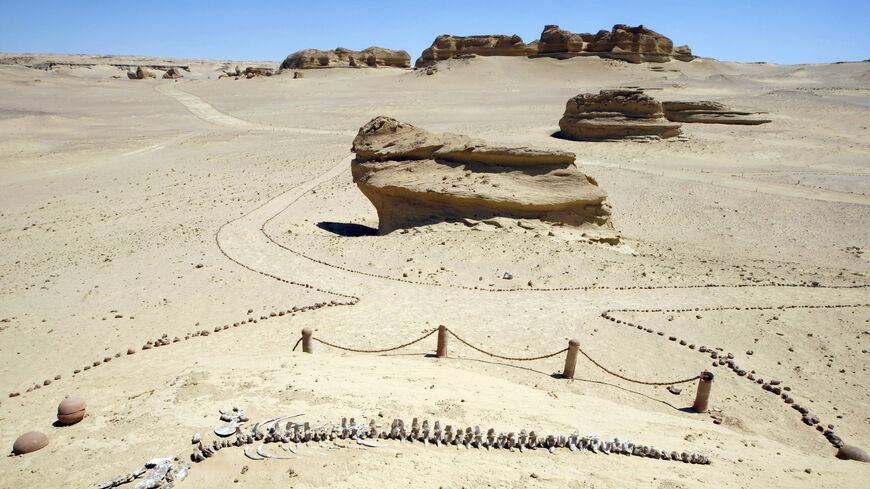 Remains of an early whale from 40 million years ago lies on the desert pavement of Wadi El-Hutan, 100 kilometers south of Cairo. About 400 skeletons of ancient water life such as mammals and reptiles have been identified in what used to be an ancient shoreline. - CRIS BOURONCLE/AFP via Getty Images

CAIRO — An Egyptian research team that includes Egypt's Mansoura and Tanta universities, the American University of Cairo and the University of Michigan recently discovered the remains of vertebrate fossils from sediments dating back 56 million years at a site in Egypt's Eastern Desert.

The scientific journal Geology published last month the details of the discovery of creatures that withstood highly elevated global temperatures at a site that is today in the Egyptian desert.

Several different types of bony fish were found, including the moonfish, the deep-sea hatchetfish and a predatory species known as bonytongues, which still have living relatives of their genus.

According to the study, these fish currently live in parts of the Indian and Pacific oceans, and the discovered fish lived in a harsh environment and weathered the Paleocene-Eocene Thermal Maximum (PETM) during which the planet witnessed unprecedented global warming.

Sana al-Sayed, deputy director of the Mansoura University Center for Vertebrate Fossils and lead author of the study, told Al-Monitor this discovery is a unique scientific event and this is the first time that different types of fish of that important period in the geological history have been documented from southern continents (Africa, Asia, South America, Australia and Antarctica).

Fish are sensitive to any climate change, she added, and this is the first time the discovery of a moonfish fossil was recorded from Africa.

Hesham Sallam, a professor of vertebrate excavations at the American University of Cairo and Mansoura University, told Al-Monitor, “We read the past to be able to understand the present and predict the future. One of the important topics of interest to contemporary humans is the identification of global warming. There are several episodes of global warming in geological history that hit Earth millions of years ago, namely 10 million years after the extinction of dinosaurs. Global warming is serving as a model that helps understand the behavior of living animals to be able to fathom what will happen to them in the future based on what previously happened to these fish.”

Salam added, “We are trying to find [more details] on the time period dating back to 56 million years ago. Earth was struck with global warming that lasted 200,000 years, the sea temperature was 40 degrees Celsius, and there was no North and South pole. All the snow melted, and Earth was dominated by rain forests; these forests were found in the Arctic and Antarctic.”

He said all the species from the PETM time period that were discovered in the past were found in the northern continents of North America and Europe, while no fossils were discovered in Africa, Asia, South America and Australia until recently. Given the importance of such discoveries, the Egyptian research team, which Salam headed, began searching the area in Egypt’s Eastern Desert in 2015.

One of the most important fish that was found, he said, was the moonfish, which is the oldest to be discovered so far. Also, he said, traces of life were found for fish that lived in high-temperature waters in the depths of the sea to reach cold currents.

Salah Moselhy, head of the General Authority for Fish Resources Development and a member of the Animal and Fisheries Research Council at the Academy of Scientific Research and Technology, told Al-Monitor, “It could be true that these fish were found in the Eastern Desert for two reasons. The first is that they have adapted like other species to the environment in which they live, and the second is that the temperature of the fish, in general, adapts to the temperature of the water in which they live.”