Did whales originate in Egyptian waters?

A group of Egyptian scientists discovered a 43 million-year-old fossil in "Whale Valley" — now in the Western Desert. 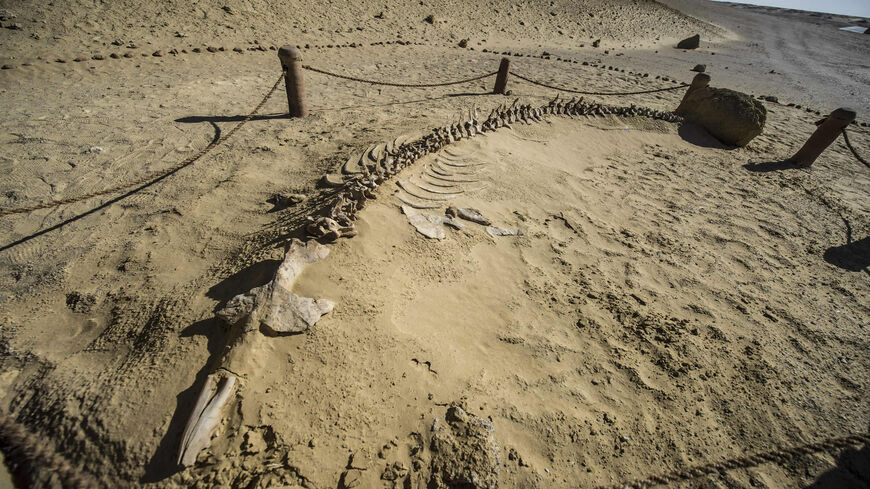 CAIRO — An Egyptian team of scientists from Mansoura University made a new discovery of a previously unknown species of an amphibian whale in Egyptian waters that lived 43 million years ago.

In a statement posted on its official Facebook page Aug. 25, the Egyptian Cabinet praised the discovery as a breakthrough for Arab paleontologists, since it is the first time in history that an Arab-Egyptian team documents a new species of whales.

The study was authored by Hesham Sellam, a prominent vertebrate paleontologist, professor at the American University in Cairo and founder of the Mansoura University Vertebrate Palaeontology Center. Mohamed Sameh, who found the whale fossil in 2008, co-authored the paper on the discovery that was published Aug. 25 in the Proceedings of the Royal Society B: Biological Sciences.

In 2008, a research team at the Egyptian Ministry of Environment found the whale's fossilized remains in Wadi al-Hitan in the Fayoum region, southwest of the capital Cairo. The area contains invaluable fossil remains of extinct whales.

In the Cabinet statement, Sameh pointed to the existence of many ancient whales in the Eocene Epoch in the Fayum Depression in Egypt's Western Desert. He stressed the importance of the area for studying the evolution of whales.

Sameh said that he had kept the fossil he discovered in 2008 with the Ministry of Environment for scientific research purposes, before he agreed to assign the study of the fossil to Abdullah Gohar, who was a master's student at the Faculty of Sciences at Mansoura University in 2017. Gohar worked on this study as part of his master's thesis in vertebrate fossils.

“The study showed that the fossil belonged to a new species of whale that was not known before. This helps trace back the evolution of whales from land dwellers to sea creatures,” Gohar told Al-Monitor.

He explained that the whale has several anatomical features that enabled it to coexist at that time, adding that whales are mammals that moved from land to water in ancient times. He said, “The four-legged whale weighed an estimated 600 kilograms [1,323 pounds] and was 3 meters [10 feet] long. Its somewhat rectangular body and the size of its vertebrae enabled it to be a great swimmer. We discovered from the rehabilitation of the muscles connected to the spine that it was also able to carry its body on land.”

The Egyptian team named the whale “Pheumsetis Anubis.” Gohar explained that the first syllable — “Pheu” — refers to the Fayoum Depression, the home of the whale, while “setis” is a Latin reference for the word whale. “Anubis” is the name of the pharaonic god of death, which just like the whale had a jackal-like head.

“We found out that the new whale was radically different from all its whale peers known before, especially in the size of the teeth and the dimensions of the skull. It had great predatory skills and strong and huge jaw muscles, which made it one of the fiercest creatures in that environment. It was more like the god of death for the rest of the mammals at the time, similar to the blue whale that lives today,” Gohar noted.

Wadi al-Hitan — also known as Whale Valley — is located in the Western Desert of Egypt and was designated a UNESCO World Heritage Site in July 2005 for its hundreds of invaluable fossils of now extinct whale species. “It is the most important site in the world for the demonstration of this stage of evolution. It portrays vividly the form and life of these whales during their transition,” as can be read on the UNESCO website.

Gohar pointed out that despite the abundance of fossils in the Fayoum region, the majority of relevant studies and research were conducted by foreign scientists. “Now we have become the first Egyptian team to register in its name such an amazing discovery,” he added.

Salam said, “We did not want to leave the fossil to be studied by foreign researchers. We wanted to assign an Egyptian student to work on the study. Gohar, who hails from Fayoum governorate, was the perfect choice. The whale lived on the land of his ancestors millions of years ago. This discovery will help unearth more finds in the region.”

The Proceedings of the Royal Society B: Biological Sciences said in the paper that the new discovery contributed to increasing knowledge about the origin of ancient whales, their coping mechanisms and their ecosystems.

He hopes that one day the Egyptian government will ​​open a natural history museum that will house these vertebrate fossils.

Gohar believes that the discovered fossil of the walking whale has answered scientific questions about the origin of whales. “This discovery has also raised many scientific questions, most notably whether the ancestors of whales originated from India and Pakistan. Egypt may now have another say about their origin,” Gohar concluded.