Egypt has prepared a file to nominate the Gebel Qatrani area, which houses fossils of half of all creatures from the beginning of creation until today, in Fayoum to UNESCO's World Heritage List. 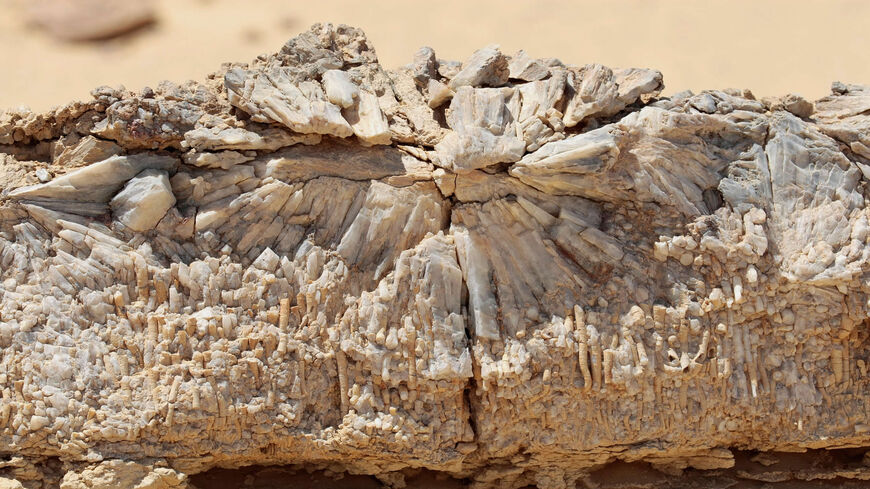 Fossilized remains of an early whale from 40 million years ago are seen in Wadi al-Hutan, south of Cairo, Egypt. - Cris Bouroncle/AFP via Getty Images

The Egyptian Ministry of Environment has prepared a file to nominate the Gebel (Mountain) Qatrani area in Fayoum, 100 kilometers (62 miles) southwest of Cairo, for UNESCO's World Heritage List.

“This site dates back 35 million years. It houses fossils of half of all creatures from the beginning of creation until today, such as elephants, monkeys, birds, whales and plants,” said Mohammed Sameh Antar, director general Central Parks of Egypt, Nature Conservation Sector, Egyptian Environmental Affairs Agency and Ministry of Environment.

He told Al-Monitor that the 200-square-kilometer (77-square-mile) area documented the most significant interval in history since the dinosaurs disappeared 65 million years ago.

To prepare the site to be listed by UNESCO, Antar said that the ministry has been working to protect the area and establish basic infrastructure since 2018.

“Since 2018 we have established infrastructures such as paved roads, restrooms, signs informing visitors about the site as well as building eco-lodges suitable for the local community that provides local food and drinks,” he said.

He added that they also raised the Fayoum residents' awareness of the importance of the site.

“Before the development process, the site was a mere desert, supervised by the ministry, and housed purely scientific-related fossils that ordinary people may not have enjoyed.”

Antar noted, “We also established an open-air museum like that of Wadi Hitan. Gebel Qatrani will be the second site in Fayoum added to the [World Heritage] List."

He referred to Wadi al-Hitan (Whale Valley) that contains fossils of extinct whales, and that was added to UNESCO’s list in 2005.

According to Antar, the Gebel Qatrani museum delves deep into the story of the evolution of all creatures and the transformation from the Eocene to the Oligocene epochs.

It also displays marine and continental vertebrate fossils in addition to petrified plants.

Antar said that the site reveals how the climate changes through the ages.

“The museum and its displays resemble a messenger who came from the deep past to tell us what happened because of climate change. It shows how Egypt had forests; how there were whales in the desert; how Egypt once housed elephants and hyenas,” he explained, adding that Egypt had dense forests like the Amazon that stretched from the Bahariya Oasis in the Western Desert, some 370 kilometers (230 miles) from Cairo, to Suez in the northeastern part of the country.

One of the many displayed items in the open-air museum is the skull of the monkey Aegyptopithecus, which is an early fossil catarrhine that predates the divergence between humans and Old World monkeys. It is the same size as a modern howler monkey.

Gebel Qatrani has been included in UNESCO's tentative list since 2003.

Antar said that the file will be presented to UNESCO before the end of this year.

Ahmed Abdel-Aal, former director of Fayoum Antiquities, told Al-Monitor that the area of Gebel Qatrani is not just important geologically.

“There are basalt quarries in Gebel Qatrani, which have been exploited since ancient Egypt,” he said. He explained that the name Qatrani is derived from "qatran," the Arabic name for tar, because of its black color.

The area of Gebel Qatrani also includes the oldest paved road in the world dating back 4,000 years, according to Abdel-Aal.

“People used that road in transferring the basalt to the Qasr El-Sagha Temple,” he said, referring to the nearby ancient temple, which historians say either dates back to the Middle Kingdom (circa 2055 B.C.-1650 B.C.) or the Old Kingdom (circa 2700 B.C.-2200 B.C.). It was discovered in 1884 by German explorer Georg August Schweinfurth.

Abdel-Aal noted that ancient Egyptian workers collected the basalt inside the temple, breaking it into small pieces and transferring it by barges to other places in the country via the nearby Lake Moeris, which is now the smaller saltwater lake called Birket Qarun.

“Ancient Egyptians used the basalt in paving the floors of archaeological sites like that of Khafre Pyramid in Giza in addition to making statues,” he said.

Abdel-Aal believes that when that area is added to UNESCO’s World Heritage List, it will have a great impact on tourism in the country.

“It will be visited by people from all over the world and therefore will increase environmental and historic tourism,” he concluded.