Among the many archeological treasures of Tuna el-Gebel in Upper Egypt is a large cemetery for sacred animals. 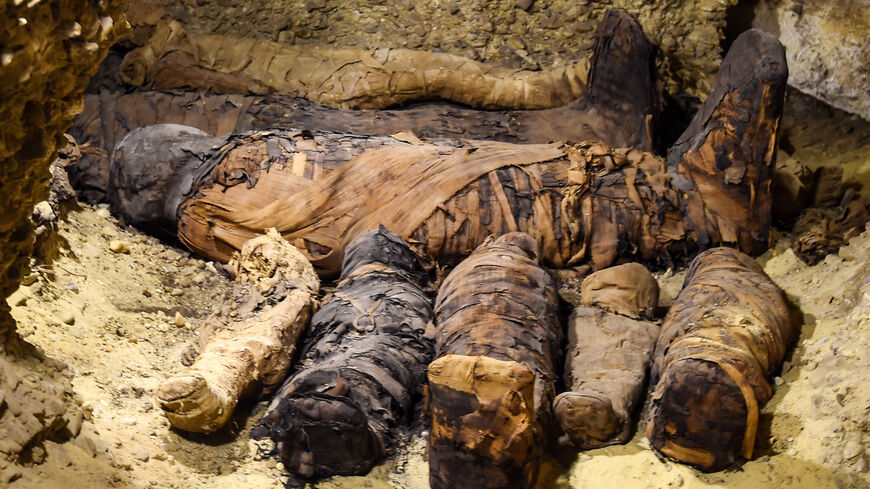 This picture taken on Feb. 2, 2019, shows newly discovered mummies wrapped in linen found in burial chambers dating to the Ptolemaic era (323-30 BC) at the necropolis of Tuna el-Gebel in Egypt's southern Minya province. - MOHAMED EL-SHAHED/AFP via Getty Images

Tuna el-Gebel, a village in the center of Egypt, is known as the necropolis of Hermopolis. The “City of the Dead” is famous for a large cemetery of mummified animals established two millennia ago.

Magdy Shaker, chief archeologist at the Ministry of Tourism and Antiquities, told Al-Monitor, “The excavations and research in the Tuna el-Gebel area began nearly 100 years ago by German archeologist [Gunther] Roeder and renowned Egyptian archeologist Sami Gabra. Gabra was the first to discover the monuments of Tuna el-Gebel with the support of Cairo University and then-dean of Arabic literature Taha Hussein during excavation works from 1931 to 1954. Later on, a joint mission of the Universities of Cairo and Munich carried out works that led to the discovery of the largest human cemetery in Graeco-Roman Egypt.”

Shaker explained, “The village of Tuna el-Gebel is located to the west of the city of Malawi and west of Hermopolis. It was the capital of the 15th Upper Egyptian Nome, and was originally named ‘Towns’ in the Pharaonic era and ‘Tahnet’ in the Roman era. The two names mean ‘blessing.’”

Shaker added that Tuna el-Gebel features funerary chambers decorated with a mixture of ancient Greek and Egyptian art. “The area is becoming more famous with new discoveries and the villageof Tuna el-Gebel has not yet revealed all of its secrets.”

Shaker said the animal burial site is believed to be the largest ever to be discovered. “It includes four large catacombs with huge galleries carved in the rock. Ancient Egyptians would bury the mummified remains of sacred ibises and apes inside those galleries.”

He added, “The cemetery is divided into four parts, the most ancient one dating back to the 26th Dynasty. Inside the cemetery, there are two main roads and other smaller passages with large halls on each side where the birds’ owners would be received. At the entrance was a temple with a small stone altar that was used during funerary rituals specific to ibis and baboons.”

Sabah Abdel Razek, director of the Egyptian Museum, told Al-Monitor that the Tuna el-Gebel area offers a historical record of ancient architecture, sarcophagi, statues of deities and human figurines, pottery, stone and glass vessels, jewelry, mummies, papyri, lamps, surgical instruments, a water clock and other artifacts. “All these show the richness and diversity of the site" and the archeological research done there makes it "one of the major archeological sites in Egypt,” she said.

Abdel Razek pointed out that the cemetery for sacred animals consists of catacombs and lower passages that extend for a distance of more than 10 kilometers (six miles). She said, “Thousands of mummified ibises and baboons, symbolic of the god Thoth, were found in it. The site also includes the ruins of the great Thoth temple and the dwellings that were inhabited by the priests responsible for the funeral and ritual service in this temple. Another temple was dedicated to the baboon god near the entrance to the cemetery of sacred animals.”

Abdel Razek explained, “Animals in ancient Egypt were revered as tribal deities, and [their burial] was an important religious ritual during that historical era. Perhaps one of the most distinctive characteristics of the Egyptian deities were their depiction with the heads of birds and other animals." Around 800 BC and thereafter, she said, "many sacred animals were mummified and buried in cemeteries dedicated to them in sacred places in different parts of the country.”

She continued, “In certain cases a specific animal, such as the calf Apis, which was sanctified by the god Ptah, was considered sacred. Sometimes the sanctified animals included all other members of a species. For example, the baboon and the ibis were two animals sacred to the god Thoth, while cats were the sacred animal of the god Bastet.”

Salima Ikram, a professor of archeology at the American University in Cairo, explained, “There are four different types of animal mummies. The first type were pampered animals that were buried with their owners, and the second were mummified animals that were placed whole or in pieces in the cemetery as a symbolic feeding of the deceased in eternal life. The third were sacred animals, and the fourth were animals offered as sacrifices.”

Ikram told Al-Monitor, “The animals were mummified in the same way as human mummies, with modifications. Mummification mainly relies on drying the body to prevent the spread of bacteria that lead to mold. Ancient Egyptians usually emptied the body by making an opening in its left side or along its stomach. To mummify humans, the guts were also mummified after they were removed from the body and were placed in special containers called canopic pots. Only birds’ guts were returned to the body after drying them in Natron salt. The drying process usually took 40 days and the complete mummification process took 70. This period probably varied in the case of smaller animals. And after drying, the animal was rubbed with different oils to restore softness to its limbs before wrapping it in linen and preparing it for burial.”

Ikram added, “Different mummies of animals revealed different aspects of the ancient Egyptian civilization and environment. The animal wealth was much more varied and wider in ancient Egypt compared to now. For instance, the cattle egret species that was sanctified in ancient Egypt and was quite prolific at the time is now extinct, just like other types of deer and raptors.”