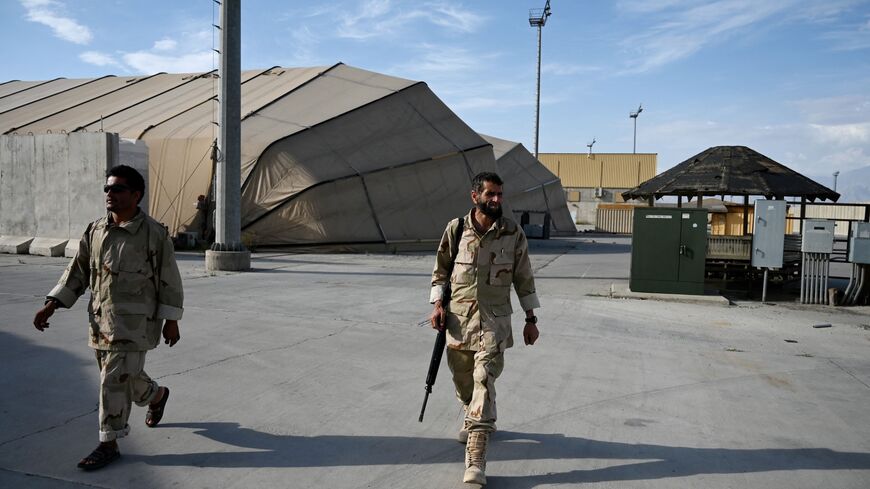 Afghan National Army soldiers walk inside the Bagram air base after all US and NATO troops left, some 70 kilometers (43 miles) north of Kabul, on July 5, 2021. - WAKIL KOHSAR/AFP via Getty Images

Taliban officials on July 12 labeled Turkey’s plan to take over security at Kabul International Airport as “reprehensible” and warned Ankara of “consequences" if Turkish forces replace US soldiers, who are expected to withdraw by the end of August.

Hammering out the details: Turkey already has 600 troops deployed at the Kabul airport, because it is a member of the NATO mission that has been in Afghanistan for two decades. The plan so far is that Turkey will not send more troops; those there will simply stay on after US and other NATO forces leave. At least that’s the current plan. Turkish President Recep Tayyip Erdogan said July 8 that the United States and Turkey had agreed on the "scope" of Turkey’s mission to take over responsibility for the security of Kabul airport from the United States and NATO. But the details of the mission are still being "hammered out," according to the Pentagon.

The stakes for Turkey: The Taliban threats notwithstanding, Erdogan enjoys projecting Turkish power, and the costs may be low. The United States has made clear it is keeping an over-the-horizon force in the region, as well as perhaps more than 600 troops for embassy security. The mission puts Erdogan in the center of the action, in a region where Turkey already has interests and influence. But the real prize is getting in the good graces of US President Joe Biden, who has made withdrawal from Afghanistan a top priority. The other sticky issues in US-Turkey relations — differences on the Syrian Kurds, Turkey’s purchase of the Russian S-400 missile defense system — seem, at least for now, irreconcilable.

Three things to watch as the United States and Turkey "hammer out" the details:

1. Afghan asylum seekers coming via Iran: Turkey currently hosts almost 4 million refugees (out of a population of 83 million), including 3.7 million Syrians and 200,000 asylum seekers from Afghanistan, who arrived via Iran. There are worries in Ankara that more may be coming as the Taliban sweep through the country. Since January, 270,000 Afghans have been displaced as a result of increased fighting and insecurity, according to the UN refugee agency, UNHCR, (the total number of displaced is 3.5 million out of a population of approximately 40 million). Diego Cupolo has the story here.

2. Syrian mercenaries step up? According to some reports, Turkey may be considering sending Syrian mercenaries to Afghanistan, as it has done in Libya and Nagorno-Karabakh. If Ankara is considering such an option, this would not be preferred the deployment from a US perspective. Fehim Tastekin has the story here. Afghanistan of course has its own tragic and complex history of jihadi fighters coming from outside the country to wage "holy war" against occupying powers. The mujahedeen fight against Soviet forces was where Osama bin Laden and other al-Qaeda terrorists got their start.

3. Iran sees opportunity: Iran, which borders Afghanistan, also senses opportunity with the US withdrawal. Iran's Foreign Minister Mohammad Javad Zarif hosted "intra-Afghan" talks in Tehran on July 8, although that forum was more sideshow than the Afghan talks the US is hosting in Qatar. But Iran will be a key player, and more so than Turkey, also fears an exodus. Foreign Ministry Spokesman Saeed Khatibzadeh said on July 9 "there is no insecurity" on Iran’s border with Afghanistan, following a Taliban takeover of Afghan customs facilities at the border crossings this month.

Our take: Erdogan seems ready to step up, as the benefits for US-Turkey ties likely outweigh the risks of not staying. But Erdogan doesn’t work for free, and he’ll present a bill for his services from Washington and Brussels. “If we are asked to not leave Afghanistan and provide assistance, then the support the US will give us in diplomatic, logistical and financial areas is of great importance,” he said June 14.

Listen for more: South Asia expert Ayesha Siddiqa talks with Amberin Zaman about why Turkey would accept the mission, as a "symbol" of NATO presence, as Western nations leave, and Afghanistan begins a new, uncertain chapter.

Saudi Arabia has announced plans to launch a second national airline “as soon as possible,” but is the kingdom too late to the game?

Sebastian Castelier examines whether Riyadh’s planned airline can keep up with the Emirati and Qatari flag carriers that dominate the East-West transit market, or compete with Turkish Airlines, which has emerged as an alternative to the Gulf hubs.

Castelier explores how opposition to a second Saudi airline fits within the “broader rivalry for the Gulf’s economic leadership, as a global shift toward low-emissions energy jeopardizes the future of Gulf petro-states.” The rivalry was thrust into the open earlier this month as Saudi Arabia and the United Arab Emirates clashed over an OPEC+ plan to extend a cap on oil output.

Even after the defeat of its self-styled caliphate, the Islamic State (IS) remains a threat to western Iraq. A recent attack in the city of Haditha left four locals dead when a pickup truck of IS fighters opened fire on a group of fishermen. The attack was emblematic of the hit-and-run tactics IS cells are using to terrorize Sunni-majority areas, Shelly Kittleson reports.

Meanwhile, Iraq has recorded a wave of intensified attacks on bases hosting US-led international coalition forces. Rocket and drone attacks blamed on Iranian-backed militia groups have targeted the Ain al-Asad base in the Sunni-dominant western Anbar region at least four times in just over a month.

The Egyptian body responsible for issuing online religious guidance, Al-Azhar, has issued a fatwa against popular video game Fortnite. The Muslim scholars took issue with a scene in the game that appears to show the destruction of the Kaaba shrine at Mecca, Islam's holiest site. Rasha Mahmoud reports that Al-Azhar caused a social media uproar by announcing plans to ban any electronic game that incites violence or spreads falsehoods about Sharia.

5. Is Israel’s army too small?

Outgoing Israel Defense Forces (IDF) deputy chief of staff Eyal Zamir raised eyebrows when he warned recently that Israel’s army is too small to defend itself from future threats. Ben Caspit’s latest for Al-Monitor delves into declining Israeli troop numbers and the state of defense spending.

“The IDF is suffering a personnel shortage, especially in the field combat units,” Caspit writes. “One of the root causes of this crisis is the growth of the Arab and ultra-Orthodox Jewish populations, who are not conscripted,” yet account for nearly half of those draft-aged in Israel. To offset the decline in recruits, IDF Operations Chief Aharon Haliwa has suggested Israel form a national guard that could bolster police forces when the IDF is called away in times of war.

6. The child beggars of Gaza’s cemeteries

Mervat Ouf has this gut-wrenching story of the child beggars who wander Gaza’s cemeteries. In hopes of earning a shekel or two from mourning families, children will dust tombstones and water the gravesite’s plants. The besieged Palestinian enclave has witnessed an increase in child begging amid rising rates of poverty and food insecurity. Social workers in Gaza have tried to cut down on begging by enrolling children in vocational centers but say the pandemic and recent conflict with Israel slowed their work.

Ruins from a settlement dating back 4,000 years have been discovered in southern Iraq’s Dhi Qar province. Adnan Abu Zeed reports that the Russian archaeological team working on the site hope to find cuneiform documents in the ancient city. So far, the team has discovered an ancient shipping port, the remains of a temple wall, an oxidized arrowhead, parts of tandoor stoves and clay camel statues dating to the early Iron Age. Dhi Qar was already home to a vast collection of archaeological treasures, including the Great Ziggurat of Ur site from the Sumerian era and a royal tomb.

A Turkish airstrike that set fire to Assyrian farming fields in northern Iraq’s Nahla Valley has raised questions over why authorities in the Iraqi Kurdistan region failed to extinguish the blaze. Left to fend for themselves, villagers have established their own firefighting force — replete with fire-extinguishing backpacks, oxygen masks and reflective vests — in preparation for the next wave of blaze-causing Turkish strikes targeting Kurdistan Workers Party militants in the region.

Joe Snell has more in this video.

Saudi Arabia’s economy is recovering well from the COVID-19 pandemic as the reform momentum continues, the International Monetary Fund’s (IMF) executive board said. Non-oil growth in the kingdom is projected at 4.3% this year, and real GDP is expected to increase by 2.4%. The IMF said investment from Saudi Arabia’s sovereign wealth fund, as well as strong private demand, will offset any growth slowdown caused by fiscal consolidation.

For more on the Gulf country’s economy outlook, read the IMF statement here.