The Takeaway: Would US-Turkey ties get better or worse if Biden wins?

Trump may be Erdogan’s best friend in Washington; Four takes on Iraq, including the increased violence by Iran-linked militias; and Israeli official talks normalization with Ben Caspit 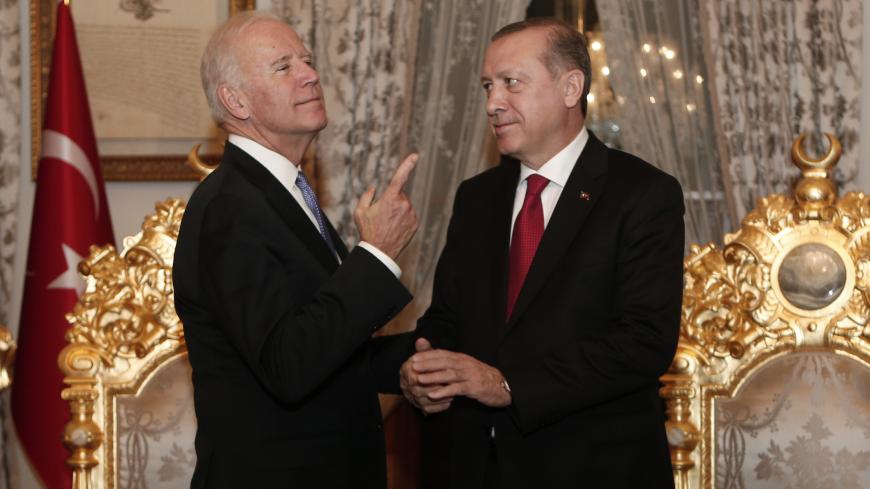 US Vice President Joe Biden (L) gestures next to Turkish President Recep Tayyip Erdogan after a meeting at Yildiz Mabeyn Palace on Jan. 23, 2016 in Istanbul.

Turkey's use of Russian S-400 'incompatible' with role as US, NATO ally, says State Department

Turkish President Recep Tayyip Erdogan has a direct line to US President Donald Trump and has gotten adept at using it, knowing he can always go over the head of lower-level US officials issuing warnings or expressing concerns over Turkey’s conduct, such as the Turkish military’s testing of the Russian S-400 missile defense system last week.

This way of doing business could change, however, if Trump’s Democratic rival, former Vice President Joe Biden, is elected president on Nov. 3.

Erdogan has counted on Trump as his firewall against those in Congress, the Pentagon and elsewhere who are impatient with Turkey over a range of issues. One of the most sensitive is Turkey’s acquisition of a Russian S-400 anti-aircraft missile system. Turkey is a member of the NATO alliance and Congress didn’t take well to the purchase, imposing sanctions last year, but Trump has so far refused to implement them and shows no signs of doing so. Although the State Department warned of "potentially serious consequences" if Turkey operationalized the S-400, and added that the S-400 is "incompatible with Turkey's responsibilities as a NATO Ally and strategic partner of the United States," Erdogan is likely to be unmoved. Absent an ultimatum from Trump, and perhaps even if then, Erdogan is unlikely to back down on the S-400. The Turkish president may be hoarding chits for a give and take on Syria, perhaps, during a second Trump term or, more worrying for Ankara, a less sympatico Biden presidency.

The S-400 test last week is yet another sign that Erdogan doesn’t see Turkey’s future solely as a US and NATO ally. How else to rationalize the purchase of a Russian air defense system? This shift has been happening since at least 2011, when differences began to surface with the United States over Syria. The US military was working with Syrian Kurdish military forces that Ankara considers terrorists. In recent years the friction has increased not only over the S-400 purchase, but also with Turkey’s increasingly assertive posture relative to fellow NATO member Greece in the eastern Mediterranean Sea and its backing of Azerbaijan’s ongoing military adventure in Nagorno-Karabakh as well as Erdogan’s frequent verbal swipes at Western powers.

“There is no saving this relationship,” says Steve Cook of the Council on Foreign Relations in our latest On the Middle East podcast. The next administration, whether it be Trump or Biden, will need to accept that US-Turkey ties will be case by case, not governed by notions of alliance commitments.

Despite the freefall in US-Turkey ties, it would be a mistake to say Ankara is in the Russian camp. Turkey “will keep its options open” with Russia and Iran, says Cook, as all three share an interest in opposition to a US led-order in the region. But as with the United States, Turkey has its differences with Russia. Erdogan and Russian President Vladimir Putin have sometimes clashing interests in Syria and Libya. Putin is also not amused by Erdogan stirring up Azerbaijan to go to war with Armenia, and even more displeased by the Turkish president hosting his Ukrainian counterpart Volodymyr Zelensky to declare a strategic defense partnership and sign military cooperation deals.

The Turkish president is fashioning his own 21st-century non-alignment policy, a unique blend of nationalism, historical grievance, Islamist brotherhood and outsized ambition.  Along for the ride or parts of it are Qatar, Azerbaijan, the Libyan government, Northern Cyprus, Malta, Ukraine and the Palestinians. And if there is friction with the United States and Russia at times, so be it.

“All the global and regional balances are rapidly collapsing to leave their places to new ones,” Erdodgan said on Oct. 20. “Turkey, with its strong political and economic structure, is the rising star of the new global and regional quests. Every intelligent and conscientious person accepts that our country, despite some difficulties it is having, is positively distinguishing itself amid crises.”

Our take:  Trump, Putin and Erdogan, despite differing interests, operate by personal diplomacy. It’s all “art of the deal” when the three talk, and hard feelings and any baggage are left at the door. Without this type of connection, Turkey’s ties with Russia and the United States could easily spiral downward. Even with a second Trump administration, however, it is hard to imagine US-Turkey relations getting better. So what would change with a Biden administration? Well, Biden has the touch for personal diplomacy, but unlike with other world leaders, there is no chemistry with Erdogan. Biden could probably leverage NATO more effectively, but Erdogan doesn’t mind lashing out at the West; that’s a winner with his political base. Biden is also likely to be more sympathetic to Democratic and Congressional concerns about Turkey, including human rights and sanctions over the S-400.

Read more:  Metin Gurcan has a take on whether Turkey’s operationalizing the S-400 is the point of no return in US-Turkey relations.

Four quick takes on Iraq:  Pro-Iran militias not backing down

Iraqi militias linked to Iran are expanding their networks and actions in response to a crackdown by the government of Iraqi Prime Minister Mustafa Al-Kadhimi. Armed groups burned the offices of the Kurdistan Democratic Party in Baghdad last week. “The militias are building an extensive network of influence in Iraq,” writes Ali Mamouri. “They are a military force with a large presence in the military and security sectors. The Fatah bloc represents them in the parliament and so they are part of different ministries. In addition, they are building strong social networking and social pressure groups.”

Kadhimi has vowed justice for the murder of eight young Sunnis in Salahuddin province, reports Shelly Kittleson, as local Sunni and Yazidi leaders and citizens demand action against the rogue, primarily Shiite militias, presumably backed by Iran, who are believed to be behind the violence.

Iraqi cleric Ammar al-Hakim, the head of the Iraqioun parliamentary bloc and Hikma movement, is seeking to chart a nonsectarian alternative to the existing political structure while helping Kadhimi build support in the Council of Representatives. Ali Mamouri has the report.

Iraq has no national day, no anthem

Why can’t Iraqis agree on a national day and national anthem? Omar Al-Jaffal has the story.

In case you missed it:  Podcast scoop with Foreign Ministry director Alon Ushpiz!

Ben Caspit spoke with Alon Ushpiz about Israel’s normalization with the United Arab Emirates and Bahrain and what it means for negotiations with the Palestinians, just hours before Ushpiz boarded the plane with the Israeli delegation to Bahrain to sign the papers establishing ties. Listen here.